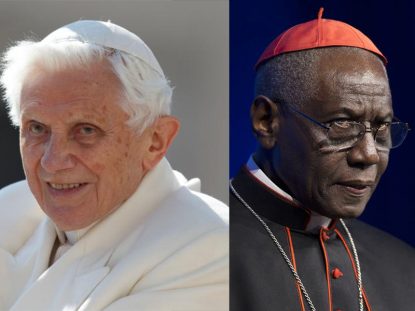 Retired Pope Benedict XVI and Cardinal Robert Sarah, prefect of the Congregation for Divine Worship, co-wrote the newly released book “From the Depths of Our Hearts,” in which they defend priestly celibacy, an issue that was discussed at last year’s Synod of Bishops for the Amazon. (Composite photo; Paul Haring / Bob Roller / Catholic News Service)

VATICAN CITY (CNS) — Since marriage and priesthood both demand the total devotion and self-giving of a man to his vocation, “it does not seem possible to realize both vocations simultaneously,” retired Pope Benedict XVI said in a new book.

“From the Depths of Our Hearts,” a defense of priestly celibacy, has an introduction and conclusion written jointly by the retired pope and by Guinean Cardinal Robert Sarah, prefect of the Congregation for Divine Worship and the Sacraments, and one chapter written by each of them alone.

The book was to be published in English Feb. 20 by Ignatius Press but the French newspaper Le Figaro released excerpts Jan. 12 from the original French edition.

In a chapter signed by both the retired pope and the cardinal, they said the book resulted from an exchange of “ideas and our concerns,” particularly related to the Synod of Bishops for the Amazon, which heard repeated calls for considering the ordination of married elders to serve far-flung communities and provide greater access to the Eucharist and other sacraments.

Pope Francis’ response to the requests of the synod is expected early in the year. Observers noted how unusual it was for the retired pope to intervene publicly on an issue the reigning pope is considering.

Cardinal Sarah and Pope Benedict seemed to recognize how usual the move was, but they wrote, “‘Silere non possum!’ I cannot be silent!”

The two said they offered their reflections “in a spirit of love for the unity of the church.” 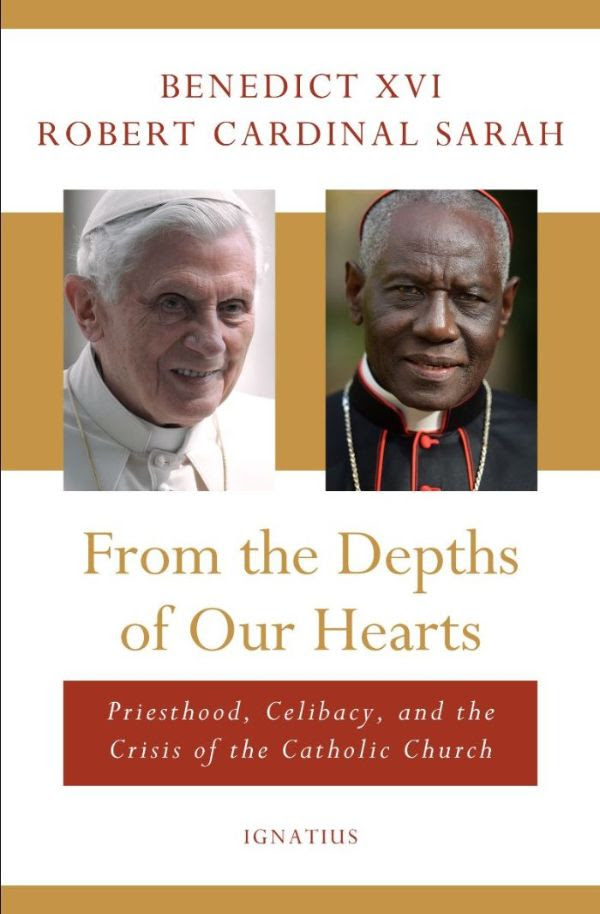 In a separate interview with Le Figaro, Cardinal Sarah said, “If this book is a cry, it’s a cry of love for the church, the pope, the priests and all Christians. We want this book to be read as widely as possible. The crisis facing the church is striking.”

According to the published excerpts, a chapter signed by Pope Benedict noted how today many people assume the gradual adoption of the discipline of priestly celibacy was a result of “contempt for corporeality and sexuality.” The error of that thinking, he said, is demonstrated by the church’s high view of the sacrament of marriage.

And, while acknowledging that celibacy has not always been a requirement for priesthood, he said that married priests were expected to abstain from sexual relations with their wives.

Renouncing marriage “to place oneself totally at the disposition of the Lord became a criterion for priestly ministry,” he said.

The published excerpts do not discuss the continuing practice of ordaining married men in the Eastern Catholic churches nor the exceptions granted by St. John Paul II and Pope Benedict himself to married former ministers of the Anglican Communion and other Christian denominations who become Catholic.

Last January, speaking to reporters flying back from Panama with him, Pope Francis said, “Personally, I believe that celibacy is a gift to the church.”

“I’m not in agreement with allowing optional celibacy,” he said. “A phrase St. Paul VI said comes to mind: ‘I would rather give my life than to change the law on celibacy.'”

Responding to journalists’ questions Jan. 13, Matteo Bruni, director of the Vatican press office, said, “the position of the Holy Father on celibacy is known,” and he quoted the pope’s comments to journalists last January.

But Bruni also included Pope Francis’ statement that “some possibility” could exist for exceptions in remote areas “when there is a pastoral necessity. There, the pastor must think of the faithful.”

In addition, Bruni noted that when Pope Francis addressed members at the end of the synod in October, he said he was pleased that “we have not fallen prisoner to these selective groups that from the synod only want to see what was decided on one or another intra-ecclesial point” while ignoring all the work the synod did in analyzing the problems, challenges and hopes on the pastoral, cultural, social and ecological levels.

NEXT: Deal to build trust lauded in Northern Ireland