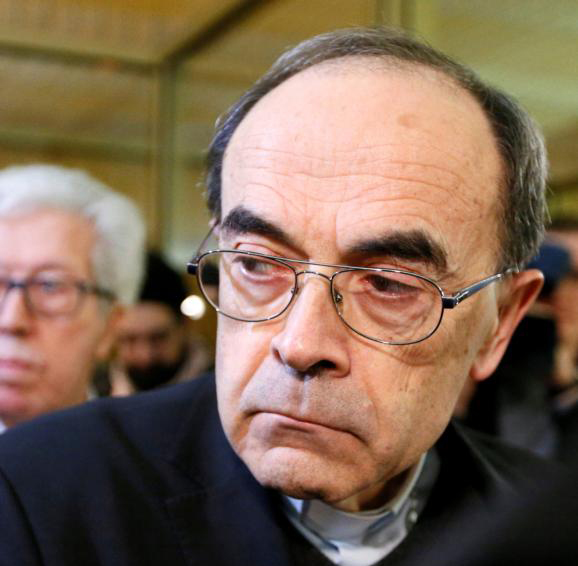 French Cardinal Philippe Barbarin of Lyon arrives at the courthouse Jan. 7, 2019, in Lyon. Cardinal Barbarin has welcomed an appeal court judgment overturning his suspended jail sentence for failing to report abuse by one of his priests, but confirmed he will now ask Pope Francis to allow him to resign. (CNS photo/Emmanuel Foudrot, Reuters)

LYON, France (CNS) — A French cardinal welcomed an appeal court judgment that overturned his suspended jail sentence for failing to report abuse, but confirmed he will ask Pope Francis to allow him to resign.

“This court decision allows me to turn a page and for the church of Lyon to open a new chapter,” Cardinal Philippe Barbarin said at a short news conference. “I will now go to Rome to renew my request. Once again, I will hand over my office as archbishop of Lyon to Pope Francis.”

The 69-year-old cardinal spoke following the Jan. 30 court ruling that quashed the jail term, imposed last March, for failing to report the accusations against Father Bernard Preynat, who currently awaits sentencing for abusing at least 75 boys.

However, lawyers acting for victims of Father Preynat told Agence France-Presse Jan. 30 that the Appeal Court acquittal was “completely questionable in law” and warned they would challenge the judgment.

Prosecutors launched investigations against Cardinal Barbarin in 2016, after claims he had failed to take action against Father Preynat, despite knowing of the abuse accusations.

The priest, now 74, who was defrocked in July 2019, was charged with committing “sexual aggression and rape of minors” while chaplain to a Catholic Scout group between 1971 and 1991 at Lyon’s Saint-Luc Parish. The sentence is expected to be hand down March 16; he faces up to 10 years’ imprisonment.

Cardinal Barbarin, the highest-profile French prelate so far implicated in clerical abuse, confirmed being informed of the priest’s abuse by a former victim in 2014 and told prosecutors at his trial he had informed the Vatican and later removed Father Preynat from his post.

French media said the Appeal Court’s Fourth Correctional Chamber gave no formal explanation initially for its Jan. 30 acquittal of the cardinal, but had later released a 38-page document explaining why it found no “intentional element” indicating a cover-up.

The ruling was welcomed as “logical” by Cardinal Barbarin’s lawyer, Felix Luciani, who told journalists his client had “faced down public rumor and calumny.”

Francois Devaux, president of La Parole Liberee, an association founded in 2015 for Catholic abuse victims, confirmed that victims planned to file a counter-appeal.

“I respect this decision, although it’s the opposite of what I expected — we are still not grasping the reality of sexual abuse against minors,” Devaux told France’s Catholic La Croix daily Jan. 30.

In a Jan. 30 statement, the president of the French bishops’ conference, Archbishop Eric de Moulins-Beaufort of Reims, said the conference had “taken note” of the court ruling and assured Cardinal Barbarin of its “fraternal communion in this new phase of his life, opening in the service of Christ and the church.”

The archbishop also assured the victims of the conference’s “gratitude for the work of truth they are making possible.”

I restated the conference’s “determination to continue the necessary work against sexual abuse and the abuse of power, so that it does not occur again in the church.”

The French bishops’ conference media officer, Constance Pluviaud, told Catholic News Service Jan. 30 that most bishops would be waiting for further information from Cardinal Barbarin and the Lyon Archdiocese about follow-ups to the ruling, adding that it was “too soon” to judge likely reactions among French Catholics.

Matteo Bruni, director of the Vatican press office, acknowledged both the appeals court decision and Cardinal Barbarin’s statement that he would resubmit his resignation to Pope Francis.

As the French bishops’ conference did, Bruni said Jan. 30, “the Holy See reaffirms its closeness to all the victims of abuse in their suffering and to their families and communities,” as well as its closeness to the church of Lyon.

“The Holy Father, who continues to follow closely developments in this painful case, will communicate his decision in due time,” Bruni said.

NEXT: Church must recognize the gifts of older Catholics, pope says