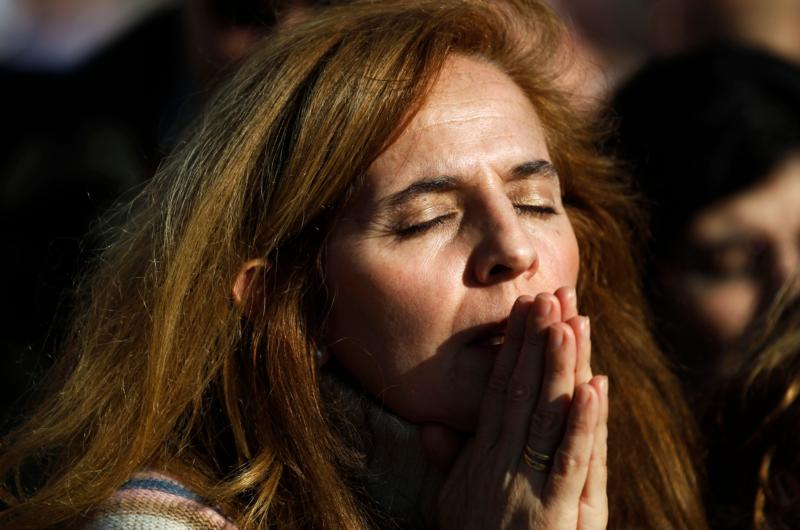 A woman prays during Mass in favor of the traditional family unit in central Madrid in this 2011 file photo. Spanish church leaders voiced concern for their country's future after the government pledged to legalize euthanasia, secularize education and strip the church of "improper assets." (CNS photo/Susana Vera, Reuters)

“Spain faces a critical situation, a true emergency for our future,” Cardinal Antonio Canizares Llovera of Valencia told Catholics in a pastoral letter. He asked that special prayers and Masses be help in Spain “as long as this uncertain future remains unclarified.”

The letter, dated Jan. 4, was circulated just before Prime Minister Pedro Sanchez formally took office Jan. 8 at the head of a coalition government, the first since Spain’s 1978 restoration of democracy. Sanchez had been caretaker prime minister since early 2019.

Cardinal Canizares said his warnings were not “rhetoric or sterile drama,” but a call for the church to “testify to Christ in words and deeds” and help “build a new mentality and a new Spain.”

Another archbishop said he was asking Mary to “save Spain.”

Archbishop Jesus Sanz Montes of Oviedo said in a Jan. 8 tweet: “Uncertainty is drawn on the horizon, but we know the sun will rise behind the clouds and storms. … The sun will bring back color after all the clumsiness, lies and vanity which beset us.”

The coalition parties’ agreement, described by some media as “fragile,” proposes legislation to allow “a dignified death and euthanasia” at public expense and a range of “feminist policies,” as well as further downgrading commemorations of Spain’s former dictator, Gen. Francisco Franco.

It also will “facilitate recovery of assets improperly registered to the church” and guarantee “state secularity and neutrality toward all religious denominations,” removing religious teaching from school curricula and enhancing comprehensive sexuality education.

In a message to Sanchez, who declined the traditional inauguration oath on a Bible and crucifix, Cardinal Ricardo Blazquez Perez of Valladolid, the bishops’ conference president, said church leaders would offer “loyal and generous collaboration” in helping him “work in service of the common good,” believing “authentic religious life contributes to the general good of Spanish society.”

However, in a November statement, the conference warned that restricting religious education risked violating basic rights in the country, where Catholics make up about 67 percent of the 47 million population.

In December, the president of Spain’s Catholic Family Forum accused Sanchez’s acting government of “totalitarian methods” and urged citizens who cared about “the family, life and freedom” to prevent its reforms.

Spain’s Catholic schools confederation, Escuelas Catolicas, which employs more than 82,000 teachers in more than 5,000 schools, also charged Sanchez of “breaking the social consensus” with projected restrictions on religious teaching. It said the right of parents to choose “religious and moral training in line with their convictions” was guaranteed under the constitution, as well as by European Union regulations and international law.

Spain’s Catholic Alfa y Omega weekly said Jan. 9 the new government’s pledge to fight climate change and human trafficking and to pursue “a policy of fair and supportive immigration” could bring it closer to the church’s social doctrine.

NEXT: Indian Court ruling on madrassas to affect Catholic schools