Retired pope backs away from book on priestly celibacy 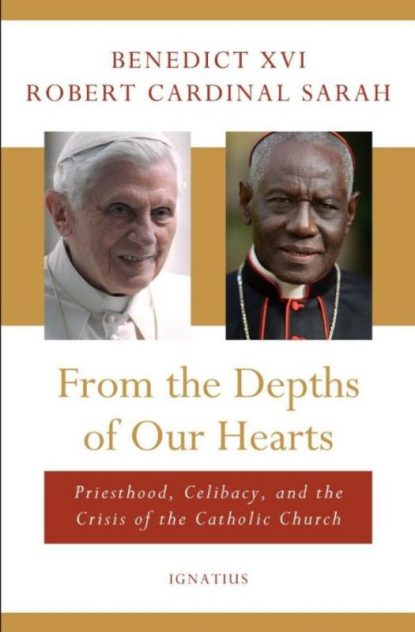 This is the cover of “From the Depths of Our Hearts,” by retired Pope Benedict XVI and Cardinal Robert Sarah, prefect of the Congregation for Divine Worship and the Sacraments. In the book they defend priestly celibacy, an issue that was discussed at last year’s Synod of Bishops for the Amazon. (CNS photo/Ignatius Press)

VATICAN CITY (CNS) — At the request of retired Pope Benedict XVI, his name will be removed as co-author of a book defending priestly celibacy, said Cardinal Robert Sarah, the Vatican official who coordinated work on the book.

“Considering the polemics provoked by the publication of the book, ‘From the Depths of Our Hearts,’ it has been decided that the author of the book for future editions will be Cardinal Sarah, with the contribution of Benedict XVI,” Cardinal Sarah tweeted Jan. 14.

“However,” he said, “the full text remains absolutely unchanged.”

The tweeted announcement came only a few hours after Cardinal Sarah had issued a formal statement accusing people of slandering him by saying that while Pope Benedict may have contributed notes or an essay to the book, he was not co-author of it.

Archbishop Georg Ganswein, personal secretary to Pope Benedict, phoned several German news agencies and spoke with the Reuters news agency Jan. 14, saying the retired pope had requested that his name be removed as co-author of the book, its introduction and its conclusion.

The archbishop confirmed that the book’s first chapter, attributed to Pope Benedict, was the work of the retired pope.

Since marriage and priesthood both demand the total devotion and self-giving of a man to his vocation, “it does not seem possible to realize both vocations simultaneously,” retired Pope Benedict wrote in his essay.

The French newspaper Le Figaro published excerpts of the book late Jan. 12 and, almost immediately, some people began questioning just how much of the work actually was written by the 92-year-old former pope.

The introduction and conclusion were attributed jointly to the retired pope and to Cardinal Sarah, prefect of the Congregation for Divine Worship and the Sacraments; the book has two other chapters, one attributed to each of them alone.

The book was to be published in French Jan. 15 and in English Feb. 20 by Ignatius Press.

In a statement Jan. 14, Ignatius Press indicated its edition would still credit Pope Benedict as co-author.

The correspondence released by Cardinal Sarah indicate he and Pope Benedict “collaborated on this book for several months,” the Ignatius Press statement said. “A joint work as defined by the Chicago Manual of Style is ‘a work prepared by two or more authors with the intention that their contribution be merged into inseparable or interdependent parts of a unitary whole,'” therefore, “Ignatius Press considers this a coauthored publication.”

Given Pope Benedict’s declining health and energy, many questions were raised about just how much of what was attributed to him was written by him and about the decision to list “Benedict XVI” as co-author of the book, rather than “Joseph Ratzinger/Pope Benedict XVI,” the form he used for his series of books on Jesus of Nazareth.

At the end of a day of questions and accusations posted on Twitter, Cardinal Sarah tweeted early Jan. 14: “Attacks seem to imply a lie on my part. These defamations are of exceptional gravity.”

And, as “the first proofs of my close collaboration with Benedict XVI to write this text in favor of celibacy,” he tweeted photographs of correspondence from the retired pontiff.

In the first letter, dated Sept. 20, Pope Benedict said that before receiving a letter from Cardinal Sarah dated Sept. 5, he already had “begun to write a reflection on priesthood. But while writing I increasingly felt my energies would no longer allow me to edit a theological text.”

“Then your letter arrived with the unexpected request for a text precisely on priesthood with particular attention to celibacy,” the retired pope continued. “So, I took up my work again and will send you the text when it is translated from German into Italian. I will leave it up to you to decide if these notes, whose inadequacy I strongly feel, can have some usefulness.”

In a brief note posted by Cardinal Sarah and dated Oct. 12, Pope Benedict wrote that “finally I can send you my thoughts on the priesthood. I leave it up to you if you can find some usefulness in my poor thoughts.”

In a formal statement released Jan. 14, Cardinal Sarah said that after meeting Pope Benedict Sept. 5, he wrote to the retired pope saying that with debate about mandatory priestly celibacy already begun before the Synod of Bishops for the Amazon, he realized Pope Benedict might not think the timing was right for him to intervene on the subject because of “the polemics it could provoke in the newspapers.”

Nevertheless, the cardinal said, he believed a contribution from Pope Benedict would be a gift to the whole church and “could be published at Christmas or at the beginning of 2020.”

Cardinal Sarah said Pope Benedict gave him “a long text” on Oct. 12 and he realized that rather than publishing it in a journal or magazine, it would be more appropriate as part of a book.

“I immediately proposed to the pope emeritus integrating his own text and mine for the publication of a book that would be an immense good for the church,” the cardinal said.

After several exchanges, he said, on Nov. 19 he sent “a complete manuscript to the pope emeritus comprising, as we had decided by mutual agreement, the cover, an introduction and a common conclusion, the text of Benedict XVI and my own text.”

The cardinal tweeted a photo of a letter dated Nov. 25 in which Pope Benedict thanked him “for the text added to my contribution and for the whole elaboration you have done.”

“For my part, the text can be published in the form you envisaged,” Pope Benedict added.

The chapter attributed to Pope Benedict is about 25 pages long, including a six-page reprint of the homily he gave at the chrism Mass in St. Peter’s Basilica in March 2008 on the meaning of “being a priest of Jesus Christ,” specifically in standing in the presence of God and serving him. The homily did not mention celibacy.

In a chapter originally attributed to both the retired pope and the cardinal, they said the book resulted from an exchange of “ideas and our concerns,” particularly related to the Synod of Bishops for the Amazon, which heard repeated calls for considering the ordination of married elders to serve far-flung communities and provide greater access to the Eucharist and other sacraments.

Pope Francis’ response to the requests of the synod is expected early in the year. Observers noted how unusual it was for the retired pope to intervene publicly on an issue the reigning pope is considering.

Cardinal Sarah and Pope Benedict seemed to recognize how unusual the move was, but the introduction said, “‘Silere non possum!’ I cannot be silent!”

The introduction said the two offered their reflections “in a spirit of love for the unity of the church” and in “a spirit of filial obedience to Pope Francis.”

In a separate interview with Le Figaro, Cardinal Sarah said: “If this book is a cry, it’s a cry of love for the church, the pope, the priests and all Christians. We want this book to be read as widely as possible. The crisis facing the church is striking.”

According to the published excerpts, the chapter signed by Pope Benedict noted how today many people assume the gradual adoption of the discipline of priestly celibacy was a result of “contempt for corporeality and sexuality.” The error of that thinking, he said, is demonstrated by the church’s high view of the sacrament of marriage.

And, while acknowledging that celibacy has not always been a requirement for priesthood, he said that married priests were expected to abstain from sexual relations with their wives.

Renouncing marriage “to place oneself totally at the disposition of the Lord became a criterion for priestly ministry,” he said.

The published excerpts did not discuss the continuing practice of ordaining married men in the Eastern Catholic churches nor the exceptions granted by St. John Paul II and Pope Benedict to married former ministers of the Anglican Communion and other Christian denominations who become Catholic.

Last January, speaking to reporters flying back from Panama with him, Pope Francis said, “Personally, I believe that celibacy is a gift to the church.”

“I’m not in agreement with allowing optional celibacy,” he said. “A phrase St. Paul VI said comes to mind: ‘I would rather give my life than to change the law on celibacy.'”

Responding to journalists’ questions Jan. 13, Matteo Bruni, director of the Vatican press office, said, “the position of the Holy Father on celibacy is known,” and he quoted the pope’s comments to journalists last January.

But Bruni also included Pope Francis’ statement that “some possibility” could exist for exceptions in remote areas “when there is a pastoral necessity. There, the pastor must think of the faithful.”

In addition, Bruni noted that when Pope Francis addressed members at the end of the synod in October, he said he was pleased that “we have not fallen prisoner to these selective groups that from the synod only want to see what was decided on one or another intra-ecclesial point” while ignoring all the work the synod did in analyzing the problems, challenges and hopes on the pastoral, cultural, social and ecological levels.