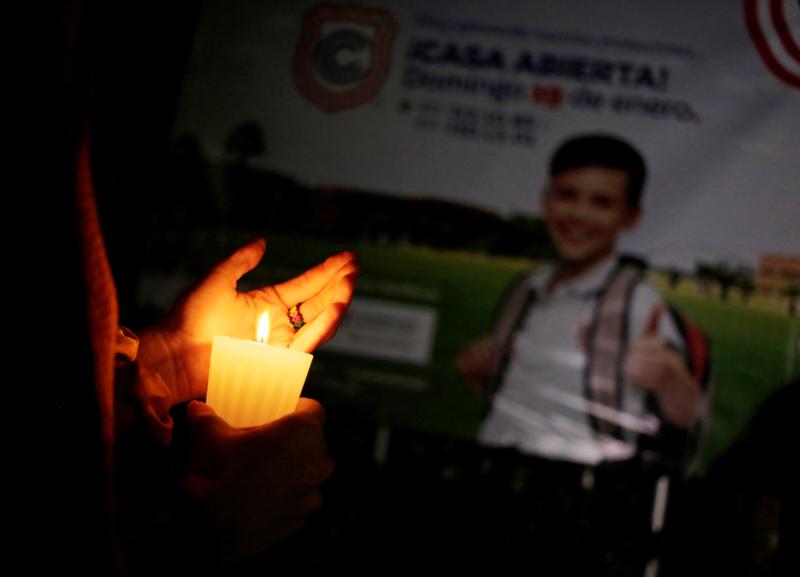 A woman in Torreon, Mexico, holds a candle outside the Colegio Cervantes school Jan. 10, 2020, after a shooting that same day. An 11-year-old student killed a teacher and wounded six other people. The shooter is believed to have killed himself, according to police. (CNS photo/Daniel Becerril, Reuters)

MEXICO CITY (CNS) — Mexican bishops offered prayers for the victims of a school shooting, perpetrated by an 11-year-old student, that killed a teacher and wounded six others. The gunman is believed to have killed himself, according to police in the northern city of Torreon.

“We elevate our prayers to God for the eternal rest of the teacher and student of the Colegio Cervantes in our city. Hearing this news fills us with pain and causes us to lift our gaze toward heaven to find comfort and peace,” Bishop Luis Martin Barraza Beltran of Torreon said in a statement Jan. 10.

“Let us strive each day so family unity and dialogue allows us to build new relationships based in love and respect for others.”

The Jan. 10 shooting shocked Mexico, where 13 years of drug cartel-driven violence has left more than 200,000 dead and approximately 65,000 missing. But the violence convulsing the country had yet to erupt in schools, and not in the form of massacres such have occurred in U.S. schools.

Coahuila state officials say the perpetrator brought two weapons to school and fired nine shots. Media reports said the boy’s mother had recently died and he had been abandoned by his father.

Coahuila Gov. Miguel Angel Riquelme suggested the boy had been influenced by violent video games, though motives for the attack remain unclear.

The shooting brought about contentious speculation and uncomfortable questions about Mexico’s climate of violence and how it influenced young people raised during the country’s crackdown on drug cartels.

In a Jan. 13 statement, the Mexican bishops’ conference called for action to “build a humanity that reverses the culture of death” and stressed the importance of education, saying, “It is urgent to dedicate the highest and best human resources and materials to education, mainly in the family, school and social environments.”

It added, “We commit ourselves again to be a church that continues the labor of promoting human dignity through the formation of each person.”

PREVIOUS: Retired pope backs away from book on priestly celibacy