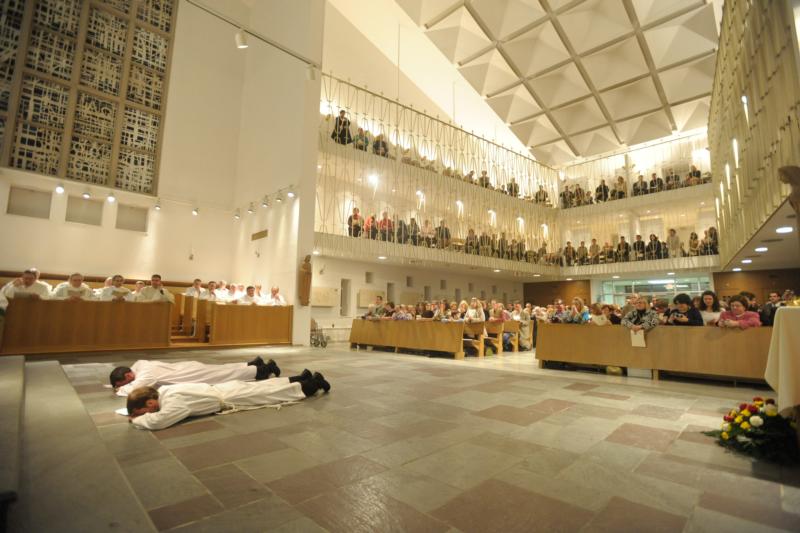 Men lie prostrate during a 2010 ordination at Christ the King Seminary in East Aurora, N.Y. in the Buffalo Diocese. Albany Bishop Edward B. Scharfenberger, apostolic administrator of the Diocese of Buffalo, said Feb. 4, 2020, that the seminary's board of trustees decided the seminary would "cease operations" after determining that a decade of losses averaging $500,000 per year could no longer be sustained. (CNS photo/Patrick McPartland, Western New York Catholic)

BUFFALO, N.Y. (CNS) — Citing annual operating losses and declining enrollment, the Diocese of Buffalo announced it will close its seminary at the end of the academic year.

Bishop Edward B. Scharfenberger of Albany, New York, apostolic administrator of the diocese, said Feb. 4 that Christ the King Seminary’s board of trustees decided the seminary would “cease operations” after determining that a decade of losses averaging $500,000 per year could no longer be sustained.

The seminary has 26 seminarians enrolled this academic year, about 10% of its capacity, the bishop said. The number includes two men who are preparing for ordination June 6 and 11 seminarians from other dioceses.

“This isn’t just about numbers on a balance sheet that no longer add up. We are fully committed to attracting, educating and forming priests for the future needs of our diocese,” Bishop Scharfenberger said in a video message posted Feb. 4 on the Diocese of Buffalo’s website.

The bishop said he had appointed a committee to look at other models for the formation of priests and to recommend how best to promote and cultivate vocations. It also is tasked with seeking ways to provide ongoing education for men preparing for the permanent diaconate, people in pastoral ministry and theological training for lay men and women.

The review offers a “unique opportunity to reimagine priestly formation guided by the understanding that it is the entire community of faith which is responsible for fostering vocations,” he said.

Other factors considered by trustees before deciding to close the seminary include the need for capital improvements to the seminary’s more than 60-year-old facilities, increasing operating costs and expected costs related to maintaining accreditation standards, the bishop said.

“Moreover, reserves that have been sustaining the institution despite persistent deficits are expected to be depleted over the next 18 months,” the diocese said in a news release.

Bishop Scharfenberger said the committee also plans to look at what might be done with the seminary’s 132-acre campus in Aurora, 20 miles southeast of Buffalo, after the closing.

The announcement of the closing came days after Bishop Scharfenberger told the Western New York Catholic, newspaper of the Buffalo Diocese, that diocesan officials are nearing a decision on filing for bankruptcy and reorganization under Chapter 11 after the diocese reported a $5 million loss for fiscal year 2019.

The diocese cited consequences of the clergy sexual abuse scandal for the loss.

More than 220 lawsuits have been filed against the diocese under New York’s Child Victims Act, which suspended the statute of limitations of abuse claims for one year beginning last August.

The abuse crisis led to the early retirement of Bishop Richard J. Malone in December. For more than a year, he has faced questions about how he has addressed the clergy sex abuse crisis, particularly a situation involving two priests’ relationship with a seminarian that he has called “a very complex, convoluted matter.”

Pope Francis accepted Bishop Malone’s resignation Dec. 4 and the same day appointed Bishop Scharfenberger as apostolic administrator of Buffalo. At 73, Bishop Malone is two years shy of the age at which bishops are required by canon law to turn in their resignation to the pope.

Several seminarians also reported in 2019 that they had heard lewd comments allegedly made by diocesan priests at a party. The incident led to the temporary suspension of three priests.

NEXT: Trump tears into Democrats at prayer breakfast amid calls for unity