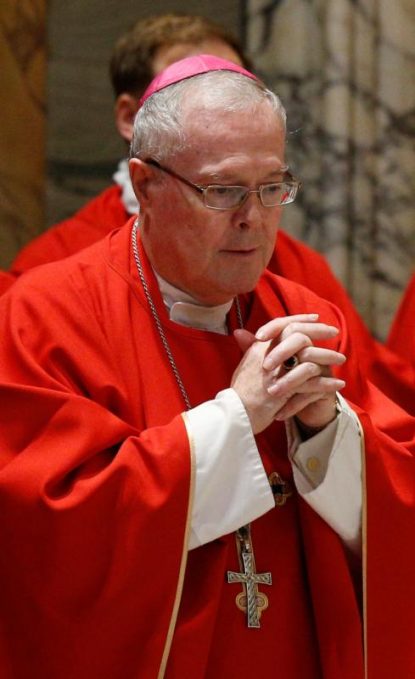 Bishop Michael J. Hoeppner of Crookston, Minn., concelebrates Mass at the Basilica of St. Paul Outside the Walls in Rome Jan. 15, 2020. The Vatican Congregation for Bishops has authorized Archbishop Bernard A. Hebda of St. Paul and Minneapolis to conduct a further investigation into allegations Bishop Hoeppner thwarted a police or canonical investigation of clerical sexual misconduct in his diocese. (CNS photo/Paul Haring)

ST. PAUL, Minn. (CNS) — The Vatican Congregation for Bishops has authorized Archbishop Bernard A. Hebda of St. Paul and Minneapolis to further investigate claims that Bishop Michael J. Hoeppner of Crookston, Minnesota, interfered with an investigation of clerical sexual misconduct, according to a Feb. 4 statement from the archdiocese.

Judge Tim O’Malley, director of the Office of Ministerial Standards and Safe Environment for the Archdiocese of St. Paul and Minneapolis, will oversee the investigation, serving as the archbishop’s delegate.

The statement, which also was posted on the Crookston diocesan website, says that the investigation will continue to look into claims that the bishop, “had engaged in ‘acts or omissions intended to interfere with or avoid civil or canonical investigations of clerical sexual misconduct’ as prescribed by the ‘motu proprio,’ ‘Vos Estis Lux Mundi’ (‘You are the light of the world’).”

Pope Francis promulgated the “motu proprio” (on his own initiative) in May 2019 to set new worldwide norms for reporting sexual abuse and to hold bishops accountable for abuse and/or its cover-up.

It states that if a bishop is accused of misconduct, the Vatican will mandate that his metropolitan archbishop investigate the claim. As archbishop of St. Paul and Minneapolis, Archbishop Hebda is the metropolitan of the bishops in Minnesota, North Dakota and South Dakota.

Bishop Hoeppner, 70, is reportedly the first sitting U.S. bishop to be investigated under the new norms. In September 2019, The Catholic Spirit, newspaper of the St. Paul and Minneapolis Archdiocese, reported that Archbishop Hebda had been mandated to conduct a preliminary investigation of Bishop Hoeppner’s actions.

Archbishop Hebda noted at that time he had engaged qualified laypeople, including staff from the archdiocese’s Office of Ministerial Standards and Safe Environment and its Ministerial Review Board, to conduct the investigation.

In November, Archbishop Hebda announced he had submitted a report about the investigation to the Congregation of Bishops, and that the Vatican would determine the next steps.

While Archbishop Hebda has not disclosed the claims against Bishop Hoeppner, the bishop has been publicly accused of trying to cover up allegations of sexual abuse against a priest of the diocese, Msgr. Roger Grundhaus.

Ron Vasek, a Catholic layman, accused the priest of sexually abusing him when he was a teenager in 1971. Vasek said during a May 2017 news conference that Bishop Hoeppner tried to pressure him to recant the accusation in 2011 and again in 2015, when he was a candidate for diaconate ordination. He was not ordained. The bishop has repeatedly denied the allegations.

According to the Diocese of Crookston, the allegation against Msgr. Grundhaus was reported to law enforcement in 2011.

In May 2017, Vasek filed a lawsuit against Bishop Hoeppner. Four months later, the diocese announced Bishop Hoeppner had reached a settlement agreement with Vasek that includes a statement that there was no admission of unlawful conduct on the bishop’s part.

The Diocese of Crookston’s website lists Msgr. Grundhaus as retired and on leave from public ministry. His name does not appear on the diocese’s list of priests with credible claims of child sexual abuse against them.

As Archbishop Hebda’s investigation continues, the Congregation for Bishops has specified that Bishop Hoeppner’s “faculty to deal with cases of sexual abuse against clerics of the Diocese of Crookston” is transferred to Archbishop Hebda for the duration of the investigation, according to the archdiocese’s statement.

The Diocese of Crookston, where Bishop Hoeppner has served since 2007, encompasses 14 counties in northwest Minnesota.