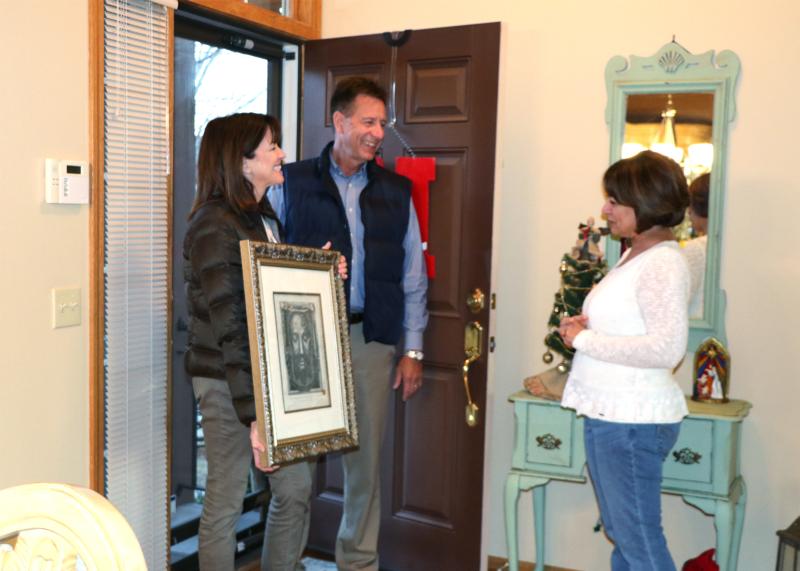 OMAHA, Neb. (CNS) — Ian Snyder first heard about the Holy Face of Jesus devotion at a Mass at the Holy Family Shrine outside Gretna, Nebraska. The His Holy Face apostolate in Omaha was promoting it, and initially, he avoided their information table.

“It seemed very intense. For a lot of people, it can be off-putting. It’s not the happy thumbs-up Jesus,” said the 34-year-old member of St. Peter Parish in Omaha.

Yet he felt drawn to learn more. A few months later, he and his wife, Jamie, who were preparing to enter the Catholic Church at the 2019 Easter Vigil, contacted the apostolate and asked for a “home visit.”

The visit involves receiving a volunteer who leaves a picture of the Holy Face, based on the image that Jesus’ face left on Veronica’s veil during his passion, and asks the recipient to complete a nine-day novena and nine-day daily rosary. At the novena’s conclusion, the volunteer returns and says a prayer consecrating the home and family to the Holy Face of Jesus.

Robert and Jeanna Faulhaber, members of St. Bernard Parish in Omaha and founders of the His Holy Face apostolate, the Catholic nonprofit that spreads the devotion, facilitated the Snyders’ home visit.

At the visit they explained that:

— The devotion to the face of Jesus sprang up within 100 years of the church’s founding. It comes from the tradition that when Veronica wiped the sweat and blood from Jesus’ face on his way to Calvary, the image was imprinted on the cloth. The sixth Station of the Cross commemorates the event.

The devotion has received papal approval and has been adopted by several saints throughout the years.

St. Therese of Lisieux and her entire family had a strong devotion to Jesus’ face. Her full religious name was “Therese of the Child Jesus and the Holy Face.”

“As they shared, I thought, ‘Wow, this is the real deal,'” Snyder told the Catholic Voice, Omaha’s archdiocesan newspaper. He had tried to research the devotion before the visit but said information was hard to find.

So during the home visit, Snyder offered to help the Faulhabers create an app for both iPhone and Android so people could easily access information about the Holy Face.

The Faulhabers said it was an answer to prayer. “We want to shout it from the mountain tops. We want to share it with everybody,” said Robert about the devotion, which he has had since childhood, thanks to his grandmother and mother.

The app, which launched Oct. 28, 2019, is an electronic pocket prayer book, according to Robert, with access to images, vocal prayers, video teachings and music. It is available in 146 countries and has already been downloaded in Canada, the Philippines, South Africa, Uganda and the United States.

The Faulhabers planted the seeds of their apostolate in November 2014 when Robert spoke with Father Michael Voithofer, then associate pastor of St. James Parish in Omaha, and now associate pastor of St. Gerald Parish in Ralston, Nebraska. They discussed the need for a “neglected” Mass on the feast of the Holy Face of Jesus on Shrove Tuesday, the day before Lent begins on Ash Wednesday.

“Without hesitation, Father said, ‘I love it,'” reported Robert about Father Voithofer’s response to holding and celebrating the Shrove Tuesday Mass.

The Faulhabers began home visits in 2017. As interest grew, they formed a religious nonprofit, His Holy Face Inc., in 2018 to provide literature, images, prayer cards and medals on HisHolyFace.com and at Catholic events.

Kim and Chuck Zurcher, members of St. Columbkille Parish in Papillion, Nebraska, attended the Shrove Tuesday Mass in 2016 and signed up for a home visit, which occurred that August. Kim made the association between a photo she had seen of St. Therese holding an image of Jesus’ face and the image the Faulhabers brought to their home.

“I remember thinking that’s really a distressful picture of Jesus,” she said, adding she believes the distress comes from the knowledge of how current secular culture or ignoring personal conscience can work against what Jesus did out of love.

“One of the pieces of literature says, ‘Those who gaze upon my face are already consoling me.’ I find that comforting,” said Kim. She and her husband have joined the Faulhabers in offering home visits.

Snyder called looking at his face very countercultural. “You are being confronted with the violence done to Jesus, and that is uncomfortable. It forces you to review your life in the moment and throughout the day.

“If you knew me, it’s a miracle I’m making Catholic apps. My whole life has been making video games,” said Snyder, who teaches virtual reality and game development at Metropolitan Community College.

“I had a pretty radical conversion. I wasn’t even baptized. I wasn’t an atheist. I was more agnostic and identified as pagan,” he said.

“They didn’t pay me. It’s something I felt called by God to do. For me that’s a minor miracle — maybe not a miracle with a capital ‘M,’ but it’s (the devotion and working on the app) made my relationship with God very real to specifically be doing something to further the knowledge of this devotion.”

The Faulhabers said they have heard of many miracles associated with prayerfully reflecting on the face of Jesus. Robert points to over 6,000 recorded miracles in Tours, France, beginning in 1851 with a devotion to the Holy Face promoted by Leo Dupont, known as “The Holy Man of Tours,” and an image of the Holy Face he displayed with a vigil lamp.

Dupont is a candidate for sainthood. He was declared “Venerable” by the Vatican during Pope Pius XII’s pontificate and currently awaits a verified miracle for his beatification. In general, second such miracle would be need for his canonization.

“That’s just one place (Tours). There are countless miracles that continue to happen today,” said Robert, adding, “Jesus’ face literally changes hearts. If you gaze on his face, I imagine he has something different to say to each of us.”

Wells writes for the Catholic Voice, newspaper of the Archdiocese of Omaha, Nebraska.

NEXT: After struggle to cope, abuse survivor finds ‘healing in heart of church’