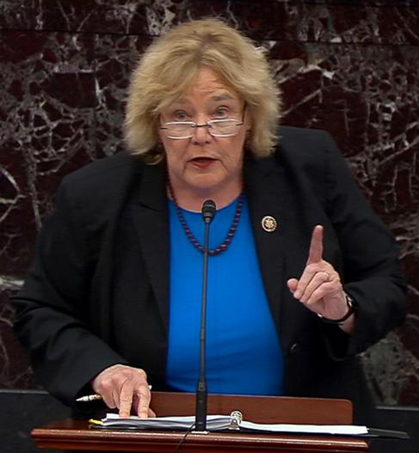 WASHINGTON (CNS) — Lawmakers heard about the lack of resources, including lack of working audio and video equipment, lack of access to language interpretation and overall the staggering backlog of 1 million cases and countless lives tied up in the nation’s immigration courts.

“For far too long, our immigration courts, housed under the (U.S.) Department of Justice, have not functioned as they should,” said U.S. Rep. Zoe Lofgren, D-California, chair of the House Judiciary Subcommittee on Immigration and Citizenship, during a Jan. 29 hearing.

Judges and immigration court attorneys from around the country unloaded example after example on lawmakers, saying the disarray is leading to a lack of due process for asylum-seekers and others waiting for decisions that can profoundly affect their lives.

They clamored for a separate immigration court system, one independent from the Department of Justice and from the politics of Democrats and Republicans.

The backlog of 1 million cases has pushed the system to the brink and although the Trump administration claims that many of its policies have been intended to reduce the backlog “it appears that things are only getting worse,” said Lofgren, who said she backed the idea of separating immigration court from the Justice Department.

That causes great concerns for immigration attorneys such as Jeremy McKinney, a North Carolina attorney, who testified on behalf of the American Immigration Lawyers Association.

“Our immigration court system has a conflict of interest built into it,” he said to members of the subcommittee, citing political involvement. “Judges must be allowed to act as neutral arbiters of facts and law regardless of who’s in power. Instead, this administration and, importantly, other administrations before it, they exploited the structure … to further political agendas.”

He said even the outcome of a case can vary depending on where it is filed. If he files a case in a place such as Arlington, Virginia, his client has a 50% chance of being granted asylum, but if that case is taken down to Atlanta, the denial rate jumps to 97%, he said.

“That is not the kind of justice that Americans want,” he said, adding that justice should be removed from political pressure.

But some, like U.S. Rep. Ken Buck, R-Colorado, a ranking member of the subcommittee, placed the cause of the problem on what he said were the high numbers of immigrants entering.

“Not one of you mentioned the cause of why we’re here, and that is people breaking our law and crossing our border,” he said. “The truth is the backlog is caused by more illegal immigrants coming into this country and ending up in your court.”

He then said that when someone comes into the country “illegally,” then “we’re supposed to say you get a judge, not only do you get a judge, who’s a Department of Justice employee, but you get a judge who’s independent and unaccountable to elected officials? … You get a lawyer, some people are advocating, for breaking the law?”

McKinney said the Constitution mentions “due process,” and “unless we choose to go down a road where we’re debating whether undocumented workers are people, they have rights,” he said.

But the argument of the concerned lawyers and judges, McKinney said, “is that both administrations have botched this up, whether it’s Democrat or Republican, because, fundamentally at the core, you have that administration’s political proclivities, directing what is supposed to be mutual and fair process.”

There is middle ground, he said, adding that making immigration court an independent body was a nonpartisan issue.

But some organizations have taken issue with the Trump administration’s handling of recent cases, including the Catholic Legal Immigration Network Inc., which along with other agencies entered a statement as testimony before the subcommittee, saying: “Our experiences representing individuals in the immigration courts … recently led us to file a lawsuit challenging the weaponization of the immigration court system to serve the executive branch’s anti-immigrant agenda.”

The statement said that “despite the life-or-death stakes of many immigration cases, the U.S. immigration court system is plagued by dysfunction, neglect and official acquiescence to bias. And under the current administration, the executive branch has gone even further by actively weaponizing the immigration court system against asylum-seekers and immigrants of color. Its actions have created a system in which due process rights are not, and cannot be, protected.”

“These ongoing violations of due process required an immediate response, so we asked the federal courts to intervene and order that the executive branch fulfill its statutory and constitutional duties to oversee a fair and legitimate immigration court system,” the groups’ statement said. ” While the federal courts can and should act to ensure that immigration courts provide, at minimum, basic due process protections, creating a truly independent immigration court system requires a structural remedy provided by Congress.”

The groups said the U.S. attorney general has allowed immigration judges “to violate noncitizens’ due process rights” so it can advance the executive branch’s policy and political goals.

“Judicial bias is pervasive and unchecked in many courtrooms, with judges engaging in aggressive, prejudiced, and unprofessional treatment of respondents rather than providing fair, neutral, and consistent adjudication,” the statement said. “As experienced by immigration practitioners across the country, judicial bias manifests itself in many forms: bullying and harassment from the bench, unsupported negative credibility determinations, and xenophobic and prejudiced statements. In many cases, immigration judges appear to prejudge cases, relying on their own views of respondents’ characteristics or claims instead of on governing law.”

The hearing came as The Associated Press released an article that painted chaos in immigration courts in 11 different cities in the U.S.

Other news agencies also recently released reports about immigration judges choosing to retire early because of punishing caseloads or saying they don’t want to be following guidelines set by the administration set up to deny asylum claims and increase deportations.

Congresswoman Veronica Escobar, a Democrat who represents Texas’ 16th Congressional District, said during the hearing that some hold the “troubling” view that “when we’re talking about access to justice or access to the asylum process … certain people don’t deserve justice,” she said.

“We just want to kind of get rid of the cases and move along and avoid dealing with the fact that we have laws,” she said. “And that we should not have full justice for everyone. So, your voices have been very important in this process,” she told those testifying.

NEXT: Devotion to Holy Face of Jesus rising on home visits, phone app