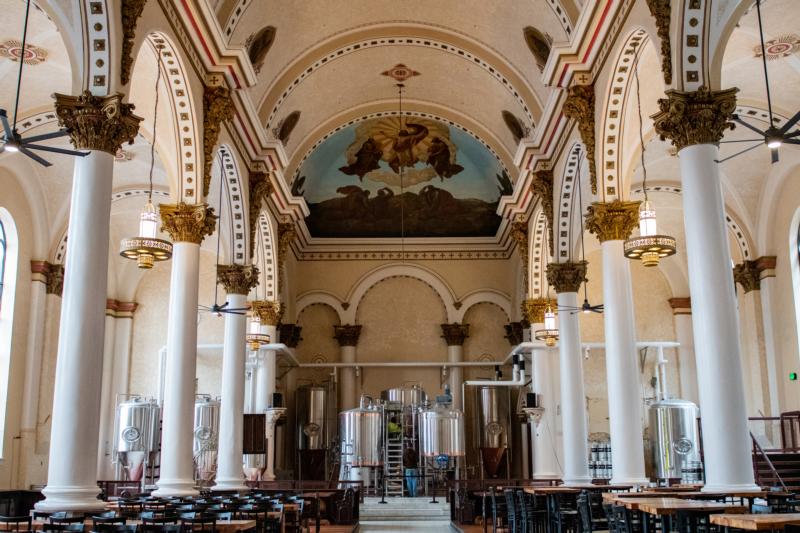 This is an interior shot taken Feb. 4, 2020, inside the former St. Michael the Archangel Church in Baltimore, which has been transformed into a new community gathering space, a brewpub called the Ministry of Brewing. (CNS photo/Kevin J. Parks, Catholic Review)

BALTIMORE (CNS) — Stop me if you have heard this one: A priest walks into a bar — that used to be a church.

But when Father T. Austin Murphy Jr. arrives for the grand opening of the Ministry of Brewing in the old St. Michael the Archangel Church in Baltimore’s Upper Fells Point neighborhood, it won’t be a joke. It will be to witness a dramatic transformation of the historic sanctuary.

The transformation has some in the area bullish on a neighborhood revival, but others are dismayed that what was once was a place for weddings, baptisms and funerals is now a trendy nightclub.

“It certainly is not what the church was built for,” said Father Murphy, pastor of Christ the King Church in Glen Burnie, Maryland. “And certainly, it’s not what the church had served over the hundred-some-odd years that it was operational. But also, what were they going to do with the building?”

“Here’s somebody who’s willing to invest in it as a historical place in the city so that the building will always be there,” Father Murphy said.

The pews, stained-glass windows crafted in Munich and the altar are long gone from St. Michael, which closed some years ago and has since been deconsecrated. The massive statue of the church’s namesake, carved in walnut, sits in a Pennsylvania warehouse waiting for a new home.

But much of the church remains — its soaring ceilings lined with beautiful frescos, its towering Corinthian columns and even its ornate wooden confessional. 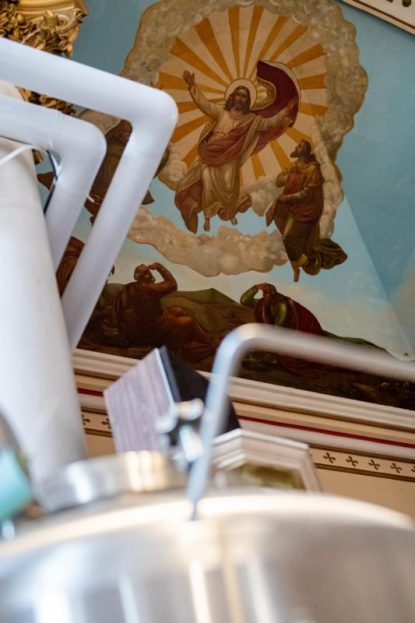 A mural of Christ sits high above the vats at Ministry of Brewing Feb. 4, 2020, in the former St. Michael the Archangel Church in Baltimore. Religious images from the former Redemptorist parish church are in view of the brewpub’s guests. (CNS photo/Kevin J. Parks, Catholic Review)

After weeks of delays, the owners of Baltimore’s newest brewery and brewpub planned to officially open the doors Feb. 7. But how did one of Baltimore’s most historic Catholic churches — built in 1852 to serve German immigrants and once led by St. John Neumann — become a brewery? It’s complicated.

After years of declining attendance and much-needed and expensive repairs, St. Michael was closed, and its mostly Spanish-speaking parishioners were invited to Sacred Heart of Jesus/Sagrado Corazon de Jesus in Baltimore’s Highlandtown neighborhood in 2011.

Owned by the Redemptorist religious order, the sprawling St. Michael campus — which included a school, rectory and parish meeting space — then sat on the market for years looking for a buyer.

“We realized that we, as an order, didn’t have the finances to be able to upkeep that building ourselves,” said Redemptorist Father Paul Borowski, provincial superior for his religious community. “Instead of just letting it disintegrate, how could we somehow get a buyer in there who could keep the exterior of the building and do something else?”

Diane Barr, chancellor of the Archdiocese of Baltimore, said it’s uncommon for a Catholic church in the Baltimore area not to be owned by the archdiocese. Churches owned by the archdiocese have special or “clouded” deeds, which prevent new owners from using the building for certain purposes including gas stations, adult movie theaters, massage parlors and, yes, bars and restaurants.

While some of the same restrictions applied to the St. Michael campus, the bar-and-restaurants language was not part of the deed, Father Borowski told the Catholic Review, the archdiocesan media outlet.

A deal to sell the campus to nearby Johns Hopkins Hospital fell through. Finally, with the buildings in disrepair, Father Borowski said the Redemptorists made the decision to sell the campus for $1.3 million to the owners of the Ministry of Brewing to convert the church into a brewpub and the rest of the campus into apartments.

By the time of the sale, the space had been deconsecrated, which takes the form of a simple written decree, Father Borowski said. But its most holy objects were given to other Catholic churches, including Sacred Heart of Jesus.

Lifelong St. Michael’s parishioner Barbara Aupperley said she was “devastated” by the church’s closure. “When you think of all the funerals, baptisms, marriages, first Communions there. That’s difficult.”

Aupperley, now a parishioner of Sacred Heart of Jesus/Sagrado Corazon de Jesus, said someone in her family had been a parishioner of St. Michael since 1869. She served as a cantor and an extraordinary minister of holy Communion. Her daughter and son-in-law were the last couple to be married at the church just a week before it closed. 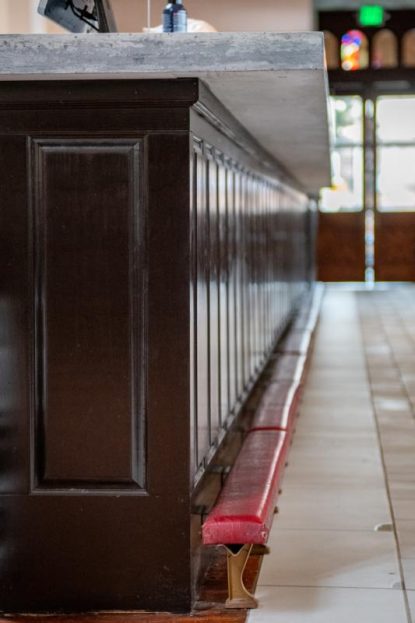 Kneelers are seen below the base of a bar Feb. 4, 2020, inside the former St. Michael the Archangel Church in Baltimore, which has been transformed into a new community gathering space, a brewpub called the Ministry of Brewing. (CNS photo/Kevin J. Parks, Catholic Review)

She gets emotional when she speaks about the church and has no plans to tour the new space.

Barr said the archdiocese prefers to repurpose its unused church buildings for use by another Catholic institution such as Catholic Charities of Baltimore or Mercy Health Systems. When that’s not possible, a second option is to sell the building to another Christian domination.

Ernst Valery, one of the owners of the Ministry of Brewing, said he and his fellow investors spent two years and $2.5 million renovating the space, including adding new heating, air conditioning and electrical systems. They also painstakingly restored the frescos of saints that line the ceiling and other historic details.

Where the altar once stood, large 20- and 40-barrel vats brew beer in-house. A giant stack of beer kegs sits to the side of the old altar area. But while the space has been transformed, staff members said they want to honor the history, be respectful and not make light of the Catholic faith.

“We’re not going to have any tongue-in-cheek names for the beers here,” said Jon Holley, Ministry of Brewing’s general manager.

A Catholic and onetime resident of the neighborhood, Valery sees the newly repurposed campus as a focal point of the neighborhood and the start of a renaissance there. He plans to have students from low-income areas learn chemistry and other lab skills at the brewery as part of a summer program.

Father Murphy is happy there is a new neighborhood gathering place, but he mourns the loss of St. Michael. He said the Ministry of Brewing can serve as a lesson to Catholics to not take their churches for granted.

“If people want to keep those services, we need to evangelize better and they need to evangelize because that is the only way we keep these places open,” Father Murphy said. “If we allow our faith to just sort of fiddle off and wash away and we don’t use the churches, this is going to happen a lot more places.”

Swift is the social media coordinator for the Catholic Review and the Archdiocese of Baltimore.

NEXT: On Camino trek, couple bolsters faith on way to wedding