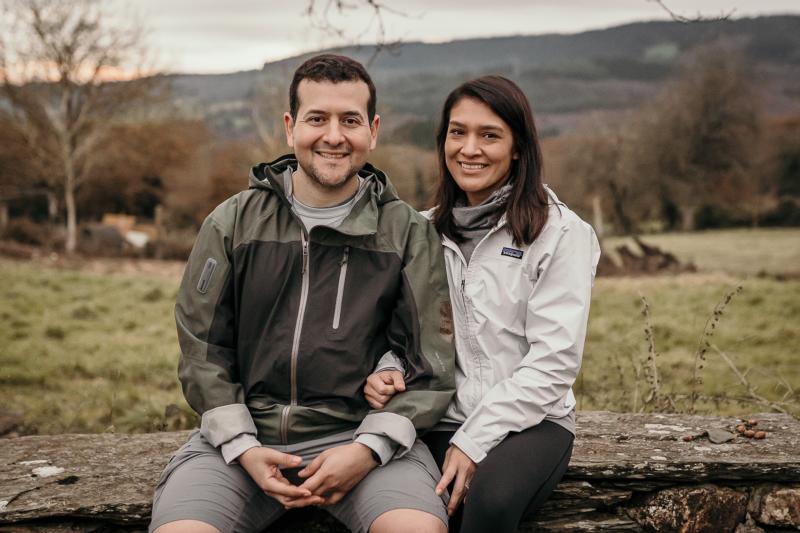 Karla and Jason De Los Reyes, pictured in an undated photo, hiked the Camino de Santiago from Sarria to Santiago, Spain, in the days leading up to their Dec. 12, 2019, wedding. The UNESCO World Heritage Site consists of a network of routes, traveled by pilgrims since the Middle Ages, to the Santiago de Compostela Cathedral, believed to be the burial place of St. James. (CNS photo/courtesy De Los Reyes family)

ARLINGTON, Va. (CNS) — It’s sometimes said that life is a journey. For Karla and Jason De Los Reyes, preparing for their new life together involved a literal journey — traveling 74 miles on foot along the Camino de Santiago in the days leading up to their wedding in Spain.

The couple, who are parishioners of the Cathedral of St. Matthew in Washington, had both hiked the Camino individually — Karla in 2015, Jason in 2018. As they thought about where to get married, they considered El Salvador, where Karla is from originally, and Texas, where Jason is from.

But nothing struck a chord quite like “the Way” — which pilgrims have traveled to the final resting place of the apostle St. James the Greater since the 10th century.

“We referred to our wedding planning as a camino,” said Karla, a kindergarten teacher at the Basilica School of St. Mary in Alexandria, in the Diocese of Arlington.

Armed with a 25-page spreadsheet, the couple zigzagged through Spanish bureaucracy, sans wedding planner, to line everything up for a Catholic wedding last December. They got married Dec. 12, the feast of Our Lady of Guadalupe, at a former monastery, the Pazo de San Lorenzo in Santiago.

“We had a lot of support from our families,” Jason told the Arlington Catholic Herald, the diocesan newspaper. “We packed everything for the wedding and left it with her parents to bring to Spain.” Friends also joined in on long training walks. 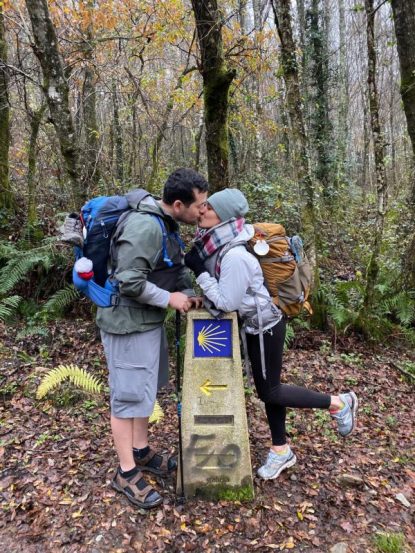 Karla and Jason De Los Reyes, pictured in an undated photo, hiked the Camino de Santiago from Sarria to Santiago, Spain, in the days leading up to their Dec. 12, 2019, wedding.(CNS photo/courtesy De Los Reyes family)

Once they arrived at Sarria, the couple spent three and a half days walking 74 miles of the more than 900 designated by UNESCO as a World Heritage Site.

“There were moments of bliss when we could see the sun rise, or when we would see birds flying side by side, we’d say, ‘That’s like us,’ ” said Karla.

The journey also included things that didn’t go according to plan. On the second day, they only ate once because all the cafes where they had expected to rest were closed for the low season.

On the third day, they arrived at a cafe at 10:30 a.m. — only to find the proprietor wouldn’t make anything except coffee until the afternoon. They filled their empty stomachs with lattes until a larger, more persuasive, group arrived.

It was all a part of the experience, they said.

They would recommend the experience to anyone, single or married.

“You have to have a really solid foundation for your relationship, and you have to realize anything can happen,” said Karla. 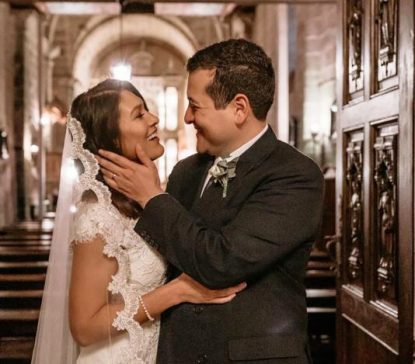 Karla and Jason De Los Reyes celebrate their wedding in Santiago, Spain, Dec. 12, 2019, the feast of Our Lady of Guadalupe. The couple hiked the Camino de Santiago from Sarria to Santiago in the days leading up to their wedding. (CNS photo/courtesy De Los Reyes family)

The couple said they walked away from the experience with much more than stamps in their Camino passports and certificates of completion.

“I think if we can do the Camino together, we can get through life together,” said Jason. “It just felt like this was God’s plan for us.”

National Marriage Week, promoted by the Catholic Church in the United States, is Feb. 7 to 14.

Stachyra Lopez is the social media coordinator at the Arlington Catholic Herald, newspaper of the Diocese of Arlington.