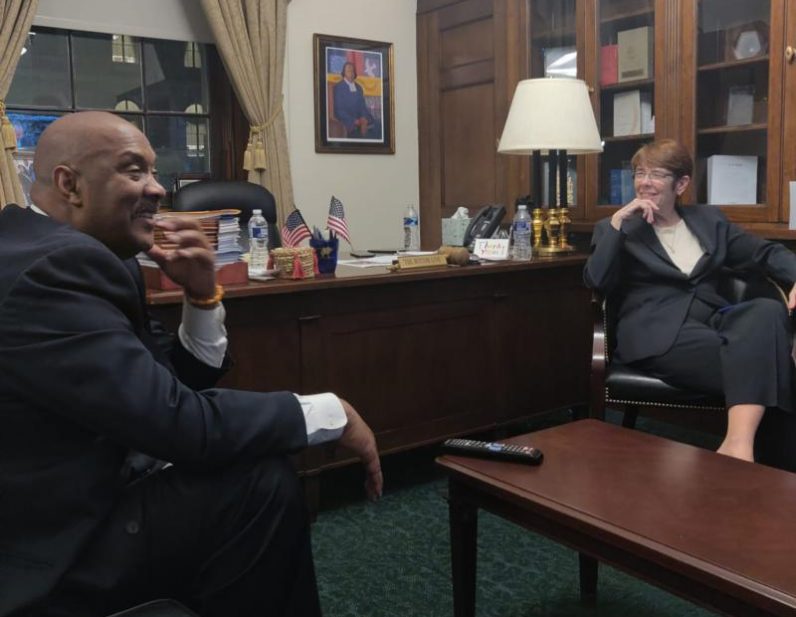 Mercy Sister Mary Scullion meets with Rep. Dwight Evans, D-Pa., Feb. 4, 2020, prior to President Donald Trump’s State of the Union address. Evans invited Sister Scullion, co-founder of Project HOME, which helps the homeless in Philadelphia, as his guest to the president’s address in the Capitol. (CNS photo/courtesy Emmanuel Sofolawe)

WASHINGTON (CNS) — Mercy Sister Mary Scullion, co-founder and executive director of Project HOME, an organization that helps the homeless in Philadelphia, was one of the many guests who attended the Feb. 4 State of the Union, which she hoped would draw attention to homelessness and inspire federal aid to alleviate it.

The woman religious, who took the train to Washington for the speech and left the next day to get back to the work at hand, was invited by Rep. Dwight Evans, D-Pennsylvania.

Members of Congress can bring one guest to the State of the Union, and Evans chose Sister Scullion to “highlight the need for more affordable housing dollars and support of policies to reduce poverty and homelessness.”

He also said in a statement that he hoped her presence also would bring attention to “the need to prevent cuts to programs that help the vulnerable” including the Supplemental Nutrition Assistance Program, known as SNAP, and Social Security disability benefits.

Sister Scullion was not singled out as were some of President Donald Trump’s 11 guests during the televised speech, but she felt she championed her cause in meetings before the address where she discussed homelessness with both Democrats and Republicans in Congress.

These meetings “were the positives” of the visit, she said, adding that she also was encouraged by the number of women she met who said they had been educated by women religious.

“Their Catholic education empowered them to be the leaders they are today,” Sister Scullion told Catholic News Service from the train Feb. 5.

The advocate for the homeless, named one of the “World’s Most Influential People” by Time magazine in 2009 and described in the magazine profile as the “Mother Teresa of Philadelphia,” came to Washington fully aware of who she was representing and kept them at the forefront of her mind.

Staff members and residents of Project HOME gathered to send her off Feb. 4 with “words of encouragement and prayer” she said, stressing that that’s where she finds her strength and inspiration.

She said the State of the Union, and reaction to the president’s words, included “too many moments of division” and only a few examples of unity.

“A lot of the president’s speech was disturbing,” she said, calling out what she described as “an overall distortion of facts” that included the “demonization of immigrants” and a mention of the value of prayer immediately followed by a promise that Americans can keep their guns.

Sister Scullion said she was encouraged by Trump’s message about criminal justice reform and commitment to ensure early childhood education and day care, but she cautioned that these promises should be checked for accuracy.

The woman religious also said she was bothered by the president’s words describing this country as “better than everyone else” and his failure to mention “what needs to be done for millions of Americans still struggling to make it in our economy.”

She said the division, palpable during the State of the Union but also in the country at large, impacts the work she does because “the solution to end homelessness involves all of us as one human family” and needs bipartisan support.

“I go back with a little of both: encouragement and discouragement,” she said.

She also goes back to what she has been leading since 1989, when Project HOME was initially an emergency winter shelter for men. Today, the program reaches out to all the city’s homeless, including many who are addicted or mentally ill, and offers not just shelter but long-term support with housing, jobs, education and medical care to keep people from remaining homeless.

Sister Scullion tweeted about her time in Washington along with pictures of herself with different members of Congress. She said in one tweet that Philadelphia “has the lowest number of unsheltered people of the ten largest cities. What we are doing is working — we just need more.”

She was happy to speak on the behalf of the homeless, but she felt better about returning to them.

As she put it: “I have the greatest job in the world, and I work with the most amazing people.”

NEXT: Trump highlights pro-life, school choice issues in State of the Union