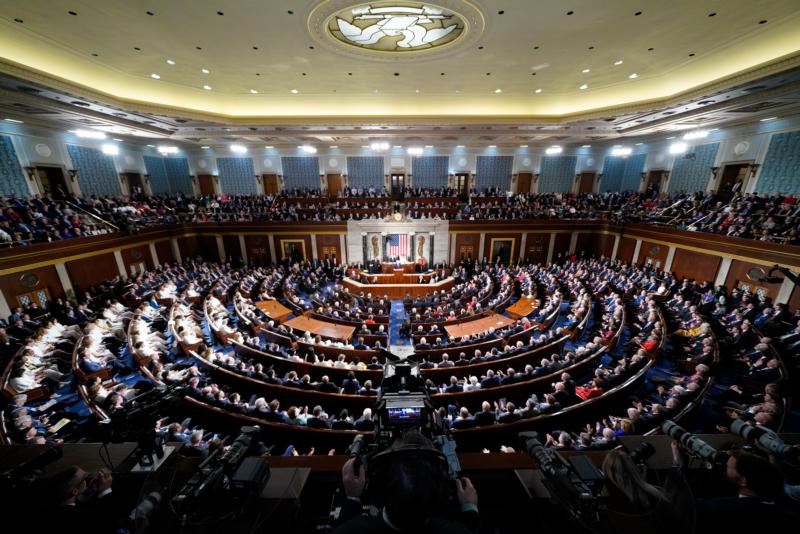 U.S. President Donald Trump delivers his State of the Union address Feb. 4, 2020, at the Capitol in Washington. (CNS photo/Joshua Roberts, pool via Reuters)

WASHINGTON (CNS) — Less than two weeks after pro-life leaders welcomed President Donald Trump to the speakers’ platform at the Jan. 24 March for Life on the National Mall, these leaders were praising a call he issued in his State of the Union address Feb. 4 that Congress immediately ban late-term abortion.

He also urged Congress to provide an additional $50 million to fund neonatal research.

Just before his remarks on such research and late-term abortion, he introduced two of his guests sitting in the first lady’s box in the House chamber: Robin Schneider and her 2-year-old daughter, Ellie. Born at 21 weeks and six days, Ellie one of the youngest babies to survive in the United States.

Robin and her husband, Joel, have described Ellie as being about “the size of a soda can” at birth and not much heavier than one.” The baby girl received care in the Neonatal Intensive Care Unit at St. Luke’s Hospital of Kansas City, Missouri.

“Every human life, born and unborn, is equal in worth and dignity. This truth is especially clear in the later stages of pregnancy when a baby can feel pain,” said Jeanne Mancini, president of the March for Life Education and Defense Fund.

“Protecting babies from abortion after they can feel pain, about 20 weeks into pregnancy, is a common sense and compassionate, not to mention popular, measure that everyone should be able to easily agree upon,” Mancini added in a statement. “If anyone doubts this,” she added, “all they have to do is look at Ellie … a light to her family and the world.”

Kristan Hawkins, president of Students for Life of America, echoed Mancini’s comments, saying: “Ellie’s beautiful face should be a reminder to all of us that with more than 12,000 babies aborted at Ellie’s age (at birth) and even later that we have a moral crisis taking place today in our nation.”

“The value of a human life should not depend on where a child is born,” she added.

Hawkins also praised the president for endorsing a bipartisan proposal in Congress to extend paid leave to families after the birth or adoption of a child. In his State of the Union address, Trump urged lawmakers to pass the measure — the Advancing Support for Working Families Act — that would allow parents to draw on future child tax credits to pay for leave. If they pass it, he said, he’d sign it into law immediately.

“Equipping vulnerable families with their own resources is just common sense, and at Students for Life we have a great concern for pregnant and parenting students … on campuses nationwide,” she said, adding, “President Trump’s plan to help young families shows the kind of compassion needed in public policy.”

School choice also got a shoutout from Trump in his speech, as he focused on two other guests in the House chamber — Janiyah Davis, a fourth grade student from Philadelphia, and her mother, Stephanie.

Trump announced Janiyah would be getting a scholarship to attend the school of her choice and he called for federal legislation supporting school choice. He criticized Pennsylvania Gov. Tom Wolf for vetoing a measure last year that would have expanded a private school choice program in that state.

“No parent should be forced to send their child to a failing government school,” Trump said.

“Giving families, especially low-income and minority families, tuition assistance for private schools like the thousands of Catholic schools across our country puts parents in the driver’s seat when it comes to preparing their kids for the future,” Picciotti-Bayer added.

The Trump administration’s proposal is called Education Freedom Scholarships. It would provide for a $5 billion annual federal tax credit for voluntary donations to state-based scholarship programs.