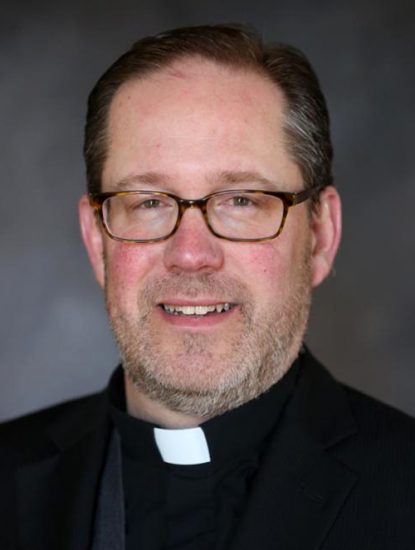 Father Dan Griffith, pastor of Our Lady of Lourdes and a law professor at the University of St. Thomas School of Law, both in Minneapolis, is pictured in a 2019 photo. Father Griffith also is the liaison for restorative justice and healing for the Archdiocese of St. Paul and Minneapolis. Archbishop Bernard A. Hebda appointed him to the newly created position in July. (CNS photo/Dave Hrbacek, The Catholic Spirit)

He has felt the emotional weight and lifting of that weight in a healing circle where people are invited to take turns holding a stone or other “talking piece” and tell their story as others respectfully listen.

“It’s humbling and you’re vulnerable,” Father Griffith said of sharing in a healing circle his story of secondary trauma from the church’s clergy sexual abuse crisis.

The priest is quick to point out that his secondary trauma cannot be compared with the deep and long-standing harm done to those directly traumatized by a priest.

It is vitally important to have the church acknowledge the harm done, foster accountability and offer roads to healing, he said.

In an official capacity with the Archdiocese of St. Paul and Minneapolis, he is helping to spread the concept of healing circles and restorative justice both in the archdiocese and beyond in hopes others impacted by the crisis — particularly those directly harmed by sexual abuse in the church — can begin to heal.

Father Griffith’s story includes being a safe environment delegate in the archdiocese in 2013 and 2014 and reading files about priests accused of sexual abuse. The stress and the deep sadness he felt one evening came back when he talked about it in a healing circle. But sharing helped ease the weight, and even while a delegate, in the midst of that pain, Father Griffith was blessed with Christ’s healing light.

“I remember sensing God saying, ‘This is how much I love you, the church and my children. I go down even into this deep harm and heal it,'” Father Griffith told The Catholic Spirit, the archdiocesan newspaper. “I was laboring under the weight of this, and God said, ‘You can’t carry this yourself. Give it all to me.'”

Now, in addition to being pastor of Our Lady of Lourdes and a law professor at the University of St. Thomas School of Law, both in Minneapolis, Father Griffith is archdiocesan liaison for restorative justice and healing. Archbishop Bernard A. Hebda appointed him to the newly created position in July.

Restorative justice seeks to acknowledge those harmed, identify the nature of the harm and begin the healing process, Father Griffith said. Healing circles, and restorative justice more broadly, include the church’s willingness to take responsibility for the harm done within its walls, he said.

Healing circles came out of Native American cultures. Father Griffith sees the idea as a gift in effect to the broader culture and the church that also aligns with the justice demanded by God and the healing that is possible only through Christ.

His part-time role as liaison has taken him to four parishes in the archdiocese to preach about restorative justice, as well as parishes in other dioceses.

In his role as liaison, Father Griffith works closely with Paula Kaempffer, a survivor of clergy sexual abuse hired by the archdiocese in June as outreach coordinator for restorative justice and abuse prevention. Kaempffer coordinates and publicizes efforts at healing, and searches for new avenues of healing.

“The Archdiocese of St. Paul and Minneapolis has shown great effort under its current leadership to promote justice, restore trust and advance reforms to address the crisis in our church, not only for today but also for future generations,” Smolik said.

Regarding the roles played by Father Griffith and Kaempffer, “as far as we know, the archdiocese’s efforts at restorative justice are rare among Catholic dioceses,” she said.

Currently, Father Griffith is on sabbatical in San Antonio, reading and writing about restorative justice and developing a book on the subject.

He plans to travel in late February to the Diocese of Wheeling-Charleston in West Virginia, where he and Janine Geske, a retired Wisconsin Supreme Court justice and expert in restorative justice, have been invited to talk about the concept as that diocese seeks to recover from a financial and sexual abuse scandal involving now-retired Bishop Michael J. Bransfield.

Last November, one of his parish visits in the archdiocese was at Nativity of Mary Church in Bloomington, Minnesota, Father Griffith introduced the concept of restorative justice in a homily at all Masses and held a healing circle.

He told the congregation at the 10:30 a.m. Mass that a twin crisis — clergy abuse and, in too many places, systematic cover-up — created in the church an “inversion of the moral order,” as the church put its reputation ahead of the needs of victims/survivors.

That caused lasting harm to victims-survivors, anger among the laity and a loss of morale among good priests doing good work, he said.

It has led some people to leave the church, and others to think about leaving, Father Griffith said. He encouraged those in the congregation to “stay and fight. This is your church,” he said. “Fight against the closed, clerical culture that sometimes prevails.”

As he invited people to the healing circle following the Mass, he told them the Archdiocese of St. Paul and Minneapolis wants to help people find healing.

About 40 people stayed. After introducing the process, Father Griffith encouraged those attending to form small groups, and they talked to one another, each holding a small stone to take their turn to speak, knowing what they shared would remain confidential.

NEXT: In hopes of healing, abuse survivor shares his story