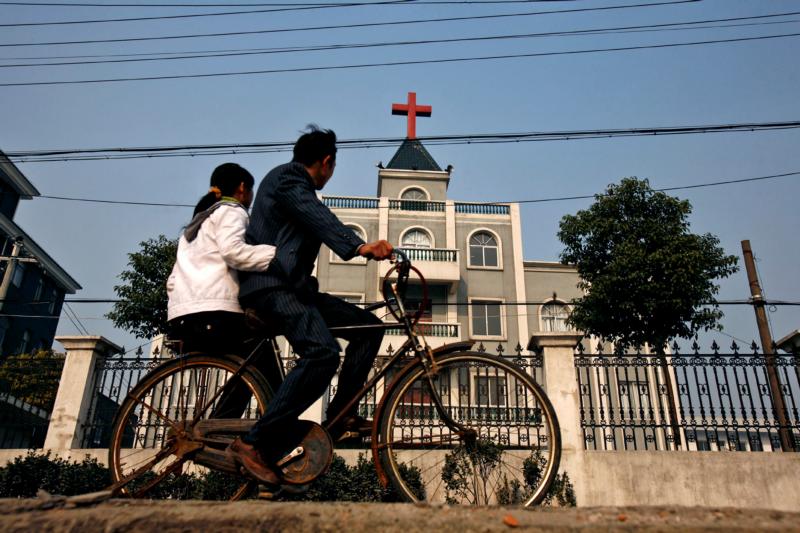 In this 2006 file photo, people in Hangzhou, China, ride a bicycle past a church in the country's eastern province of Zhejiang. More than 1,200 crosses were removed and an unknown number of churches torn down in the region between 2013 and 2017. (CNS photo/Lang Lang, Reuters)

HONG KONG (CNS) — The architect of the three-year cross removal and church destruction campaign in the Chinese province of Zhejiang has been appointed to head the Office of Hong Kong and Macau Affairs, in what many see as a signal that Beijing intends to take a hardline approach in the financial hub that has been roiled by more than six months of street protests.

Xia Baolong, 67, a close ally of Chinese leader Xi Jinping, was his deputy in Zhejiang when Xi ran the province. Later, in 2013, Xia became the Communist Party secretary of the province, one of China’s more heavily Christian regions.

Xia began the campaign to tear down crosses and some churches, using China’s dense property codes as a shield, from 2013 until he stepped down in 2017. More than 1,200 crosses were removed and an unknown number of churches torn down, a tactic that later spread to other provinces.

He was further promoted for his efforts and has been serving since 2017 as a vice chairman of the Chinese People’s Consultative Committee, which has traditionally included religion — as well as ethnic minorities — as part of the sections of society it oversees.

NEXT: Pope shares with U.S. bishops his frustration with reaction to Amazon text