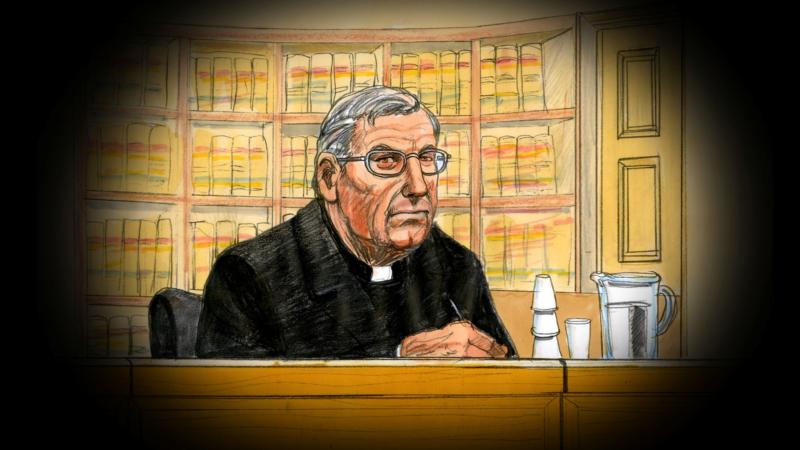 Australian Cardinal George Pell is depicted in this courtroom sketch during his June 5, 2019, appearance at the Supreme Court of Victoria in Melbourne. (CNS illustration/Jeff Hayes, handout via Reuters)

As the only living witness to the crime, the victim’s testimony sits at the center of Cardinal Pell’s conviction. The other victim, one of two 13-year-old choirboys he is convicted of assaulting in 1996 while archbishop of Melbourne, is deceased. The victims’ identities remain secret due to their age at the time of the offenses.

The video was shown to the 12-person jury that found Cardinal Pell guilty of five counts of sexual assault and one count of oral rape in the Australian state of Victoria’s County Court in December 2018. Cardinal Pell, at the time senior Vatican official, opted not to give evidence.

The majority decision of the Appeals Court included commentary that the judges were convinced by the demeanor of the victim as part of evidence they weighed, agreeing that a jury could have found Cardinal Pell guilty beyond reasonable doubt, the required legal test. The dissenting judge, Marcus Weinberg, was unconvinced that a jury could have reached such a verdict and recommended it be overturned and the cardinal set free.

Cardinal Pell’s defense submission largely relies on the written opinion of the dissenting judge: that a range of factors, including the victim’s testimony and demeanor, should have not been enough to persuade a jury to convict the cardinal.

On March 11, the High Court’s full bench will first decide, based on written submissions and oral pleadings, whether to grant Cardinal Pell’s special leave to appeal to the court. If leave is not granted, the cardinal will return to prison and serve out his term — at least 32 more months.

If leave is granted, the justices would immediately proceed to hear the appeal. This likely would include questioning lawyers from both sides, and an extra day has been set aside for this eventuality. The court would then return after some months, with a decision to either uphold Cardinal Pell’s conviction or set him free.

Any Vatican decision or canon law inquiries would begin once the High Court has made its decision.

Cardinal Pell is the most senior Catholic to be convicted of child sexual abuse. Due to technical legal sensitivities, the jury verdict was sealed until his March 2018 sentencing, when he was given a prison sentence of six years with a no-parole period of three years and eight months.

PREVIOUS: Mediterranean must be crossroad of peace, dialogue, pope says