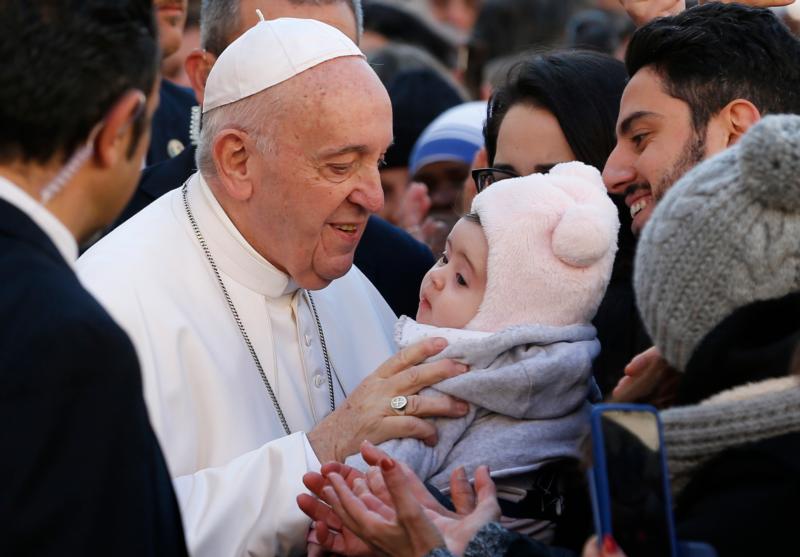 Pope Francis greets a baby after attending the meeting, "Mediterranean, Frontier of Peace, at the Basilica of St. Nicholas in Bari, Italy, Feb. 23, 2020. (CNS photo/Paul Haring)

VATICAN CITY (CNS) — The Catholic communities of every nation on the Mediterranean Sea must work together to promote peace, to aid migrants and refugees and to defend religious freedom, Pope Francis told bishops from 19 Mediterranean countries.

“Amid deep fault lines and economic, religious, confessional and political conflicts, we are called to offer our witness to unity and peace,” the pope said Feb. 23 as he joined 60 bishops from Europe, the Middle East and North Africa at the end of a five-day meeting in the southern Italian coastal city of Bari.

Archbishop Pierbattista Pizzaballa, apostolic administrator of the Latin Patriarchate of Jerusalem, spoke before Pope Francis, noting how for centuries the Mediterranean has been the crossroads of “cultural, commercial and religious exchanges of every kind, but it also has been a theater of wars, conflicts, political and even religious division.”

“At the present time, rather than diminishing, these seem to be increasing,” the archbishop said. “The destiny of entire populations has been subjugated to the interests of a few,” he continued.

Pope Francis, in his speech to the bishops, condemned the “growing attitude of indifference and even rejection” of the poor and migrants by “those who, caught up in their own wealth and freedom, are blind to others.”

“Fear is leading to a sense that we need to defend ourselves against what is depicted in demagogic terms as an invasion” of migrants and refugees, the pope continued.

Departing from his prepared text, he said he was frightened by the content and tone of speeches by some political leaders who “sow fear and then hatred” in a way similar to what the Nazis did in the 1930s.

“The rhetoric of the clash of civilizations merely serves to justify violence and to nurture hatred,” he said. And rather than building institutions that promote equal opportunity and educate everyone to work for the common good, “the international community has been content with military interventions.”

Dialogue and understanding are essential to life in a globalized world, he said. “All too often, history has known conflicts and struggles based on the distorted notion that we are defending God by opposing anyone who does not share our set of beliefs.”

“Extremism and fundamentalism deny the dignity of the human person and his or her religious freedom, and thus lead to moral decline,” the pope said, urging the bishops to “speak out to demand that government leaders protect minorities and religious freedom. The persecution experienced above all — but not only –by Christian communities is a heart-rending fact that cannot leave us indifferent.”

Working for the common good of all God’s children is part of preaching the Gospel, the pope said, which is why Catholics must “act tirelessly as peacemakers.”

“The Mediterranean region is currently threatened by outbreaks of instability and conflict, both in the Middle East and different countries of North Africa, as well as between various ethnic, religious or confessional groups,” he said.

And regarding “the still unresolved conflict between Israelis and Palestinians,” Pope Francis warned of “the danger of inequitable solutions,” which many read as a reference to a plan announced in late January by U.S. President Donald Trump and Israeli Prime Minister Benjamin Netanyahu. Under the plan, Israel would annex part of the West Bank and the Palestinians would be given limited sovereignty.

Pope Francis also spoke of the “serious sin of hypocrisy” seen when “so many countries talk about peace but then sell weapons to countries that are at war. This is called the great hypocrisy.”

“War, by allocating resources to the acquisition of weapons and military power, diverts those resources from vital social needs, such as the support of families, health care and education,” he said.

In other words, the pope said, war “is genuine madness; it is madness to destroy houses, bridges, factories and hospitals, to kill people and annihilate resources, instead of building human and economic relationships. It is a kind of folly to which we cannot resign ourselves: war can never be considered normal or accepted as an inevitable means of settling differences and conflicts of interest.”

Many of the victims of those wars or conflicts, those fleeing religious persecution and those seeking a safe and dignified life for their families attempt to cross the Mediterranean Sea to Europe.

“The number of these brothers and sisters — forced to abandon their loved ones and their lands, and to face conditions of extreme insecurity — has risen as a result of spreading conflicts and increasingly dramatic environmental and climatic conditions,” the pope noted.

“We can never resign ourselves to the fact that someone who seeks hope by way of the sea can die without receiving help,” Pope Francis said.