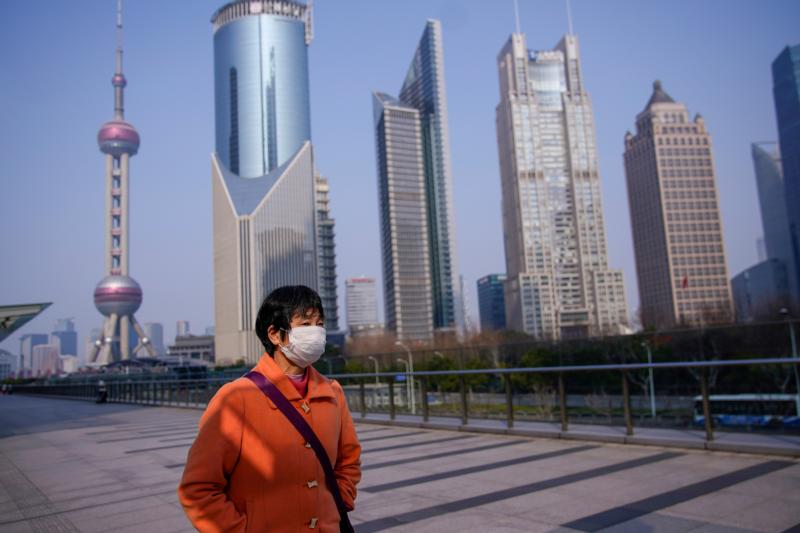 A woman wearing a mask is seen at Lujiazui financial district in Shanghai Feb. 3, 2020, as the country is hit by an outbreak of a new coronavirus. As deaths continue to rise from the epidemic, China faces a severe shortage of medical supplies, according to the only Catholic charity in the communist nation. (CNS photo/Aly Song, Reuters)

HONG KONG (CNS) — As deaths continue to rise from the coronavirus epidemic, China faces a severe shortage of medical supplies, according to the only Catholic charity in the communist nation.

“There is a serious shortage of some medical supplies. As the flu has spread all over the country, hundreds of pieces of masks and protective clothing are consumed daily. Medical supplies are not just lacking but dangerously lacking,” said a message from Jinde.

The Catholic Church’s official social services agency, Caritas International, has no local partner in China like most other countries in Asia have. Started in 1997 and officially recognized in 2006, Jinde (advancing love) does the work of Caritas, carrying out the relief work of the church in China.

Ucanews.com reported the charity’s Feb. 2 message in Chinese, titled “Urgent appeal from China,” said it was seeking help from the universal church.

“So many people are desperately looking for supplies abroad. Our Catholic Church is a church preaching love,” said the message signed by Father Zhang Shijiang, Jinde official.

“Can I order some medical items such as protective clothing and masks for front-line health care workers through the universal church?”

The message said the “urgent need for emergency treatment” has led many medical workers on the front line exposed to a “very dangerous environment.”

Ucanews.com said the virus has claimed the lives of 490 people in mainland China and two elsewhere since the first case was reported in Wuhan city in December. More than 24,500 people are now infected and face the threat of developing choking pneumonia as the contagion continues to spread.

In addition to Wuhan, the outbreaks in other areas are “also very serious. The number of confirmed and suspected cases of pneumonia is still on the rise, and the rescue of critically ill patients remains severe,” the message said.

Critically ill patients affected with the virus, which has no known medical cure, need nursing care and assistance. However, people assisting them need to protect themselves, as the virus spreads through bodily fluids.

Although China has stepped up its efforts to contain the spread of the virus with the production of protective equipment, efforts could not meet soaring demand, the message said.

“The helplessness and toil that I have experienced in the past few days have made me deeply experience how limited people are. This test also awakens us to pay more attention, care and help to those who face war in the future,” he said.