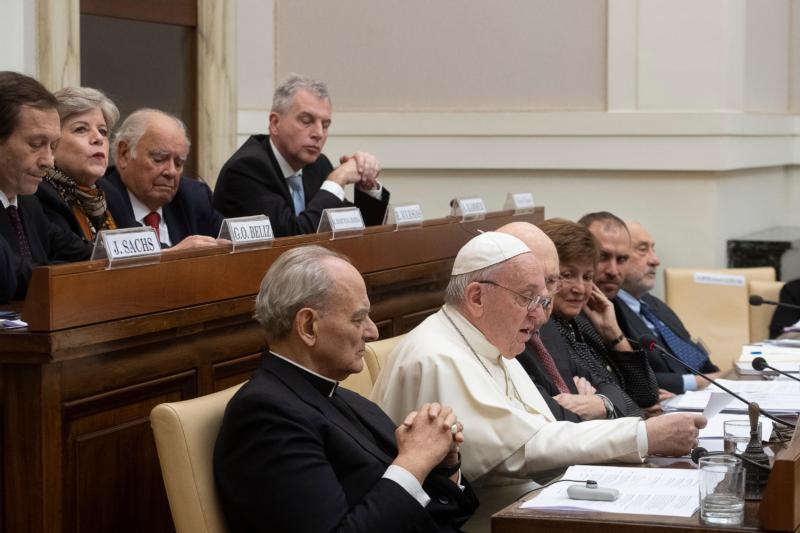 VATICAN CITY (CNS) — The same day Pope Francis dedicated his general audience talk to explaining “Blessed are the poor in spirit,” high-level finance ministers and economic experts were meeting nearby to come up with concrete solutions to overcome chronic global inequalities, instability and injustice.

People do not like to accept the truth of that beatitude, the pope told visitors in the Paul VI audience hall Feb. 5, because it keeps them from achieving fame and fortune, but it also always leaves them “radically incomplete and vulnerable.”

That same sense that there is something radically inadequate and vulnerable about today’s economic policies and financial systems was what drew dozens of experts and finance ministers to the Pontifical Academy of Social Sciences for a full day of talks and appeals.

The leading “global decision-makers” all agree on the root causes of unsustainable inequality and are adamant about wanting to prevent yet another global financial crisis, said Eric LeCompte, executive director of Jubilee USA Network and an observer invited to the Vatican gathering.

He told Catholic News Service the problem comes in finding consensus on the solutions, “the ways forward for countries to get out of debt crisis and financial crisis and also for building an economy that’s more inclusive and where there is less of a distinction between the haves and the have-nots.”

The first step toward coming up with “New Forms of Solidarity: Toward Fraternal Inclusion, Integration and Innovation,” as the meeting was titled, was getting such major players together in the first place.

Kristalina Georgieva, managing director of the International Monetary Fund and a leading voice warning that the global economy runs the risk of a major depression, told reporters that the Vatican venue was ideal for such talks.

“First, because we have a pope that is very caring and well-respected by people of all religions and who has demonstrated in his own life that high standing and modesty can go hand-in-hand,” she said.

Second, she added, “the academy is a place open to different views, not a narrow-mindedness that could constrain good dialogue.”

Meeting participants agreed it was no longer acceptable science to consider any market philosophy or policy as being “natural,” invisible or inevitable, but that economics is all about people picking and choosing specific rules and frameworks.

The ongoing concentration of wealth in the hands of a few and increasing economic disparity is not “just a matter of the laws of nature or the laws of economics, but in large measure, it’s the result of our man-made policies and laws,” he said in his keynote address.

Current and looming crises are making it clear “we have been making the wrong choices,” and it is time for a new path, “an alternative economic system and alternative globalization” that puts people and values first, he said.

Pope Francis understands that what is at stake is not just a matter of calling for more ethical behavior by leaders in the system, but an actual reform of the system and how it works.

His biographers have noted how his long experience ministering in the slums of Buenos Aires, Argentina, gave him unique insight into how a nation rich in promise could be so crippled by financial crisis and corruption.

LeCompte said, “Pope Francis really led his country as they were battling a type of predatory finance known as vulture funds,” so while he is continuing the same social teaching as his papal predecessors, “we see the Holy See talking more about very technical economic policies like derivatives and taxation and illicit financial flows.”

“There’s a real sense from this Holy Father that if we really want to change the structures that govern our economy, we need to be able to address these technical issues head-on,” he said.

The pope, in fact, made a point to stop by the pontifical academy in the early afternoon. And his lengthy and detailed written speech continued to hammer home basic and reasonable ethical principles: an end to money laundering, the arms industry and tax havens that drain billions from national economies; stopping repeated tax cuts for the wealthy; and relieving crushing, unsustainable debt burdens, to name a few.

LeCompte said many of the solutions put forward “are ones that Jubilee has advocated for over 20 years, and we’ve worked very closely with the Holy See on developing those positions, as well as with all other major religious institutions around the world.”

Just as the pope’s encyclical, “Laudato Si’,” sets a clear way to examine current structures and advocates for the values of global solidarity and environmental and economic justice, the Feb. 5 gathering was a continuation of that call for a more just world.

“We actually have a very clear path that needs to be taken,” LeCompte said, which begins with God’s creation of a rich and abundant world.

And, he said, the path leads toward that “jubilee promise that Pope John Paul II was the first to exclaim — that we all deserve to live in an economy where we all have enough.”