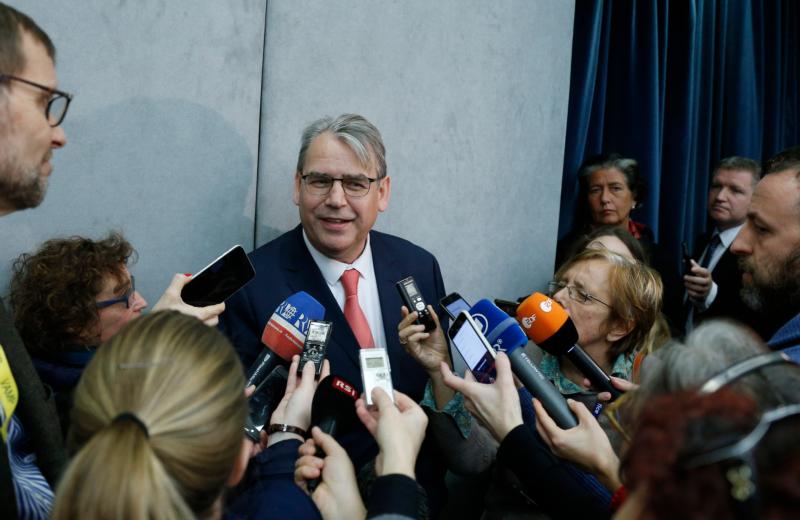 Johan Ickx, director of the historical archive of the Section for Relations with States of the Vatican Secretariat of State, speaks to reporters at the Vatican press hall Feb. 20, 2020, to discuss the opening of materials on Pope Pius XII in the Vatican Apostolic Archives. On March 2 the Vatican plans to open its archives on the World War II pontificate. (CNS photo/Paul Haring)

VATICAN CITY (CNS) — When the Vatican’s wartime archives open to researchers March 2, it will be just the start of what should be a long, slow process of studying, analyzing and publishing findings, said the Vatican’s archivist and librarian.

“We have to have the patience to wait and listen to the results” dozens of scholars are expected to produce over the coming years from what is known to be “inevitably slow and complex” work, Cardinal Jose Tolentino Calaca de Mendonca told reporters Feb. 20.

Only by expecting and letting scholars take the time to do their job thoroughly can the examination and discussion of this controversial wartime period have “certain” and document-based evidence, he said.

The true task of a historian, he said, is to understand and submit to the truth, untangling the reasons behind historical events.

“The church is not afraid of history and faces the assessment of historians and researchers with trusting certainty” that the meaning and spirit of what was done will be understood, Cardinal de Mendonca said.

The cardinal was one of a number of Vatican archivists who spoke with reporters at the Vatican press hall about the upcoming opening of the archives related to the wartime pontificate of Pope Pius XII.

A vast amount of materials from the period of 1939 to 1958 will be available for consultation and study by qualified scholars or academics. The materials come from not just the Vatican Apostolic Archives, but also multiple other archives, such as from the Vatican Secretariat of State, which include documents regarding internal church governance and the Holy See’s relations with states, nongovernmental organizations and the international community.

Johan Ickx, director of the archive of the section for relations with states, told reporters staffers have digitized almost their entire archive, starting with 1939 and reaching just shy of 1958, since they only “started doing it nine years ago.”

“We are now past 1.3 million documents” already scanned and available online for study or to request printed copies, he said.

To offer an example of what one could find, he said, “There are documents of ambassadors coming to the Holy See,” meeting with Vatican officials and staff, expressing their opinions, concerns and plans, and documents or correspondence related to other diplomatic contacts and activity.

There also will “certainly be documents” related to a hypothetical or “presumed” plan by the Nazi regime to kidnap Pope Pius, he added in response to a question.

Ickx said, “I think the researchers that come will be astonished when they see” all that is in their archive.

Much is already known from the extensive research carried out in other archives around the world, but the opening at the Vatican “will still change something, that is, for understanding the truth better. I am certain of this,” he said.

Other archives making their documentation available from the time period include the congregations for the Doctrine of the Faith, the Evangelization of Peoples and Eastern Churches, the Apostolic Penitentiary and the Fabbrica di San Pietro, the Vatican office in charge of St. Peter’s Basilica.