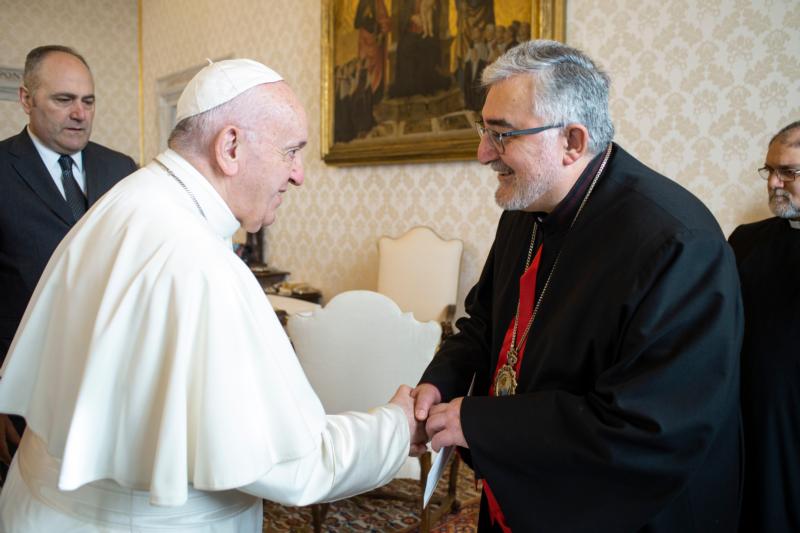 Pope Francis greets Bishop Mikael Mouradian of the Armenian Catholic Eparchy of Our Lady of Nareg in Glendale, Calif., during a meeting with U.S. bishops from the Eastern Catholic Churches in the United States during their "ad limina" visits to the Vatican Feb. 20, 2020. (CNS photo/Vatican Media)

VATICAN CITY (CNS) — Pope Francis “is a father who knows very well his daughters and sons,” including those who belong to the Eastern Catholic churches, said the Armenian Catholic bishop of the United States and Canada.

Bishop Mikael A. Mouradian of the California-based Armenian Catholic Eparchy of Our Lady of Nareg was one of 15 bishops from eight Eastern Catholic churches who spent close to three hours conversing with Pope Francis Feb. 20.

The meeting was part of the bishops’ “ad limina” visits to Rome to report on the status of their eparchies or dioceses. They were the last group of U.S. bishops to complete the visits, which are required regularly of every bishop in the world.

Bishop Mouradian had made an “ad limina” visit in 2012, meeting with Pope Benedict XVI. Both popes “were very fraternal” and very much teachers, but Pope Francis’ advice and counsel came from a place “much more near to the heart,” the bishop said.

The Armenian bishop and others who spoke to Catholic News Service said they thanked Pope Francis for his decision in 2014 to lift an 85-year-old Vatican ban on ordaining married priests for the Eastern Catholic churches outside their traditional homelands where married priests are common.

“I ordained my first married priest two years ago,” the bishop said. “He is our first American-born vocation to the priesthood, and he’s doing an amazing job.”

Bishop Mouradian said the pope’s decision to lift the ban did not open any floodgates because the bishop has conditions candidates must meet: “I always request that they have at least five years of experience in matrimony” and have children; and they must have at least a master’s of divinity degree. In addition, “the wife should agree that the husband will be a priest.”

When he was named bishop in 2011, he said, all the priests of the eparchy were from the Middle East. He was told, “Don’t look for vocations in the States; you will not find them.”

But, he said, the Gospel says to pray that God would send workers for the vineyard. “That’s what I did. I prayed. And worked a little bit for it.”

The bishop is still praying, though, because there are Armenian Catholic communities spread throughout the United States and Canada, and he would like to open more missions to serve them and help them preserve their spiritual traditions.

Bishop John M. Botean of the Romanian Catholic Eparchy of St George, based in Canton, Ohio, was making his fourth “ad limina” visit to Rome. The meeting with Pope Francis, he said, “was unlike anything I have ever experienced in Rome. Really. Seriously.”

“The positive public perception that the pope has is a shadow of the sense of him that you get from a personal encounter,” the bishop said. “He is everything I used to dream about for the leadership of the church.”

“It was wonderful,” said Archbishop Borys Gudziak of the Ukrainian Catholic Archeparchy of Philadelphia. “It’s not every day that you get a chance to have a conversation with somebody who’s a fatherly figure, who has a world perspective, a broad heart and a good sense of humor, and who happens to be the successor of Peter, the pope of Rome.”

The bishops, he said, “received great encouragement” and “gentle prodding” from the pope.

The discussion was wide open and touched “all the neuralgic issues,” Bishop Botean said, including clerical sexual abuse, priestly ministry, ecumenism, evangelization and the situation of Catholics in their home countries, especially the suffering Christians of the Middle East.

Pope Francis also gave the bishops the impression that in the upcoming reform of the Roman Curia, the renamed Dicastery for Eastern Churches would continue to expand its role of serving their churches rather than trying to control them. Bishop Botean said in the past the congregation would be referred to jokingly as “the colonial office.”

One problem the bishops brought to the pope’s attention, he said, is that in some parts of Europe, the local Latin-rite bishops “are not very hospitable” about allowing married Eastern-rite priests to serve migrants of their communities, yet they will give the migrant Orthodox community a church to use.

“Pope Francis knew about that,” Bishop Botean said. “He said, ‘You’re Catholics. We have to treat you as one of our own.”

For decades, Eastern Catholics were encouraged to focus only on members of their own ethnic group and even to discourage Latin-rite Catholics from becoming involved in an Eastern-rite parish.

But when one of the Ukrainian Catholic bishops told the pope that one of his U.S. parishes is Hispanic, the pope reminded the bishops that, like any Catholic, they have an obligation to welcome people, reach out and evangelize, the bishop said.

“He was very positive about that,” Bishop Botean said. “He said people have to go where they feel welcomed and accompanied, and if they are attracted to the liturgy, they should go there.”

While Bishop Mouradian obviously is proud of the liturgy and liturgical heritage of the Armenian church, he said that “faith is not only tradition.”

Latin-rite Catholics who go to one of his liturgies almost always remark that the rites and the “beautiful hymns” of the traditional Armenian liturgy “have much more mystery” than the modern Mass, he said.

But, he said, a Catholic “should believe profoundly in what is going on during the liturgy, especially during the holy Mass, whether in the old tradition or the new tradition. But when you understand very well that that’s the sacrifice of Jesus Christ, the true body and blood of our Lord, that’s the biggest mystery — that’s what comes with faith.”

Being open to “those who do not come from the tribe” is not totally new, Archbishop Gudziak pointed out. Bishop Kurt R. Burnette of the Ruthenian Eparchy of Passaic, New Jersey, was among the bishops in the group. “He’s not Burnettski, he’s Kurt Burnette from Texas.”

Archbishop Gudziak said Pope Francis was “very open” with the bishops, told them a few things he asked them not to share, “was in no way putting up facades, spoke about what might be weaknesses in the church, the Holy See.”

“We were very uplifted. All of us,” he said.

NEXT: ‘We are in human misery,’ Franciscan in northern Syria tells pope