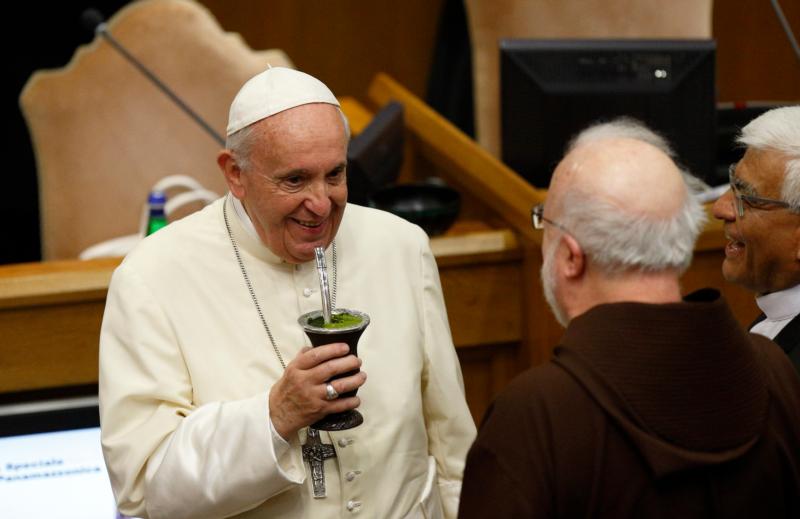 Pope Francis drinks mate, the traditional Argentine herbal tea, before a session of the Synod of Bishops for the Amazon at the Vatican in this Oct. 15, 2019, file photo. The pope has decided that the next general assembly of the Synod of Bishops will meet in the fall of 2022. He has not announced the topic for the synod. (CNS photo/Paul Haring)

VATICAN CITY (CNS) — Pope Francis has decided the next general assembly of the Synod of Bishops will be held in the fall of 2022, but he has not announced the theme for the gathering, the Vatican said.

Meeting with the pope Feb. 6-7, members of the ordinary council of the Synod of Bishops formally presented the pope with three possible themes and discussed the work accomplished by the council after the synod on young people in 2018, the Vatican said Feb. 15.

The Vatican statement did not list the three possible themes, although in his closing speech to the Synod of Bishops for the Amazon in October, Pope Francis had said “synodality” was among the three themes “voted on and that obtained a majority” of support from synod members.

“I do not know whether it will be chosen; I have not decided yet,” the pope had said. “I am reflecting and thinking but I can certainly say that we have journeyed a lot and we must still journey more along this path of synodality.”

While the themes proposed at the February meeting were not disclosed, the Vatican said the ordinary council did feel “the need to urgently express its solidarity with brothers and sisters involved with the tragedy of forced migration.”

In a message released by the Vatican press office Feb. 15, the ordinary council of the Synod of Bishops reflected “on the consequences of the migration phenomenon” caused by economic inequality, unemployment, religious persecution, terrorism and environmental devastation.

“People are disoriented, families destroyed, young people traumatized and those left at home are induced to despair,” the statement said. “Sometimes these people suffer in refugee camps and some even end up in prison. Women and young people are forced into prostitution; they are physically, socially and sexually abused. Children are separated from their parents and deprived of the right to grow up in the security of a united family.”

The ordinary council of the Synod of Bishops expressed support for governments and non-governmental organizations that seek to help migrants and refugees and called for cooperation in the fight against human trafficking.

“We entrust our suffering brothers and sisters to Mary, mother of humanity, who first knew the pain of leaving her home and country together with her family in search of security and peace,” the council said.