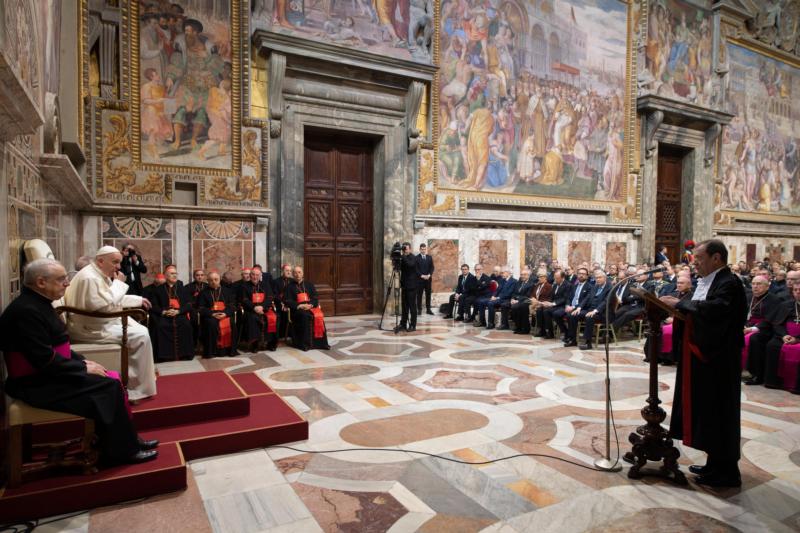 Pope Francis listens as Gian Piero Milano, promoter of justice at the Vatican City state court, speaks during the opening of the 91st judicial year of the court during an audience in the Apostolic Palace at the Vatican Feb. 15, 2020. (CNS photo/Vatican Media)

VATICAN CITY (CNS) — The decade-long process of updating the laws of Vatican City State is part of the Vatican’s support for international commitments to protect people and safeguard vulnerable groups, who are “frequently the victims of new, odious forms of illegality,” Pope Francis said.

Meeting officials of the Vatican City State court Feb. 15, Pope Francis repeated his conviction that the latest financial scandal being investigated by the Vatican City police and tribunal is a sign of progress because the report of suspicious activity originated with the Vatican general auditor.

While the investigation continues into the financing of a London real estate investment and while the parties involved have the right to a presumption of innocence, the pope said the flagging of the irregular activity “shows the efficacy and efficiency of the counter-actions as requested by international standards.”

The new Vatican City legislation, the police who enforce the laws and the judges who try those accused of breaking the laws, the pope said, are meant to ensure not only a well-ordered life within Vatican City, but to promote a sense of responsibility for “the quality of interpersonal relationships lived within our territory.”

The path of justice, he said, makes possible “an authentic brotherhood in which all are protected, especially the weakest and most fragile.”

However, the pope said, laws alone will never protect people. Each member of the community must make a commitment to following the laws, but also to personal conversion. “It is only this justice that generates justice,” he said.

And, in applying the law, Pope Francis asked the Vatican City judges to recognize their rulings are not simply about a technical application of the law, but about “a disposition of the heart.”

“Justice alone is not enough, it must be accompanied by other virtues as well,” especially prudence, strength and temperance, he said.

Prudence “gives us the ability to distinguish the true from the false,” he said. Temperance provides “moderation and balance in evaluating the facts,” and strength allows one to resist “pressure and passions.”

“Please,” he told the judges, “do not forget that in your daily work you often have before you people who hunger and thirst for justice, suffering people,” who experience anguish and desperation.

But above all, the pope continued, the judges must remember that “mercy is not the suspension of justice, but its fulfillment because it takes everything to a higher order where even those condemned to the harshest punishment find the redemption of hope.”