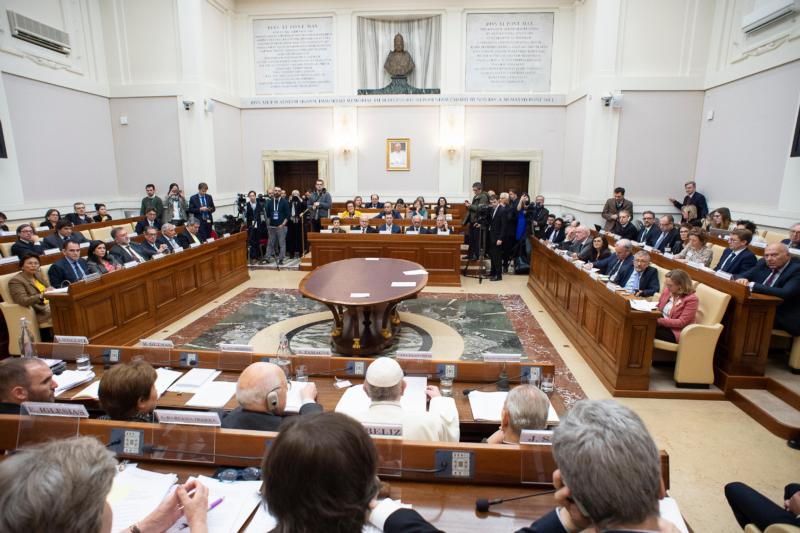 VATICAN CITY (CNS) — The world needs the concerted effort of everyone to end tax havens and money laundering and to promote the common good over the narrow interests of powerful companies, Pope Francis told leaders of major financial institutions and economic experts.

“Let’s work together to end these injustices” in the current economic system, he said Feb. 5 during a high-level gathering at the Pontifical Academy of Social Sciences.

The war industry, too, must come to an end, he added, since it takes billions of dollars a year away from ending poverty and illiteracy and directs it instead toward creating “division and death.”

The pope’s remarks came during a daylong meeting focused on how financial and economic institutions and policies can create “new forms of solidarity” that would promote “inclusion, integration and innovation.”

The meeting brought high-level representatives from the World Bank and the International Monetary Fund, as well as economic experts and government ministers of finance.

The world is rich with resources, the pope said, and yet poverty, exploitation and inequality are still on the rise. Five million children under the age of 5 will die this year alone because of poverty and another 260 million will go without education because of war, lack of resources and migration, he said.

The richest 50 people in the world hold assets equivalent to $2.2 billion, which could finance the medical care and education of every poor child in the world and save the lives of millions each year.

He told the leaders he was giving them a message of hope because the current state of affairs was not a sad inevitability and “we are not doomed to universal inequality.”

People can and must act in new ways with “creative responses to the avoidable suffering of so many innocent people.”

“A rich world and a vibrant economy can and must end poverty,” he said, but that requires policies and processes that “feed, heal and clothe the least of society rather than exclude them.”

Will people begin to put all people and their common good at the center of attention or will people continue to promote and make excuses for systems that feed injustice and social violence? he asked.

The problem is more than just indifference and inaction, the pope said, there also exist what St. John Paul II called “structures of sin” that thrive in conditions where the common good is set aside and the “idolatry of money, greed and speculation” rule.

“The structures of sin today include repeated tax cuts for the wealthiest people, often justified in the name of investment and development; tax havens for private and corporate profits; and the possibility of corruption by some of the world’s largest corporations, not infrequently in line with the political establishment,” he said.

“Every year hundreds of billions of dollars, which should be paid in taxes to finance health care and education, accumulate in tax haven accounts, thus preventing the possibility of dignified and sustained development” for everyone, he said.

Meanwhile, “impoverished people in heavily indebted countries are facing overwhelming tax burdens and cuts in social services as their governments pay off insensitive and unsustainable debts,” he added.

But the “greatest structure of sin” of all is “the war industry itself,” he said, which is why nations finally must turn their swords into plowshares.

The pope urged the leaders and experts gathered at the Vatican to work together with others to end injustice in tax rules, lending and credit institutions and fiscal and economic policies.

Recognizing their role in advising world governments and budgets, he asked that they remind leaders of their responsibility to provide developmental assistance to poor nations and debt relief to heavily indebted nations as well as live up to promises made to stop climate change, “so we do not destroy the foundations of our common home.”

“A new ethic” is necessary, one which sees everyone working together worldwide “to close tax havens, prevent tax evasion and (end) money laundering that robs society, as well as to tell nations the importance of defending justice and the common good over the interests of the most powerful companies and multinationals, which end up suffocating and hindering local production,” the pope said.

Today’s “insular and antagonistic logic” is not the only way to solve problems, he said; there are ways that are built on a culture of encounter, “where the solid foundations of a new international financial architecture are renewed.”

NEXT: Deportees from U.S. killed after return to El Salvador, observers say