After court action, ‘Remain in Mexico’ policy remains in force 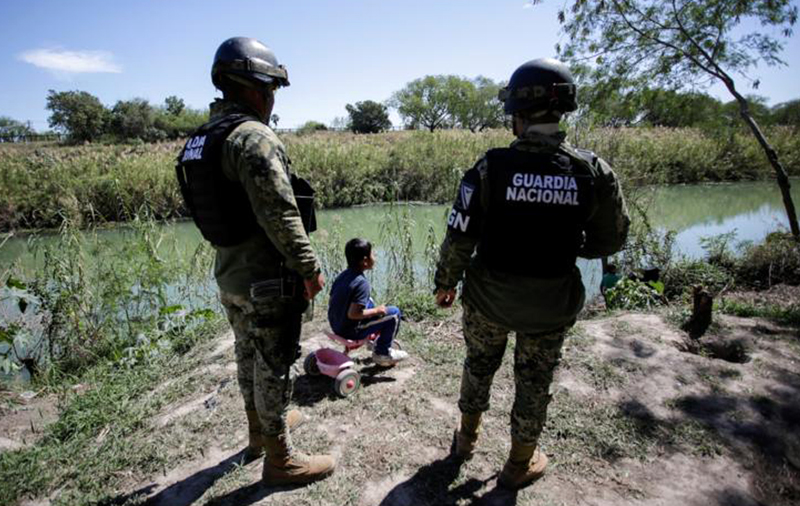 A migrant boy, who is an asylum-seeker sent back to Mexico from the U.S. under the Trump administration's "Remain in Mexico" policy, is seen near two members of the Mexican National Guard at a provisional campsite near the Rio Bravo in Matamoros, Mexico, Feb. 27, 2020. The policy is officially named Migrant Protection Protocols, or MPP. (CNS photo/Daniel Becerril, Reuters)

SAN FRANCISCO (CNS) — After the 9th U.S. Circuit Court of Appeals temporarily blocked the Trump administration’s “Remain in Mexico” policy Feb. 28, the court later the same day put a stay on its own ruling.

The administration’s 2019 Migrant Protection Protocols, as the policy is formally known, require asylum-seekers to stay in Mexico while their cases make their way through U.S. immigration courts.

In a 2-1 vote Feb. 28, a panel of the 9th Circuit blocked the policy, saying evidence had shown that Central American migrants are put in danger while awaiting word on their asylum cases. With the policy, about 60,000 asylum-seekers have been sent back to Mexico.

The Feb. 28 ruling only applies to California and Arizona, the border states in the court’s jurisdiction. The court’s stay on its ruling allows the policy to remain in place while the Trump administration appeals the case to the U.S. Supreme Court.

The “Remain in Mexico” policy was first implemented at the border crossing in San Diego and it initially was limited to asylum-seekers from Guatemala, Honduras and El Salvador. The policy was expanded to crossings in Calexico, California, and four Texas cities: El Paso, Eagle Pass, Laredo and Brownsville. It also was expanded to include more people from Spanish-speaking countries such as Brazil.

In the ruling that temporarily blocked the Migrant Protection Protocols, or MPP, the two 9th Circuit judges forming the majority said the policy it “has had serious adverse consequences for the individual plaintiffs.”

“Plaintiffs presented evidence in the District Court that they, as well as others returned to Mexico under the MPP, face targeted discrimination, physical violence, sexual assault, overwhelmed and corrupt law enforcement, lack of food and shelter, and practical obstacles to participation in court proceedings in the United States,” they said.

The Catholic Legal Immigration Network in a Feb. 28 statement said the administration’s policy “fly in the face of asylum law and American humanitarian values.”

In response to the “Remain in Mexico” policy, CLINIC established the Estamos Unidos Asylum Project in Ciudad Juarez, Mexico, to advise asylum-seekers about asylum and related humanitarian relief in the United States.

Tania Guerrero, the project’s attorney, said the policy has been “a humanitarian nightmare.”

El Paso Bishop Mark J. Seitz said in a Jan. 31 statement: “A year of ‘Remain in Mexico’ has damaged enough human lives, hurt enough families and chipped away far too much at our country’s commitment to life, dignity and the protections that should be afforded to asylum-seekers and refugees.”

He also said the policy “unnecessarily” places Border Patrol agents and Customs and Border Protection officers in a “lamentable position.” These law enforcement officials who “are in the pews of our churches” have to choose “between following the laws of conscience or the morally bankrupt dictates of man when they encounter human beings in need, who represent for us Christ, hidden beneath the guise of misery, fear and desperation.”

A report about the policy by the nonprofit group Hope Border Institute in El Paso said it “represents a new level of assault on migrants, our binational communities and our country’s commitment to asylum. But it is also a piece (of) the long legacy of racism at the border and a national history of immigrant scapegoating. Both of these require a deep reckoning.”