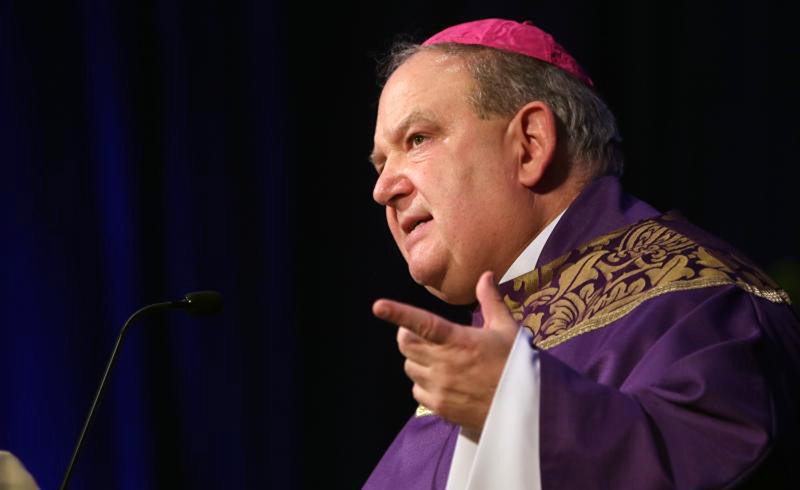 Archbishop Bernard A. Hebda of St. Paul and Minneapolis is pictured in a Nov. 12, 2019, photo. Citing concerns from the Minnesota Catholic Conference about privacy and partisanship in casting primary votes, Archbishop Hebda suggested in a Feb. 25, 2020, letter to his priests they abstain from voting in Minnesota's upcoming primary on Super Tuesday, March 3. (CNS photo/Bob Roller)

ST. PAUL, Minn. (CNS) — Archbishop Bernard A. Hebda of St. Paul and Minneapolis shared some advice from the Minnesota Catholic Conference with priests and deacons in the archdiocese: It might be best not to vote in the March 3 presidential primary.

Given the pastoral need for a priest to be able to minister to all segments of his flock, the universal law of the Catholic Church requires that priests not “have an active part in political parties.”

Concerns with the Minnesota presidential primary stem from the fact that a priest, in making a ballot choice for a particular party, is attesting that he generally agrees with that given party’s principles. And the fact that he has participated in the process — though not the identity of the candidates for whom he votes — would be given to major party leaders, without restrictions on how they might use that information.

Only the Democratic-Farmer-Labor Party and the Republican Party were appearing on the state’s ballot on “Super Tuesday”; Minnesota is one of 14 states that were holding their primary the same day.

But ballot choices made by Minnesota voters also will be made available to leaders of the Grassroots-Legalize Cannabis Party and the Legal Marijuana Now Party.

“The possibility that the data may become public should discourage clergy from participating,” states the Minnesota Catholic Conference’s guidance. “If the law were different and protected privacy, maybe the calculus would change. But it is the opinion of the MCC that discouraging primary voting during this cycle (though not in the general election) is the prudent thing to do.”

The counsel that was shared with priests is not related to the church’s tax-exempt status in the choice of a ballot, because priests can endorse candidates in their individual capacities, the conference said.

Jason Adkins, the Catholic conference’s director and general counsel, said in a separate statement that priests, generally, are discouraged from participating in partisan political activities.

Conference staff, who act as the public policy arm of the state’s Catholic bishops, advised the bishops that because information about a priest’s participation and ballot selection could be made public, it would be imprudent for them to participate in this year’s presidential primary, Adkins said.

Archbishop Hebda opted to pass that information and advice on to clergy in the Archdiocese of St. Paul and Minneapolis.

He also has noted that other organizations have advised employees or their members to consider not voting in the primary if they are worried about their choice of ballot being made public.

Canonically, permanent deacons are not under the same strictures as priests. But the state Catholic conference’s counsel regarding the presidential primary was shared with deacons to consider on a practical pastoral level, the archbishop said.

Subsequent to the communication with the clergy of the archdiocese, the Minnesota House voted Feb. 26 to restrict how party officials could use voter data obtained in the primary. It was unclear if the Senate would take action.

“We have communicated with public officials that we would welcome bipartisan solutions that enhance voter privacy and that protect the integrity of the closed primary process,” Adkins said. “We think it is unlikely that a fix will be passed that will apply to the 2020 primary.”

PREVIOUS: Knights of Columbus releases videos to help men grow in their faith

NEXT: After court action, ‘Remain in Mexico’ policy remains in force