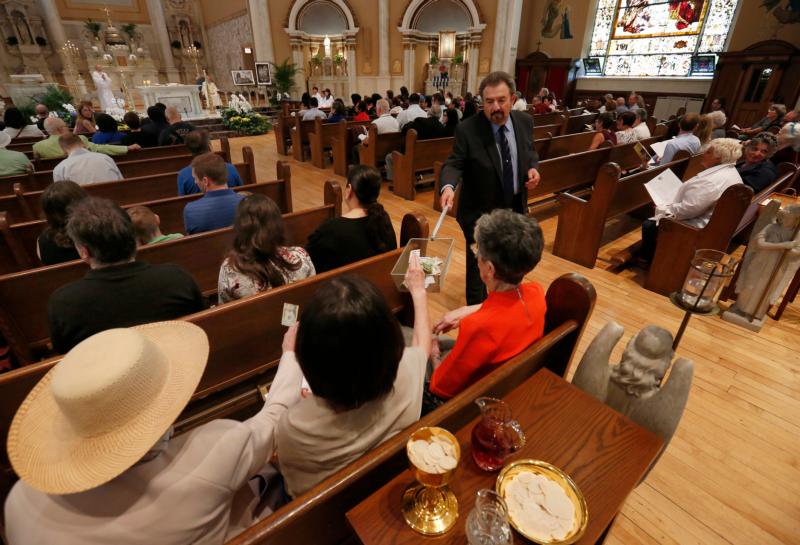 An usher at Notre Dame de Chicago Church in Chicago collects funds June 2, 2019. The Archdiocese of Chicago launched a site to collect donations to help parishes and those in need during the coronavirus shutdown, which has forced the cancellation of all public Masses for foreseeable future. (CNS photo/Karen Callaway, Chicago Catholic)

CHICAGO (CNS) — The COVID-19 pandemic has caused financial disruptions not only to households and businesses, but also to local parishes, who have suspended public Masses at which they can take up offertory collections.

To help Catholics support their local parishes, the Archdiocese of Chicago has created a website that donors can use to make a one-time or recurring gift to any parish they choose.

The site, along with a donation site for the archdiocese’s Coronavirus Emergency Fund, can be accessed at www.archchicago.org/support. Both funds accept credit card payments or electronic payments directly from a bank account.

“About 70% of our parishes have an online giving program,” said Brendan Keating, chief development officer in the Office of Stewardship and Development. “Of course, that means 30% don’t.”

All parishes still have bills to pay even if they are not holding public Masses, Keating said.

“With the suspension of Masses, it’s critically important that parishioners support their parishes with online giving. The parishes absolutely need this income more than they ever have.”

The new site was announced March 20, and promoted during the archdiocese’s Sunday Mass broadcast that was celebrated the weekend of March 21-22 at Holy Name Cathedral and available for remote viewing on the archdiocese’s YouTube channel. It also was televised on ABC-TV Channel 7.

Daily Masses from St. James Chapel in the Archbishop Quigley Pastoral Center also are available starting at 10 a.m. each day on YouTube.

“The website is also really helpful for that, because we can send people to one site,” Keating said. “They don’t have to look up their parish’s own online giving site.”

However, once the crisis is over, parishes will likely encourage more of their parishioners to sign up for online giving, which gives parishes a predictable, steady stream of donations, even if parishioners don’t make it to Mass, whether because of a crisis, like the COVID-19 pandemic, or because they are on vacation.

St. Josaphat Parish has developed a culture of online giving through both Give Central and Text to Give over the past several years, said Father Francis Bitterman, St. Josaphat’s pastor.

Part of the reason is that the parish is very young, with more young adults and families with school-age children than senior citizens, Father Bitterman told the Chicago Catholic, the newspaper of the Chicago Archdiocese.

“Giving online is very natural for this age group since that is how they operate for paying their own bills and doing businesses,” he said.

The parish also makes an effort to promote online giving at least twice a year.

“We push it (online giving) each October during the ‘season of stewardship’ and again in the spring before people start traveling over the summer,” Father Bitterman said. “And we have been able to grow the number of people giving online each time. We stress that online giving helps us to budget properly for the year as opposed to depending upon the in-pew collection basket. A lot of families here have summer homes or travel a lot so they get the need to budget accordingly, especially when our Mass attendance drops significantly during the summer months.”

Text to Give is a newer option, he said, which provides convenience for people who don’t have a standing online donation.

“It’s mainly for the convenience of people in the pews because, as I am sure you know, a lot of people don’t carry much cash these days,” he said.

Even though the lack of in-person donations has not hit St. Josaphat as hard as most other parishes, Father Bitterman is using the parish e-bulletin to remind people to support the parish, he said.

The Coronavirus Emergency Fund was created the same day as the parish offertory site, Keating said. Money donated to that fund will go to people or parishes who have been significantly affected by the pandemic, whether that means Catholic school families who cannot afford tuition after a parent loses a job or parishes that can’t pay their expenses with no Masses scheduled.

Parishes were to receive funds within a couple of weeks of donations being made, Keating said. They also are set to receive lists of donors.

PREVIOUS: Anniversary of ‘Gospel of Life’ marked by commitment to moms

NEXT: Coronavirus claims the Pittsburgh Catholic as diocese ends publication