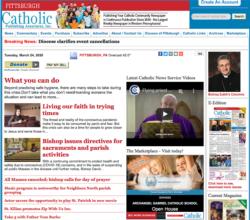 This is a screen grab of the Pittsburgh Catholic diocesan newspaper. Diocese of Pittsburgh officials told staff members in a conference call March 19 they decided to immediately suspend publication of the paper in large part because of the effects of the coronavirus pandemic. (CNS)

CLEVELAND (CNS) — The new coronavirus has claimed the Pittsburgh Catholic newspaper as a victim.

Diocese of Pittsburgh officials informed the newspaper’s 11 staff members in a conference call March 19 that they had decided to immediately suspend publication in large part because of the effects of COVID-19, the disease caused by the virus.

Ellen Mady, diocesan chancellor, told Catholic News Service March 24 that church officials felt that the suspension became necessary because the newspaper could not be distributed through parishes while public liturgies were on temporary hiatus in response to the illness that is sweeping the country.

“It’s (the paper’s suspension) a direct reaction to the coronavirus concerns, and mostly that the absolute main source of distribution was through parishes at Sunday Masses and the suspension of all Masses announcement,” Mady said.

Bishop David A. Zubik announced March 15 that all weekday and weekend Masses were canceled effective the next day.

The decision to suspend publication shocked the newspaper staff, said Carmella Weismantle, operations manager and director of advertising for the 165-year-old weekly, successor to the original paper that started publishing in 1844.

“We had talked about this and everybody thought we would get laid off and then we would come back. But it wasn’t that. They (diocesan officials) made it clear it wasn’t that,” Weismantle said.

“They said all the positions were terminated, eliminated,” she told CNS March 24.

She said staff members were told that they will be paid through March 31 and also will receive a severance package based on their years of service with the diocese.

The newspaper was published for decades as a separate entity of the diocese, Pittsburgh Catholic Publishing Associates Inc. Bishop Zubik served as the publisher, as is customary with diocesan newspapers.

The newspaper’s circulation stood at 78,000 after a 10% cut in distribution in parishes went into effect in January, according to Weismantle, 54, who had been with the Pittsburgh Catholic for 37 years. The figure includes about 35,000 individual subscribers with the rest attributed to a mandated circulation plan that required each parish to purchase enough papers for 40% of its households.

About half of the newspaper’s revenue came through circulation and the other half through advertising. While the newspaper was running a deficit, Weismantle said she and editor Bill Cone had developed a fundraising campaign that they were preparing to introduce.

“We have a fantastic team. Everybody worked so hard, worked so well together because to us it was an apostolate. It was a vocation. We were working for Jesus Christ. That’s who we were serving,” she told CNS.

Mady admitted the decision to suspend publication came at a “difficult time.”

“This is not something we were looking for. It was decision that came on short notice because of the coronavirus and Mass suspension,” she explained.

Mady said for now the diocese’s “connectivity with people is going to be pretty much online, TV and radio.”

“And when the dust settles, we don’t know if that will be a couple of weeks or longer, we will reevaluate and determine how to move forward,” she said.

Meanwhile, Weismantle and the rest of the Pittsburgh Catholic staff are faced with filing unemployment claims and trying to find work as an economic recession appears on the horizon because of the massive shutdowns across the U.S. economy in response to COVID-19.

NEXT: N.J. archdiocese launches website for parish donations during crisis