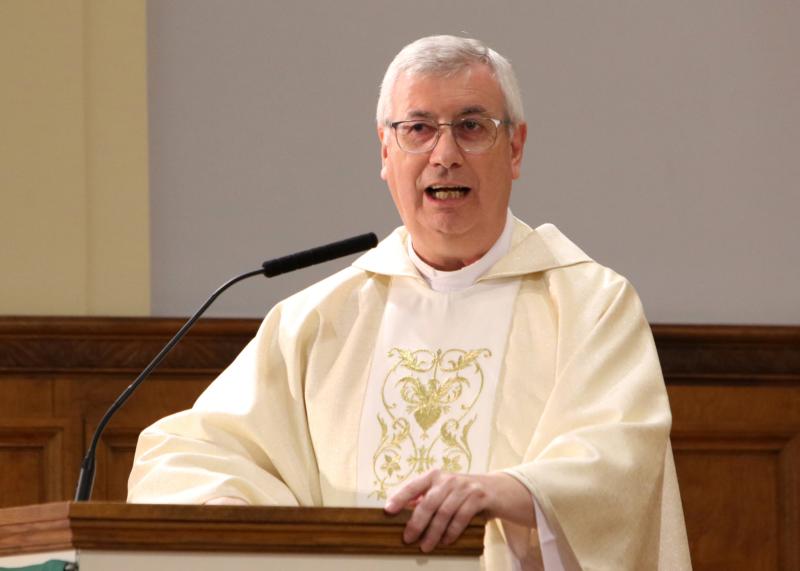 Pope Francis has appointed Father Luis M. Romero Fernandez, vicar of Hispanic ministry and evangelization for the Diocese of Rockville Centre, N.Y., to be an auxiliary bishop of the diocese. Bishop-designate Romero, 65, who is a priest of the Institute of Christ the Redeemer, also serves as pastor of Our Lady of Loretto Church in Hempstead, N.Y., and is seen addressing the congregation at the end of Mass in 2017. (CNS photo/Gregory A. Shemitz)

WASHINGTON (CNS) — Pope Francis has named Father Luis M. Romero Fernandez, who was recently appointed as vicar of Hispanic ministry and evangelization for the Diocese of Rockville Centre, New York, to be an auxiliary bishop of the diocese.

The appointment was announced March 3 in Washington by Archbishop Christophe Pierre, apostolic nuncio to the United States.

Bishop-designate Romero, 65, also is pastor of Our Lady of Loretto Parish in Hempstead, New York. A member of the Institute of Christ the Redeemer, he has served his religious congregation in many capacities since his 1981 ordination to the priesthood, including as provincial superior in a number of countries where the congregation’s priests serve.

He was last provincial superior for the congregation, whose members also are known as Idente Missionaries, in India from 2011 to 2013.

Born in Palencia, Spain, he is fluent in English and Spanish and has knowledge of French, Portuguese and Italian.

Bishop Barres said in a statement the diocese “rejoices” in the announcement of its new auxiliary and called it “an outstanding appointment to help pastor this, the eighth largest diocese in the nation.”

He said with his “humble spirit,” Bishop-designate Romero “is a true intellectual with the ‘smell of the sheep.’ He is a global churchman who lives the Idente missionary charism in an inspirational way.”

Bishop Barres quoted from St. John Paul II’s 2003 apostolic exhortation on the role of the bishop in the church (“Pastores Gregis”): “The pastoral ministry received in episcopal consecration, which sets the bishop ‘before’ the other faithful, finds expression in his ‘being for’ the other members of the faithful while not detracting from his ‘being with’ them.”

This aptly describes Bishop-designate Romero’s “pastoral charity and leadership, and his humble and joyful missionary spirit,” Bishop Barres said. “It will be a joy to ordain him a bishop.”

The newly named auxiliary expressed his “deepest gratitude” to the pope, “whose charism I have in the highest esteem.”

Bishop-designate Romero’s also expressed “special thanks and communion to our dear Bishop John Barres, whose ‘dramatic missionary growth’ is for all of us a commitment and a horizon, and for the faithful of the entire diocese, the blessed land in which Christ has put me.”

He thanked Bishops Murphy and Bishop Brennan for receiving the Idente Missionaries in the diocese.

“To the superiors, sisters and brothers of the Idente community, my communion always and my gratitude in the filial joy of the charism that we have received as a religious family from our founder, Fernando Rielo,” Bishop designate Romero added, adding his “thrilled thanks” to his Hempstead parish “for its humble greatness, and to my family in Spain for its roots of love and joy.”

Luis Miguel Romero Fernandez was born June 16, 1954. He studied philosophy and theology at the International Seminary of the Idente Missionaries in Tenerife, Spain. He also completed bachelor’s and master’s degrees in biological science at the University of Seville.

He continued his education at the Autonomous University of Madrid, earning bachelor’s and master’s degrees in philosophy and letters there. He also has a doctorate in medicine from the University of Saragossa, in the in the Aragon region of Spain.

Ordained Sept. 11, 1981, in Tenerife, then Father-Romero served in spiritual and academic roles in Spain, Bolivia, Chile and Ecuador. He was a university professor and administrator. Father Romero was the chancellor and rector-chancellor of the Private Technical University of Loja, Ecuador, which is a Catholic university under the administration of the Idente Missionaries and considered one of the top universities in Ecuador.

In addition, Father Romero was director of campus ministry and adjunct director of the religious sciences department at the Bolivia Catholic University in La Paz.

He was the chaplain of campus ministry) at the St. Joaquin Campus of Pontifical Catholic University of Chile in Santiago. Father Romero also served as director of the campus ministry in the Diocese of Cadiz, Spain.

Bishop-designate Romero has been published in numerous publications and has presented at conferences in the fields of biology, philosophy of science, ethics, theology, distance education and university management.

He has held leadership roles in the Idente community, including as provincial superior in Spain, Bolivia, Chile and India, He also has served as pastor of parishes in Bolivia and Chile.

The Institute of Christ the Redeemer, which was founded by Fernando Rielo in 1959 on the island of Tenerife, has men and women religious men as well as married missionaries as members.