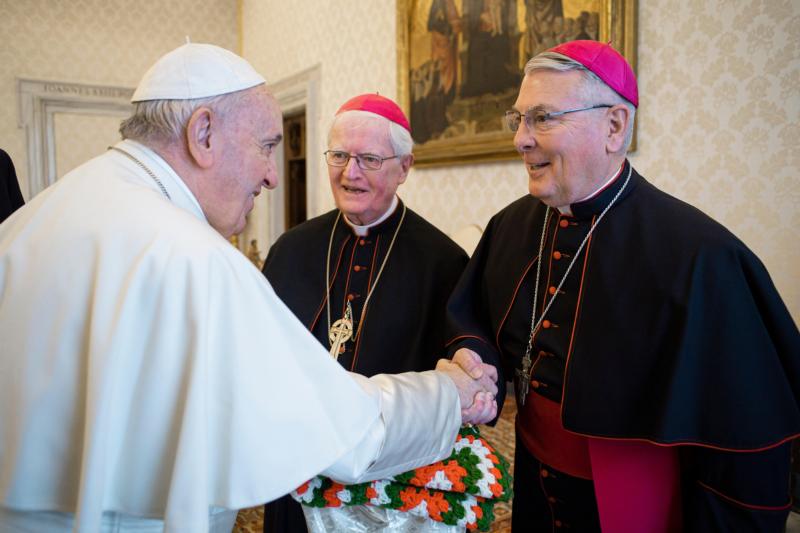 Pope Francis greets retired Bishop John K. Boland of Savannah, Ga., (center) and Bishop Gregory J. Hartmayer of Savannah at the Vatican Feb. 13, 2020. The pope has appointed Bishop Hartmayer to be the archbishop of Atlanta. The appointment was announced in Washington March 5, 2020. (CNS photo/Vatican Media)

WASHINGTON (CNS) — Pope Francis has appointed Bishop Gregory J. Hartmayer of Savannah, Georgia, to be the archbishop of Atlanta.

He succeeds Archbishop Wilton D. Gregory, who was Atlanta’s archbishop from 2005 until he was appointed to head the Archdiocese of Washington in 2019.

The appointment was announced March 5 in Washington by Archbishop Christophe Pierre, apostolic nuncio to the United States.

A Conventual Franciscan, Archbishop Hartmayer, 68, has served as Savannah’s 14th bishop since Pope Benedict XVI appointed him to head that diocese July 19, 2011.

In Atlanta, Auxiliary Bishop Joel M. Konzen has been serving as administrator of the Archdiocese of Atlanta since Archbishop Gregory’s appointment to Washington.

Archbishop Hartmayer will be installed as Atlanta’s archbishop May 6 at St. Peter Chanel Church in Roswell, Georgia.

“I warmly welcome him as an episcopal colleague who will join (Atlanta Auxiliary) Bishop Bernard E. Shlesinger III and me in caring for this wonderful Catholic community,” Bishop Konzen said in a statement issued shortly after the announcement of Archbishop Hartmayer’s appointment.

“We are looking forward to formally welcoming our new shepherd. I ask you to keep Archbishop Hartmayer, Bishop Shlesinger and me in your prayers as we prepare for that happy day,” he added.

Gregory John Hartmayer, son of the late John and Sally Hartmayer, was born Nov. 21, 1951, in Buffalo, New York. He was raised in Tonawanda, New York, a northern suburb of Buffalo. His family belonged to St. Amelia Parish, and he attended the parish elementary school.

Archbishop Hartmayer then pursued studies at St. Hyacinth College and Seminary in Granby, Massachusetts, where he earned a bachelor’s degree in philosophy. He professed his solemn vows as a Conventual Franciscan friar on Aug. 15, 1973. He was ordained a priest May 5, 1979, by Bishop Howard J. Hubbard of Albany, New York, at the Cathedral of the Immaculate Conception in Albany.

Archbishop Hartmayer also has three master’s degrees: in divinity from St. Anthony-on-Hudson in Rensselaer, New York, in pastoral counseling from Emmanuel College in Boston and in education from Boston College.

After his ordination, he was a guidance counselor, teacher and principal at schools in Baltimore, in various cities in New York and in Florida.

He has held posts within his religious order’s Province of St Anthony of Padua and has been a delegate to provincial chapters.

Archbishop Hartmayer has an older brother, C. Douglas, and a younger brother, John, both of whom continue to live in western New York with their families. His sister, Mary Jo Kotacka, and her husband, Rolf, live in Bluffton, South Carolina.

Contributing to this story was the staff of The Georgia Bulletin, newspaper of the Archdiocese of Atlanta.