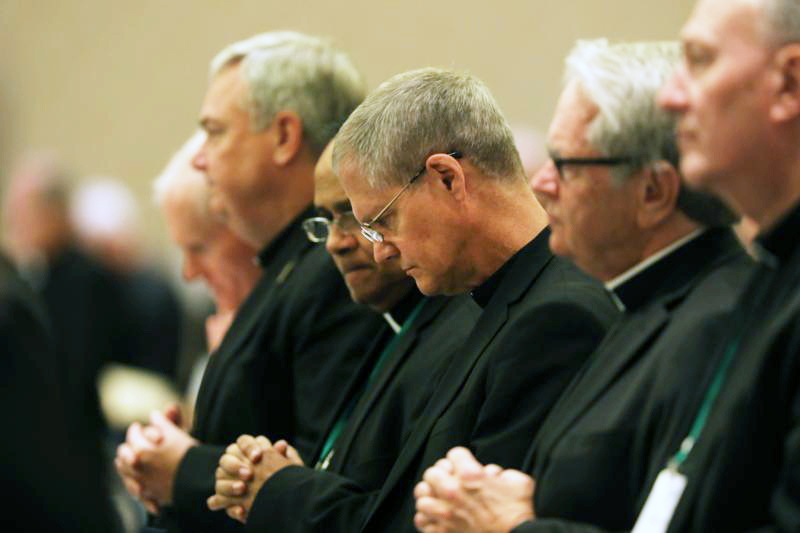 Archbishop Paul D. Etienne of Seattle, center, and other prelates pray during the fall general assembly of the U.S. Conference of Catholic Bishops in Baltimore Nov. 12, 2019. The third-party reporting system to record abuse complaints against bishops, approved in November, has officially begun. (CNS photo/Bob Roller)

The mechanism incorporates a website and a toll-free telephone number through which individuals can file reports regarding a bishop.

The nationwide system is being implemented by individual dioceses under the direction of each respective cardinal, archbishop or bishop. The information gathered will be protected through enhanced encryption.

Bishop John M. Botean of the Romanian Catholic Eparchy of St. George in Canton, Ohio, was set to post a notice on the diocesan website March 16 as the service started.

“I’ll have just a little explanation of what the service is,” he told Catholic News Service.

Because the Eastern-rite eparchies have no metropolitan archbishops, Bishop Botean said he expects that reports filed through the new system will be sent directly to the apostolic nuncio in Washington, Archbishop Christophe Pierre, for review.

Bishop Botean welcomed the reporting system as well. “It’s too bad that it’s come to this, but if it’s necessary, here it is,” he said.

In the Archdiocese of Baltimore, which in January 2019 implemented its own system for reporting allegations against bishops, Auxiliary Bishop Adam J. Parker said CBAR is similar in that it will be accessible from the archdiocesan home page and by phone.

Posters will be displayed at each parish promoting the national hotline as well as information about contacting the archdiocese’s Child and Youth Protection Office.

“Our intention was that the (nationwide) system — which we are implementing locally as a metropolitan — would be no less robust than what we had implemented here in Baltimore,” Bishop Parker said.

Denver-based Convercent developed the reporting system under a two-year contract with the U.S. Conference of Catholic Bishops. The company specializes in ethics and compliance management for businesses and organizations.

Under the system, the company gathers information and routes reports to the appropriate church authority consistent with canon law. It does not conduct any investigation.

Approved by the U.S. bishops in June at their spring general assembly, the reporting mechanism meets the requirements established by Pope Francis in his “motu proprio” “Vos Estis Lux Mundi” (“You are the light of the world”) to have a way of receiving reports of sexual misconduct by a bishop.

“Motu proprio” is a Latin phrase that means “on one’s own initiative.” Popes use it to signal a special personal interest in a subject.

— Calls initially will come into a central phone bank, where trained personnel will ask for information about the allegation being made including the name of the person making the report and his or her contact information. People also will have the option of filing a report online if they do not want to call. People will not be required to give their name if they wish to remain anonymous.

— The information also will be forwarded to a layperson designated to assist the bishop in receiving allegations.

— After review, the metropolitan or senior suffragan will send the report the apostolic nuncio in Washington.

— The nuncio is required to send the report and the metropolitan’s assessment to the Vatican, which has 30 days to determine if a formal investigation is warranted. If so, a bishop will be authorized to oversee an investigation.

— Vatican officials will review the findings of the investigation and determine the appropriate process leading to a final judgment.

As each case is filed, the person reporting an incident will be given a case number and password that can be used to follow progress of their particular case.

Individuals who file a report also will be encouraged to contact local law enforcement if they believe they have been a victim of a crime.

Anthony Picarello, USCCB associate general secretary, told the bishops during their fall general assembly in November the system is designed to filter complaints so that only those addressed in the “motu proprio” will be forwarded.

Under CBAR, people with complaints about any other actions of a bishop, such as diocesan assignments, church closings, liturgy or homily content, will be asked to contact the appropriate diocese or eparchy directly.

Allegations of sexual abuse by a priest, deacon, religious, diocesan staff member or volunteer, will be directed to the local diocesan or eparchial victim assistance coordinator under the process that has been in place under the 2002 “Charter for Protection of Children and Young People.”

Pope Francis released his “motu proprio” last May following a worldwide meeting of bishops’ conference leaders at the Vatican early in 2019 to discuss the church’s response to clergy sexual abuse. The document specifically addresses allegations of sexual misconduct and other accusations of actions or omissions intended to interfere with or avoid civil or church investigations of such misconduct by clergy.

The “motu proprio” requires dioceses and eparchies worldwide to establish “one or more public, stable and easily accessible systems for submission of reports” by May 31.

Contributing to this report was Christopher Gunty, associate publisher/editor of Catholic Review Media, the media arm of the Archdiocese of Baltimore.

NEXT: Priest in Diocese of Yakima hospitalized with coronavirus