Priest in Diocese of Yakima hospitalized with coronavirus 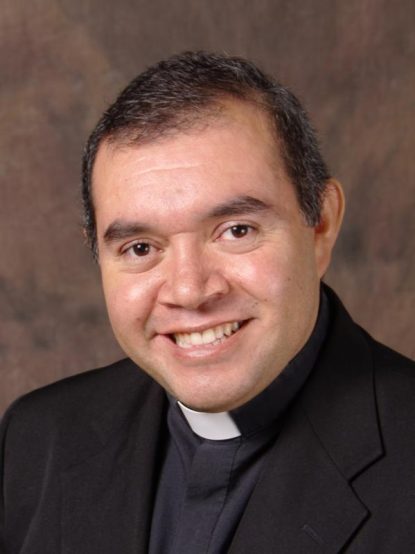 Father Alejandro “Alex” Trejo, pastor of Our Lady of the Desert Parish in Mattawa, Wash., pictured in this undated photo, has tested positive for the coronavirus, according to Bishop Joseph J. Tyson of Yakima, Wash. Father Trejo has been hospitalized at Kadlec Medical Center in Richland, Wash., since March 1 for treatment of pneumonia caused by the virus. (CNS photo/courtesy Diocese of Yakima)

YAKIMA, Wash. (CNS) — A priest of the Diocese of Yakima has been hospitalized for two weeks with COVID-19, the disease caused by the coronavirus.

Father Alejandro “Alex” Trejo, pastor of Our Lady of the Desert Parish in Mattawa, Washington, continued to be treated for pneumonia caused by the virus, Bishop Joseph J. Tyson of Yakima said March 16.

The 48-year-old priest has been in Kadlec Medical Center in Richland, Washington, since March 1, according an announcement by the diocese.

“Father Alex continues to recover well and we are appreciative of the prayers of many, many parishioners and the excellent care of the hospital staff,” Bishop Tyson said in a statement. “We also are very thankful for the work of the Grant County Health District.”

The diocese was working with health district staff to identify the people with whom Father Trejo has been in close contact within the last month, the diocese said.

The coronavirus was confirmed as the cause of Father Trejo’s illness late March 15, following a third test by the health district. Two earlier tests were inconclusive, the diocese said.

Health district officials have asked the people who have had contact with Father Trejo to monitor themselves for flu-like symptoms.

Bishop Tyson described Mattawa, about 60 miles northeast of Yakima, as a “close-knit community,” while “the parish is the center of many people’s lives.”

He also said that he met with parish leaders March 14 to prepare its response of a positive test. Parish facilities underwent “deep cleaning” March 13 in advance of weekend Masses, the diocese said.

However, Washington Gov. Jay Inslee expanded a ban on gatherings of more than 250 people, leading the bishop to suspend all public Masses except for funerals and weddings already scheduled.

The diocese said Father Trejo was expected to be released within days to a private residence to continue his recovery. No timeline has been set for his return to active ministry.

The diocesan statement said Father Trejo led an eight-day pilgrimage to the Holy Land, returning Feb. 18. He reported a high fever March 1 and self-quarantined himself in the parish residence for priests after his last Mass that day under supervision of a local health care provider, according to the diocesan announcement. When his condition worsened later in the day, he was hospitalized that evening.

The priest’s illness was the second confirmed coronavirus case in the diocese. A member of the St. Joseph-Marquette Catholic School community in Yakima was confirmed to have the illness March 13.

The school was being cleaned and sanitized and will remain closed until at least April 24 under an order from Inslee that covered all schools in Washington state.