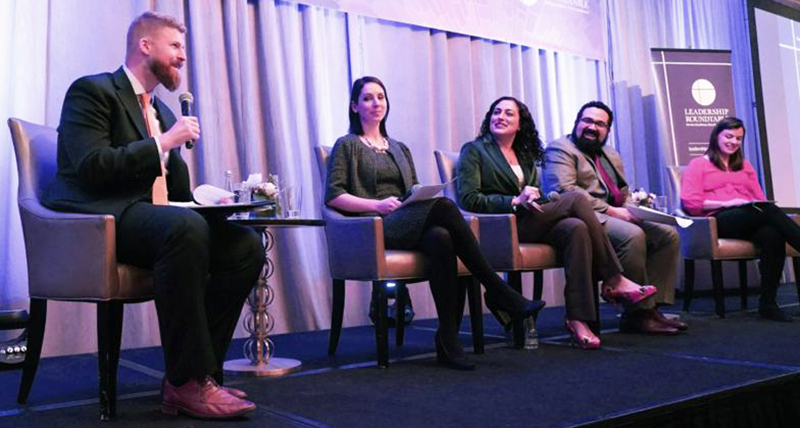 Jonathan Lewis, the assistant secretary for pastoral ministry and social concerns for the Archdiocese of Washington, speaks during a panel discussion on young adult Catholic leaders during the 2020 Catholic Partnership Summit Feb. 29, 2020. The Catholic Leadership Roundtable was organized to respond to the clergy sexual abuse crisis through a new culture of leadership in the church. (CNS photo/Ralph Alswang, courtesy Leadership Roundtable)

WASHINGTON (CNS) — A summit of U.S. Catholic leaders was convened recently in Washington “to continue to respond to the twin crises in our church, a crisis of abuse and a crisis of leadership failure,” said Kim Smolik, CEO of the Leadership Roundtable, which organized the gathering.

Speaking in a news conference call with three other summit participants, Smolik noted that the Leadership Roundtable was founded after the 2002 sexual abuse crisis “to transform the leadership and management culture in our church.”

Leadership Roundtable, based in the nation’s capital, is an organization of laity, religious and clergy that describes its mission as promoting “best practices and accountability in the management, finances, communications and human resources development of the Catholic Church in the U.S., including greater incorporation of the expertise of the laity.”

The summit had panels on envisioning a new culture of leadership in the church, building a culture of ethical financial management and stewardship, and inviting young adults to the leadership table, followed by roundtable discussions among the participants.

She said a summit report will be written this spring and distributed to Catholic leaders and made available to Catholic institutions across the United States.

Also on the call with news media, Sister Carol Zinn, a Sister of St. Joseph from Chestnut Hill in Philadelphia, who is executive director of the Leadership Conference of Women Religious, said the gathering offered “a very powerful experience of the vision of the Vatican II church,” of a church “as pilgrim people and people of God” walking together, approaching church leadership and governance in a spirit of co-responsibility and co-partnership, with the church drawing on the gifts of all its members.

“What I found was a lot of energy in the room across all the sectors, in terms of how might the church as an institution practice more faithfully that pilgrimage idea of walking with both our ordained brothers and the laity,” she said.

Another participant in the press call, Jonathan Lewis, assistant secretary for pastoral ministry and social concerns for the Archdiocese of Washington, said he felt encouraged after moderating a panel on the empowerment of young Catholic leaders.

Building on that diversity of perspectives, he said the gathering fostered “a unity of vision of our focus on forming a church that looks more like Jesus,” and working toward a pastoral conversion of both hearts and structures.

Lewis, who was named by Pope Francis to be an observer at the 2018 Synod of Bishops on young people, faith and vocational discernment, said an aspect of what the pope has called a synodal church is “that we increase the number of voices at the table,” and listen to voices that are often not heard, especially the marginalized, who can include not only the poor, but also young people.

“We are facing, in some places sooner than others, a new crisis of disaffiliation of young people, of a generation that is lost or is being lost, drifting away,” said Lewis.

The way to counteract this, he said, “is being the best church we can be, knowing people by name, the Jesus method of evangelization, getting people to walk with us, one-by-one, building peer intergenerational mentorship in everything we do, and a long-term spiritual accompaniment with people, especially in parish life at those special touch points — marriage preparation, RCIA (and) registering for a church.

Summit participant Father J. Bryan Hehir, who is secretary for health and social services for the Archdiocese of Boston, noted in the call with media the Leadership Roundtable’s origins in the 2002 abuse scandal.

One underlying theme at the summit, he said, was “we must remember what happened, because we owe it to the victims, we owe it to the families, we owe it to the church itself, and we owe it to the society we serve. We cannot forget how many mistakes we made that led to that tragedy. At the same time, it is important to remember the past and to refuse to be paralyzed by the past. Never forget it. But the question is, what are you doing about it?”

Father Hehir said that means a key challenge before Catholic leaders “is rebuilding the trust between American society and the church in the United States. This is a crucially important reality, because we try to serve this culture by health care, by education, by social service, but in order to serve, we need the trust of the wider society.”

In his homily at the summit’s Feb. 28 opening Mass, Washington Archbishop Wilton D. Gregory noted that the prophet Isaiah could be called “the Pope Francis of his own time,” calling on people to serve the poor and others on the periphery of society. That priority, he said, offers a message for Lenten fasting, and for church leadership.

“Leadership within the church, when properly understood, has always been identified with service and never merely to be equated with title or rank, as Jesus repeatedly on multiple occasions reminded His first disciples and all of us as well,” said Archbishop Gregory.

“We all need such reminders, because we are prone to forget the irrevocable link between service with leadership,” he said. “Indeed that link will be a key focus of this conference dedicated to the evolving future of church leadership.”

Archbishop Gregory noted that emphasis on service resonates with young Catholics, who “the church so desperately needs in leadership for our common future.”

“They are not necessarily irreligious, agnostic or even hostile toward faith and its practices and customs,” he said. “They simply follow a pattern that Isaiah first recommended centuries before Christ and that Christ himself confirmed and perfected when he established his church.”

PREVIOUS: Priest in Diocese of Yakima hospitalized with coronavirus