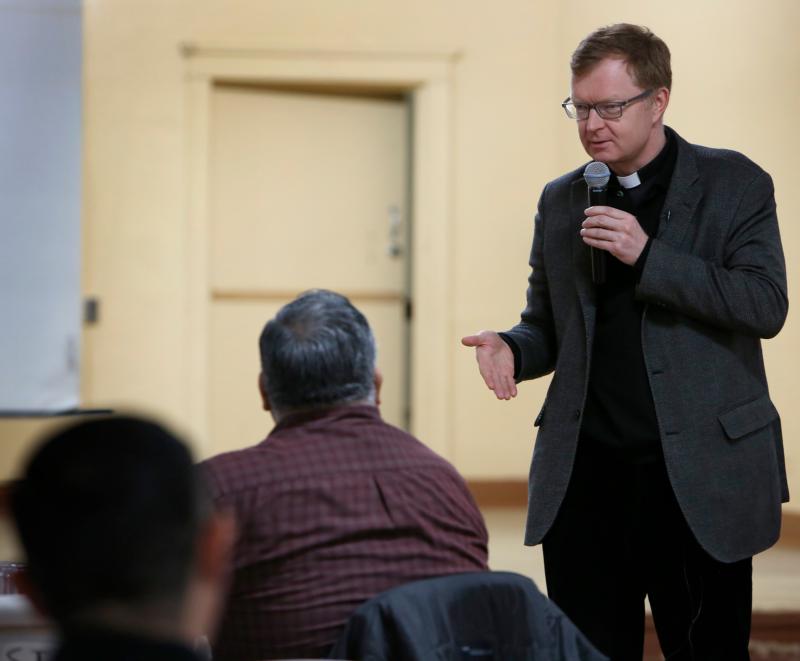 CHICAGO (CNS) — Jesuit Father Hans Zollner, one of the world’s leading experts on safeguarding minors, said the church is suffering “institutional trauma” from clerical sexual abuse, trauma that it must learn to integrate into its theology and understanding of salvation if it is to overcome it.

He visited the Archdiocese of Chicago March 1-3 to speak with seminarians, clergy and members of religious congregations on “The Present Status of Safeguarding in the Church,” which also was the topic of his March 2 DePaul University talk.

Father Zollner, a German, is a licensed psychologist and psychotherapist with a doctorate in theology, the president of the Center for Child Protection at the Pontifical Gregorian University in Rome, a member of the Pontifical Commission for the Protection of Minors and a consultor to the Vatican’s Congregation for Clergy.

He was one of four leaders appointed by Pope Francis to organize the February 2019 summit on abuse for the presidents of episcopal conferences.

In his presentation, Father Zollner compared the church to an individual suffering from trauma who tries to wall it off, keeping it separate from everyday life. That can work well for a time, he said, but eventually the wall develops cracks, the trauma bleeds through and the person suffers flashbacks, reliving rather than simply remembering the traumatic event.

“My theory is that is happening in the Catholic Church now,” the priest said. “What has been hidden is coming out now, but that brings out the whole history.

“When people read news of an abuse that happened 50 years ago, they read it like it happened yesterday and nothing has changed. … The awareness of the trauma that had been lingering 30, 40, 50 years has undermined the self-perception of the church.”

Father Zollner said 2018 was a watershed for the global abuse crisis, starting with Pope Francis’ defense of accused Chilean priest Fernando Karadima and Bishop Juan Barros in January of that year, saying he had seen no proof that the accusations against Karadima were true.

Less than two weeks later, after a public outcry, the pope sent Archbishop Charles J. Scicluna of Malta, adjunct secretary of the Congregation for the Doctrine of the Faith and the Vatican’s chief abuse investigator, to Chile, where he spoke to some 70 victims. In May 2018, Pope Francis called the 34 bishops of Chile to Rome, where they all offered their resignations.

“A whole bishops’ conference offering their resignations — this is something that has never happened in church history,” Father Zollner said.

“The pope didn’t address it as a matter of dealing with this priest, or with the archbishop and former archbishop of Santiago,” he said. “All of them knew something about the abuse that was going on. For the first time, this pope addressed this as an institutional, a structural, a systemic issue.”

As of now, Father Zollner said, eight Chilean bishops have been removed from office and two have been dismissed from the clerical state, as has Karadima.

That summer, the U.S. church was rocked by accusations that then-Cardinal Theodore E. McCarrick, retired archbishop of Washington, had abused several children and seminarians in past years; he was laicized in February 2019. Also in the summer of 2018 was the release of the Pennsylvania grand jury report.

In Australia, meanwhile, Cardinal George Pell was convicted on five counts related to the sexual abuse of two boys decades earlier. His final appeal is set to be heard sometime this March.

The February 2019 summit on church response to the abuse crisis held by Pope Francis and the heads of all of the bishops’ conferences — which included talks by abuse survivors — has resulted in actions. Those include new laws regarding the safeguarding of minors and other vulnerable people in the Vatican City State and the issuance of the papal mandate “Vos estis lux mundi” (“You are the light of the world”) for the universal church.

The papal mandate revised and clarified norms and procedures for holding bishops and religious superiors accountable in protecting minors as well as in protecting members of religious orders and seminarians from abuse.

It requires all priests and religious to report suspected abuse or cover-ups and encourages any layperson to report through a now-mandated reporting “system” or office that must be set up in each diocese by June of this year. It also insists leaders be held accountable for committing abuse themselves or covering up or failing to address abuse accusations.

In December, the pope waived the requirement of secrecy for anyone who has reported abuse by a member of the clergy or testified in a canonical trial having to do with clerical sexual abuse.

On Feb. 28, the Vatican announced the creation of task force to advise bishops’ conference and congregations of religious on creating or updating their own guidelines for responding to abuse.

The task force will be under the authority of Archbishop Edgar Pena Parra, the third-ranking official in the Vatican Secretariat of State, and will be supervised by the four members of the organizing committee of last year’s summit on the protection of minors: Chicago Cardinal Blase J. Cupich; Father Zollner; Archbishop Scicluna; and Cardinal Oswald Gracias of Bombay.

“For all this to happen in a year, for the Vatican, that’s lightning speed,” Father Zollner said after his talk.

At the same time, the church as an institution has many challenges, he said.

The church includes both perpetrators and victims, people who want to bring the problem to light so it can be cleaned up and people who want to cover it up, and, until now, little in the way of expertise and experience developed in one part of the world was being used to help leaders in other areas.

Father Zollner, a theologian, decried the lack of theological thought about the abuse crisis and what it means for the church and for the church’s understanding of salvation.

“Tell me where theology, in the face of the abuse, has changed,” he said. “Where do we ask, what does God want us to do now? Where are the theologians addressing this?”

The church, he said, is good at standing with the vulnerable: the hungry, the poor, the immigrants and refugees. But it must also stand with those who have been victimized within the church.

“If we don’t, we are not walking with the suffering Christ,” he said.