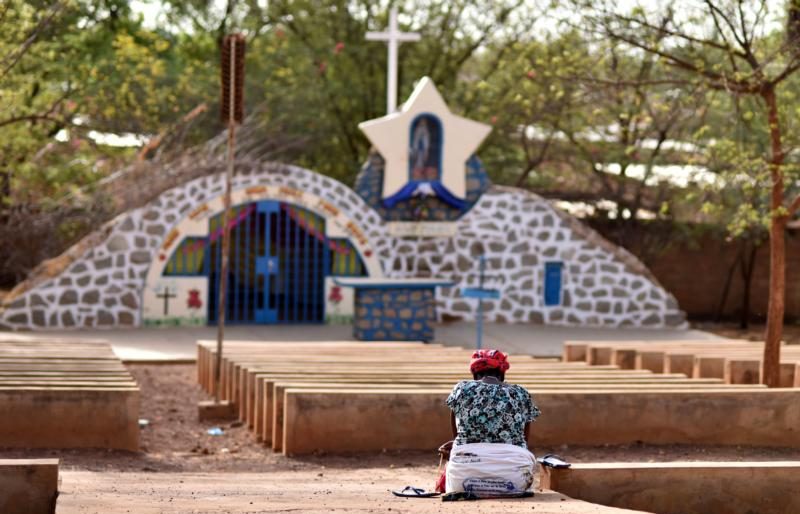 A displaced Christian woman prays in front of a grotto with a statue of Mary in Kaya, Burkina Faso, May 16, 2019. Hundreds of thousands of people have been forced out of their homes in Burkina Faso as Christian communities are targeted in a spiral of Islamist killings. (CNS photo/Anne Mimault, Reuters)

OXFORD, England (CNS) — Hundreds of thousands of people have been forced out of their homes in Burkina Faso as Christian communities are targeted in a spiral of Islamist killings.

The surge of attacks has forced some families to flee and leave everything behind, and the violence is threatening to spread to other countries, said Jennifer Overton, West Africa regional director for Catholic Relief Services.

She said dozens of Catholic schools had been forced to close after their teachers fled.

Overton, who toured affected areas, said she had met a farmer in the northern Kaya Diocese who had allowed more than 500 displaced families to settle on his land and another once-prosperous landholder who was living in a lean-to with his children after escaping repeated shooting sprees.

A Christian woman had taken shelter with her daughters at a government encampment in a large town, Overton said, only to be driven out when an armed gang attacked the facility and shot up the local church.

“We want people to have productive lives, set up work and send their kids to school,” she said. “But that won’t happen if all we see is more chaos and crisis, with more people needing help. It’s in everyone’s best interest to stop this violence before it gets worse.”

Security has rapidly deteriorated in largely arid Burkina Faso, Mali and Niger, with more than 4,000 killings by armed groups in 2019, according to a Feb. 21 statement by the U.N. High Commissioner for Refugees, which said counter-campaigns by national armies had been marred by poor equipment and rights violations.

The statement said more than 4,000 people were now fleeing their homes daily in Burkina Faso, with 150,000 “terrified residents” uprooted in February alone.

On Dec. 1, a Protestant church was attacked by armed men on motorcycles that left 14 dead in Hantoukoura, Burkina Faso, while Feb. 10 Islamists stormed the northern town of Sebba, abducting and murdering a Protestant pastor and four congregation members.

The Vatican-based Fides agency reported Catholics had been among 24 killed when attackers opened fire on a prayer meeting at nearby Pansi Feb. 16. The agency said Feb. 20 the church’s northern Dori Diocese had closed three of its six parishes “due to terrorism.”

Overton said armed groups were “exploiting religious and ethnic differences” to fuel conflict, but added that the root cause of violence needed addressing through continued development to offset poverty and lack of opportunity.

“This isn’t a religious conflict, and Burkina Faso has long been a place of interfaith tolerance,” she said. “But the terrorists are preying on community strains, attacking places of worship belonging to both faiths and seeking to bring down Christian and Muslim leaders, who are pillars of strength in their communities.”

Catholics make up a fifth of the 16.5 million inhabitants of Burkina Faso, whose president, Roch Christian Kabore, signed a 19-point accord with the Vatican last July guaranteeing the church’s juridical status and public activities.

In January, the Catholic charity Aid to the Church in Need said Immaculate Conception sisters had taken in hundreds of refugees at convents in Ouagadougou and other towns.

In a Feb. 19 appeal, Burkina Faso’s bishops’ conference confirmed that Catholic parishes, schools and dispensaries had been forced to close because of the “widening field of action of terrorism.” It added that the church faced a critical situation and urged Catholics to continue “announcing Jesus Christ without exposing pastoral workers too much.”

The Regional Episcopal Conference of West Africa also warned Feb. 21 that 2020 elections in several West African countries necessitated “wisdom and a spirit of responsibility” when many countries faced “a loss of their cultural and ancestral patrimony, displacement, unemployment, famine, exodus and migration.”

Overton said a lack of attention to sub-Saharan and West Africa risked exacerbating the violence and driving more countries “into the hands of extremists.”

“We have a real opportunity to stop this violence and push the extremists out, if we support communities and address grievances easily manipulated by these militant groups. This means going beyond military intervention and investing more in the region — a robust global humanitarian response which addresses long-term peace and stability,” she said.

NEXT: Pope asks Catholics to join week of climate reflection, action in May