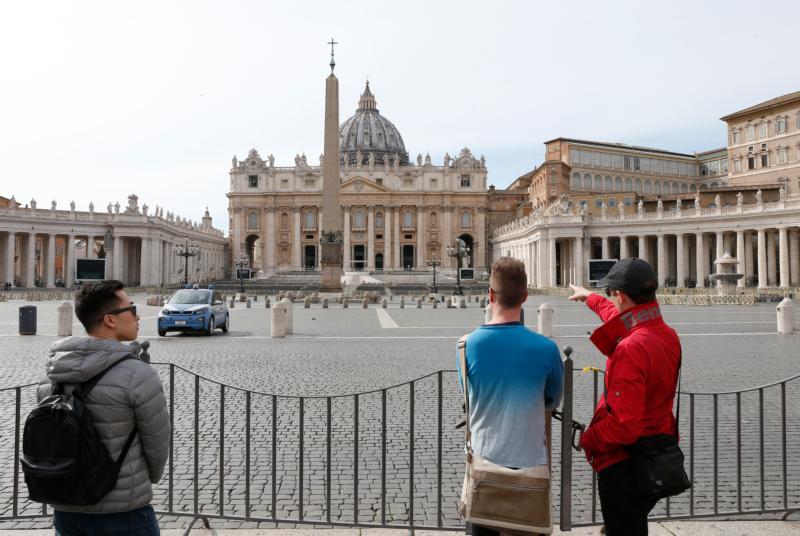 People look at an empty St. Peter's Square at the Vatican March 10, 2020. The Vatican has closed St. Peter's Square and Basilica to tourists March 10 through April 3 in cooperation with Italian emergency procedures aimed at preventing the spread of the coronavirus. (CNS photo/Paul Haring)

The new measure, announced March 10, was the latest move by the Vatican to help stop the spread of the coronavirus by reducing access to places that attract large groups of people. On March 8, the Vatican closed the Vatican Museums, the necropolis and other museums connected with the Vatican.

“In coordination with measures introduced by Italian authorities,” the Vatican said in a communique, “starting today, St. Peter’s Square and Basilica will be closed to guided tours and tourists.”

Italian police were located as usual at the perimeter around the square that separates Vatican City State and Italian territory, as well as under the colonnade. But they were not allowing people to enter the square unless they could document it was for work reasons or other exceptions currently allowed by Italian law.

A small number of tourists could be seen taking selfies outside the square, and a group of tourists was looking for information about the Wednesday general audience. The March 11 audience was not going to be a public event but was to feature Pope Francis offering his catechesis broadcast online on Vatican media outlets.

The decision to close St. Peter’s followed a major measure implemented by the Italian government March 9, discouraging people nationwide from all unessential travel and from leaving their homes unless it was for work, getting food, medicines or seeing a doctor.

Churches and places of worship in Italy are allowed to stay open, but they must guarantee people stay three feet apart and avoid congregating. All civil and religious ceremonies like weddings and funerals are not allowed until after April 3.

St. Peter’s Square is Vatican territory, according to the Lateran Pacts agreement signed in 1929 between the Italian government and the Vatican. But since the Vatican is surrounded by Italian territory, the agreement allowed Italian police to provide security and law enforcement in the square and the entrance area of the Vatican Museums.

A member of the Italian police told CNS that all forms of assembly in public spaces or places open to the public — both indoor and outdoor — are forbidden all across Italy. Even though the square is under the jurisdiction of Vatican City State, it is subject to Italian laws, the police officer said.

There was an “impressive silence” inside the basilica, according to a CNS reporter who was allowed inside. Only a “handful of guards” were in the basilica, and just a few priests and nuns were praying in side chapels before the Blessed Sacrament. A nun and a man were seen praying in front of a side altar.

The reporter said the Vatican-run bathrooms and showers for the city’s homeless were operational, but officials were only allowing one person at a time inside to use the facilities.

A Vatican maintenance crew wore masks and protective clothing, using the rare opportunity of no tourists to paint a metal railing in the square.

The Vatican said its pharmacy and supermarket would stay open, but with entrance to limited numbers of people at a time. The Vatican post office located by the square, two Vatican bookstores and the Vatican newspaper, as well as its photography service, would be closed to the public, though its services would be available online, it said.

The Vatican cafeteria would be closed to its clientele starting March 11, but it would be providing meal deliveries upon request to workers, it added.

All new measures would be in place until April 3 or further notice.

Contributing to this story was Paul Haring in Rome.

PREVIOUS: Pope urges priests to tend to sick during epidemic

NEXT: Sodalitium movement should be ‘dissolved,’ cardinal says