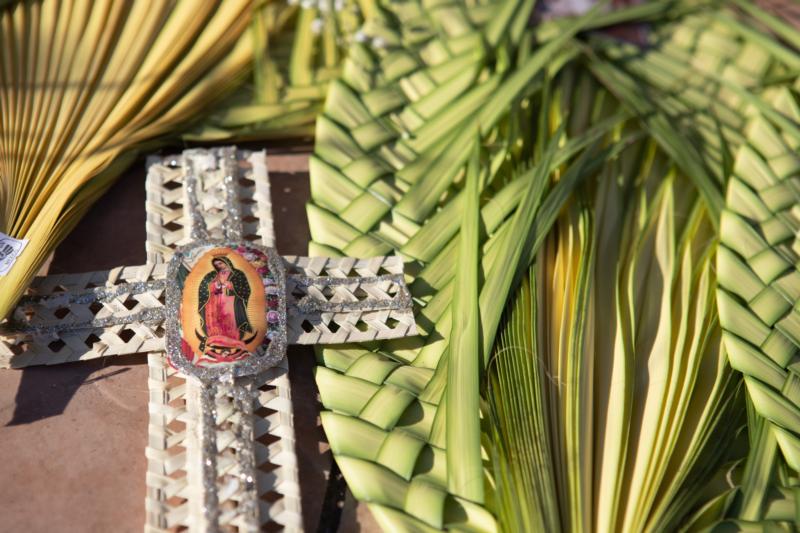 Woven palms, one in the shape of a cross with an image of Our Lady of Guadalupe, are seen outside Blessed Sacrament Catholic Church in Houston before a 2019 Palm Sunday Mass. Catholic churches around the world are now confronted with what to do with the palms they've procured, now that most public Palm Sunday Masses have been canceled amid the coronavirus (COVID-19) pandemic. (CNS photo/James Ramos, Texas Catholic Herald)

And distribution of palms later in the year might not happen, either, according to Rita Thiron, executive director of the Federation of Diocesan Liturgical Commissions.

There has been “a very large discussion” on the issues surrounding palms, Thiron told Catholic News Service, especially since for parishes, “more than likely their palm order has arrived.”

But the key point, Thiron said, is that “we are under lockdown orders from the government, so we will not be distributing palms and blessing them. Nor will we be putting them out for people to take, because that would be an opportunity to spread germs.”

One thing that can be done with the palms, she added, is that “you may lay them out and dry them out under lamps. You can’t just leave them in the bag. They would just rot.”

The palms, Thiron said, are “associated with one day”: Passion Sunday, colloquially known as Palm Sunday. “The text for the blessing is associated with Christ’s entry into Jerusalem. We’re simply not going to do the blessing of palms in the United States, in most cases.”

Some have suggested holding on to the palms for later distribution, “That may be available later,” Thiron said, but “right now, we’re not doing that.”

In the Archdiocese of Philadelphia, parish priests may bless the palms and keep them for possible later distribution to parishioners, on a date yet to be determined.

In an April 1 letter to priests, Archbishop Thomas G. Wenski of Miami said there would no confessions or palms for the weekend ahead.

“It is not prudent for parishes to plan any activity that would encourage people to leave their homes,” Archbishop Wenski wrote. “Therefore, parishes are not to offer ‘drive-through’ palms, confessions or holy Communion or any similar type of activity.”

Miami-Dade and Broward counties, both in the Miami Archdiocese, lead the state of Florida in confirmed coronavirus cases. Also on April 1, Florida Gov. Ron DeSantis issued a stay-at-home order to curb the virus’ spread.

Archbishop Wenski urged pastors to continue livestreaming Masses and other liturgical services during Holy Week — as many are already doing — so their parishioners can participate “remotely online or through other social media.”

He also suggested that Catholics could place a palm frond on their door as “most yards in South Florida have some type of palm in them.”

NEXT: Court allows Texas ban on abortion for time being