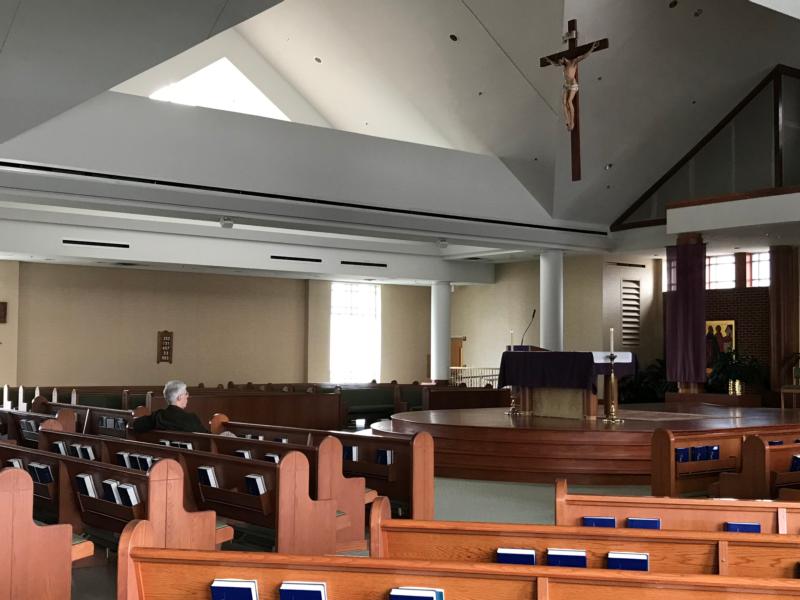 A man in Arlington, Va., sits by himself inside St. Ann Church March 20, 2020, during the coronavirus pandemic. Church professionals urge now is the time to prepare for post-pandemic ministry. (CNS photo/Ann M. Augherton, Arlington Herald)

CLEVELAND (CNS) — While church lockdowns remain the norm in much of the country, parish management and ministry professionals say now is the time for parishes and dioceses to find ways to creatively keep the faithful engaged when the weeks-long coronavirus hibernation ends.

“This moment in crisis needs to be approached not as a short-term problem, but as a moment in which really smart strategic decisions about the future that have been put off for a long time now need to be made,” said Patrick Hornbeck, professor theology at Fordham University.

The focus, Hornbeck and others advised in interviews with Catholic News Service, must be on the future so that when the lockdowns end, parishioners realize the church remains vibrant and that the role of the laity in building the community of faith is more important than ever.

They also cautioned that harsh staff and ministry cutbacks in the face of tight cash flows could seriously endanger the restart of normal parish activities and have severe consequences far into the future.

— Clergy especially, but also parish staff, must communicate with parishioners. Check-in calls to parishioners, emails inviting people to keep in touch with each other and social media posts all can build a sense of community despite widespread physical separation and accompany people through a troubled time.

— Better integrating of new technologies into ministry on the heels of new ventures in online streaming of Masses and prayer services.

— Transparency in operations, including finances, so that people feel encouraged to offer financial support now or in the future when they are able.

— Sharing responsibility between laypeople and clergy in parish and diocesan ministries and operations, thereby taking full advantage of the expertise and creativity people have as the church maneuvers through uncertain times.

“One of the things we’ve been encouraging parishes to do is that now is the time to communicate more with your people not less with your people,” said Matthew Manion, faculty director of the Center for Church Management at Villanova University.

“There can be a tendency not to get in the way of people’s lives. But in reality, in a crisis situation people look to their leaders for hope, and the church can be one of those voices, probably the strongest voice,” he said.

Mario Enzler, director of the master’s degree-level ecclesial management program at The Catholic University of America, echoed that call.

“I am encouraging clergy to reach out within their flocks,” he said. “Let people understand it is through this crisis that we can discover the meaning and beauty of hope.”

New technologies make communication much easier today. Online streaming of Masses has been the most common form of outreach to the faithful since the lockdowns began in mid-March. Some parishes have seen that online Mass participation, at least during Holy Week and Easter, is greater than actual Mass attendance.

Rick Krivanka, executive director of the Jesuit Retreat Center in Parma, Ohio, and former director of pastoral planning in the Diocese of Cleveland, said he believes people are embracing the online liturgies. The key, he suggested, will be engaging them as life returns to normal.

“People are finding it uplifting,” Krivanka told CNS. “They are understanding it is our own responsibility about not only following a routine about going to Mass every Sunday, but now people are finding very uplifting experiences because of the personal initiative they have to take (to find an online Mass).”

Knowing that people are turning to online liturgies provides church leaders an opportunity to find new ways to creatively use technology in ministry. Naturally, the goal is to have people worshipping in community when the stay-at-home orders end; the virtual reception of holy Communion isn’t possible because Catholic faith is rooted in the Eucharist, Fordham’s Hornbeck said.

Hornbeck, an Episcopalian, suggested that “virtual forms of religious engagement” can be seen not so much as “an either/or with the physical ways of engagement, but as both/and.”

Such a realization can lead to online streaming of Bible study, prayer services, book discussions and even perpetual adoration to allow more people to become involved in or return to parish activities, said Chris Lowney, a management consultant and author of “Everyone Leads: How to Revitalize the Catholic Church.”

“This moment is making us finally build up our muscles in terms of using technology to be more creative,” Lowney explained. “That’s a point we cannot lose right now. The fact is that under duress, we’re being forced to do things in new ways, things frankly we should have been learning five years ago, 10 years ago.”

As the search continues for creative ways to address the future needs of parishes and dioceses through technology, it’s time to tap the expertise of laypeople, inviting them to help the church emerge on the other side of the pandemic, Lowney added.

“Widen the circle,” he said. “Get five, 10, 15 parishioners to generate ideas. I’d really want to see if I could get a large handful of people who have relevant expertise who are going to surface ideas that I won’t and I wouldn’t expect to, frankly.”

Charles Zech, professor emeritus of church management at Villanova University, called for clergy and laypeople to take “co-responsibility” for ensuring that the faithful return to their parishes despite the increased use of technology in ministry that seems inevitable.

He pointed to the long-standing calls of St. John Paul II, Pope Benedict XVI and Pope Francis for seeking to include laity in wider areas of church life and said the crisis posed by the coronavirus may encourage the church to ever more deeply embrace these papal invitations.

Enzler said the current times will allow all people in the church to “discover the meaning” of ”Lumen Gentium,” the Dogmatic Constitution on the Church. The document from the Second Vatican Council defines the role of the church in modern times and the role of clergy and laity in relationship to the church.

The work ahead is made all the more difficult by the tremendous financial challenges parishes and dioceses are facing because weekly offertory collections have nosedived as people are not physically attending Mass. Even those who may tune in to an online parish Mass may overlook the need to maintain giving or are unable to continue some type of offering.

Even if cash flows are extremely tight, now is not necessarily the time to seek more money, the professionals cautioned. Parishioners themselves are feeling stressed about their economic future even if they remain employed and a plea for increased parish support may alienate more than help.

Enzler called for church leaders to be transparent about financial stresses but said he would find it far better to ask people to reduce hours or take a small pay cut to weather the storm. He said he has heard about priests who have stopped taking their pay to allow parish staff to remain employed.

“We know that sacrifice is redemptive and we know there is a higher Gospel and that is the Gospel of suffering,” Enzler said. “Let’s do it together. Yes, cash flows are stretched right now. But we will be OK.”

Lowney also advised against taking the harsh step of laying off or terminating staff.

“If I can keep most of my team, even if they had to absorb a short-term pay cut, for me that is preferable to terminating one, two, three people and then I have to waste three or six months to rehire once we come out of this,” he said, explaining that such a delay could permanently hobble ministry.

Villanova’s Center for Church Management has sponsored a series of webinars in recent weeks to help church leaders traverse the uncertainty brought on by the pandemic. Manion said the underlying message has been one of accompanying people in ways “that may serve the church going forward.”

“The plan to transition people back to worshipping in a full community is going to be really key,” he told CNS. “One of the keys will continue to be in relationship with each other. Our parish communities have to continue or begin to foster that sense of larger community so that it is a family we want to see when this is over.”

However long that takes, Krivanka believes a better tomorrow is ahead.

NEXT: Franciscan University to pay tuition costs for new students in fall