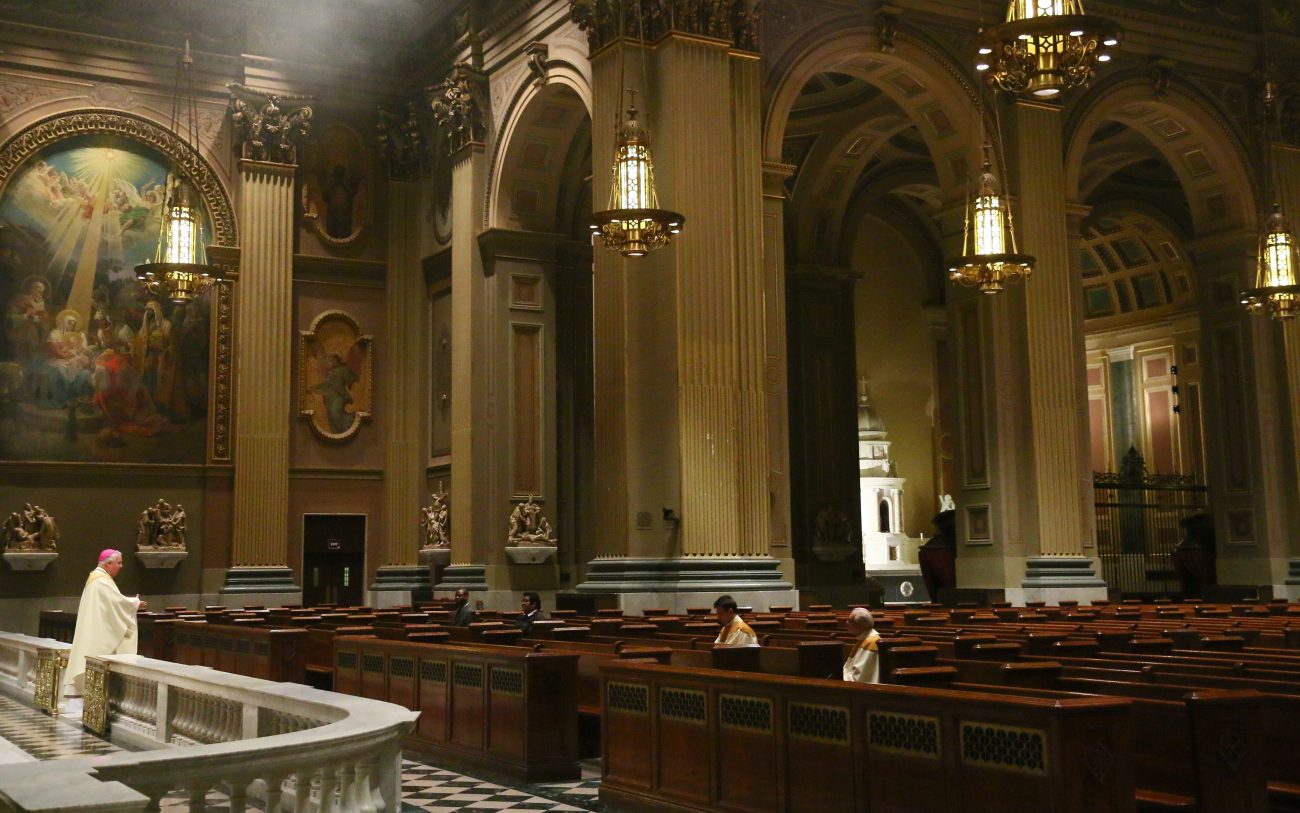 In a church usually packed with priests, Archbishop Nelson Perez gives his homily during the Chrism Mass April 6 at the Cathedral Basilica of SS. Peter and Paul, Philadelphia. (Photo by Sarah Webb)

WASHINGTON (CNS) — As the coronavirus pandemic has swept across the country, churches have been forced to follow states’ stay-in-place guidelines, which some see as an infringement of their religious freedom.

As long as places of worship aren’t singled out, but are closed just as restaurants and movie theaters are, states are within their legal rights to close them during the pandemic, said Michael Moreland, professor of law and religion at Villanova University’s Charles Widger School of Law.

Moreland, speaking during an April 11 teleconference sponsored by the Federalist Society, noted that questions will arise and will need to be addressed if these closures are expected to remain in place over an extended period.

Jonathan Turley, the Shapiro professor of public interest law at George Washington University, said places of worship that say they should be allowed to stay open would “convert the free exercise clause into a suicide pact of sorts. The interpretation not only puts the faithful at risk of infection but also their communities. ”

Writing in The Hill online newspaper, he added: “No constitutional rights are truly absolute. Rights such as free exercise of religion and free speech can be overcome with a sufficiently compelling purpose of state and the least restrictive means of achieving that purpose. There is nothing more compelling than battling a pandemic, and limiting gathering size is the only effective deterrent to the coronavirus spreading until a vaccine can be made available.”

But as the nation has struggled to curb the spread of the virus and governors have banned gatherings of more than 10 people, there also has been a varied response from state to state on just what this means for places of worship.

Some states have banned in-person worship services altogether while others have made exceptions for some religious gatherings under certain circumstances and with observation of the 6-foot social-distancing policies.

And in Kansas, a decision was announced the night before Easter by the state’s Supreme Court upholding Gov. Laura Kelly’s executive order banning religious services of more than 10 people.

The governor had filed suit after the state’s Republican-controlled Legislature overturned her ruling.

But on April 18 a federal judge blocked Kansas from limiting participation at worship services to 10 people or fewer, saying the policy potentially violates citizens’ religious freedom and free speech rights.

The ruling, issued by U.S. District Judge John Broomes in Wichita, stops the order issued by the governor and will remain in place until May 2.

“Churches and religious activities appear to have been singled out among essential functions for stricter treatment,” Broomes wrote. On April 22, he has a hearing scheduled over the lawsuit filed against the Kansas governor by two Baptist churches in the state and their pastors.

On April 17, a Baptist church and its pastor in Louisville, Kentucky, filed a lawsuit against Kentucky Gov. Andy Beshear, claiming his enforcement of the stay-at-home order on Easter was a violation of their religious freedom.

And the day before Easter, a judge ruled that the Louisville mayor’s efforts to prevent drive-in worship services at On Fire Christian Center were unconstitutional and granted the church a temporary restraining order.

Places of worship are getting some mixed messages in all of this: Some states are allowing people to gather if they remain in their cars, others allow small group settings with social distancing in place, while most people are attending services on their computers with livestreamed programs.

This confusion has come to the Justice Department’s attention, which has said it is reviewing local governments’ regulation of religious services and will take action to address local policies in upcoming days near mid-April.

On April 14, the Justice Department sided with a Mississippi Baptist church that claimed the city of Greenville was preventing it from holding drive-in church services that complied with social-distancing guidelines.

“The facts alleged in the complaint strongly suggest that the city’s actions target religious conduct,” which violates the First Amendment, the department’s lawyers wrote.

U.S. Attorney General William Barr said in an April 14 statement the Justice Department will work to uphold the constitutional right to freely practice religion as states and cities seek to contain the spread of the coronavirus by limiting worship services.

Across the country, Catholic bishops separately announced decisions starting in mid-March to stop public Masses in their dioceses to curb the spread of the coronavirus. One bishop has since reversed this order.

Bishop Peter Baldacchino of Las Cruces, New Mexico, wrote to diocesan priests April 15 saying he was “revoking the suspension of public Masses” he had ordered in mid-March and would allow public Masses that adhered to the governor’s restrictions with services outdoors, in cars or inside with no more than five people present.

In his letter, the bishop said that “while we run a daily count of the physical deaths, we are overlooking those who are dead interiorly.”

“Depriving the faithful of the nourishment offered through the Eucharist was indeed a difficult decision, one that I deemed necessary until I had further clarity regarding our current state of affairs, but it cannot become the ‘status quo’ for the foreseeable future,” he wrote.

The New York Archdiocese made the announcement of no public Masses March 14. Nearly a month later, New York Cardinal Timothy M. Dolan was asked on CBS’ “Face the Nation” April 12 about when the archdiocese might consider reopening its doors and if it would maintain social distancing.

In response, he said: “God gave us common sense, and God told us we have to pay attention to the common good.” He said church officials would listen to experts, physicians, scientists and civic officials.

To those who want to drive until they find an open church where they can publicly worship, he said: “God is telling us use your brain. Use your prudence. Use your common sense. Don’t tempt the Lord.”

Not all Catholics, or Catholic leaders, have viewed the situation in this way.

Cardinal Raymond L. Burke wrote on his website March 21 that it is “essential for us, at all times and above all in times of crisis, to have access to our churches and chapels, to the sacraments, and to public devotions and prayers.”

“Just as we are able to purchase food and medicine, while taking care not to spread the coronavirus in the process, so also we must be able to pray in our churches and chapels, receive the sacraments and engage in acts of public prayer and devotion,” he added.

Some have put their desire to see Catholic churches reopen in the form of petitions. A petition on change.org, signed by 475 people April 14, urges the U.S. bishops to reopen churches saying this could happen with compliance to current local and state restrictions by limiting group sizes through a ticketing or numbering system.

It says: “Grocery stores remain open with certain restrictions because they are considered essential. This is the very rationale under which Mass should remain accessible. Holy Mass is essential.”

Another petition getting some more attention, similarly, asks the bishops to open churches. The petition, called “We Are an Easter People,” was launched by Kari Beckman, founder and executive director of Regina Caeli Academy, a home school program, and Janet Smith, a retired moral theologian.

The petition, signed by more than 26,000 people April 14, describes the sacraments as the personal protective equipment of Catholics of which they are now deprived in the current shutdown orders.

Petitions have not been the only response to this current frustration. There also have been calls on social media for priests to celebrate underground Masses.

Baltimore Archbishop William E. Lori, former chair of the U.S. bishops’ religious liberty committee, said heeding the government’s orders to suspend religious services “does not in any way attack or undermine our faith,” nor does he see this as a violation of religious liberty.

In an interview published April 9 by Crux, a Catholic online news outlet, the archbishop said the current suspension of Masses and other sacraments is happening “out of pastoral love for both our people and our priests.”

He said the church is “doing something important for the sake of our people, for the love for our people, recognizing how painful it is to have churches closed and not to be able to receive the sacraments.”