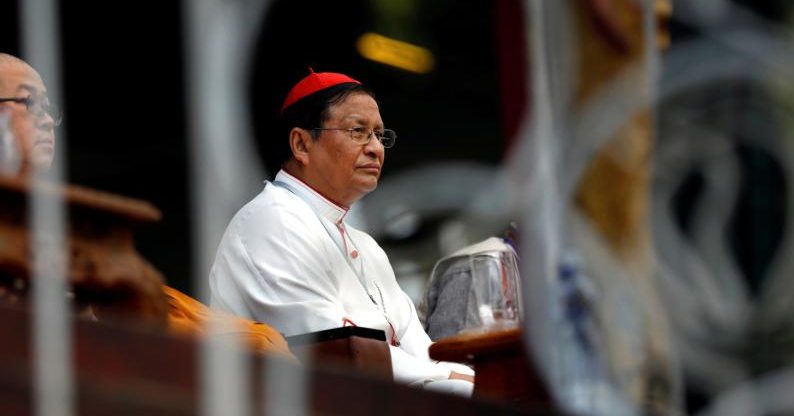 Cardinal Charles Maung Bo of Yangon, Myanmar, attends an interfaith prayer service in Yangon Oct. 10, 2017. Cardinal Bo, head of the Federation of Asian Bishops' Conferences, attacked the Chinese Communist Party for covering up the 2020 COVID-19 pandemic and made it clear he was not criticizing the Chinese people. (CNS photo/Soe Zeya Tun, Reuters)

The cardinal, who made it clear he was not criticizing the Chinese people, said the party’s “failure has unleashed a global contagion killing thousands.”

“As we survey the damage done to lives around the world, we must ask who is responsible?” Cardinal Bo said in a statement released to journalists April 1.

One government has “primary responsibility for what it has done and what it has failed to do, and that is the CCP regime in Beijing. Let me be clear — it is the CCP that has been responsible, not the people of China.”

“It is the repression, the lies and the corruption of the CCP that are responsible,” he said, before warning against any racial vilification of Chinese people.

He also criticized the party’s human rights record that has deteriorated significantly since Xi Jinping took over as supreme leader in late 2012.

“Lies and propaganda have put millions of lives around the world in danger,” Cardinal Bo said. “The CCP’s conduct is symptomatic of its increasingly repressive nature. In recent years, we have seen an intense crackdown on freedom of expression in China. Lawyers, bloggers, dissidents and civil society activists have been rounded up and have disappeared.

“In particular, the regime has launched a campaign against religion, resulting in the destruction of thousands of churches and crosses and the incarceration of at least 1 million Uighur Muslims in concentration camps.”

Cardinal Bo has also been a critic of China’s dam-building project on Myanmar’s rivers, where almost all the electricity generated by hydroelectricity is sent into China.

NEXT: Pope on Palm Sunday: Life, measured by love, is meant to serve others