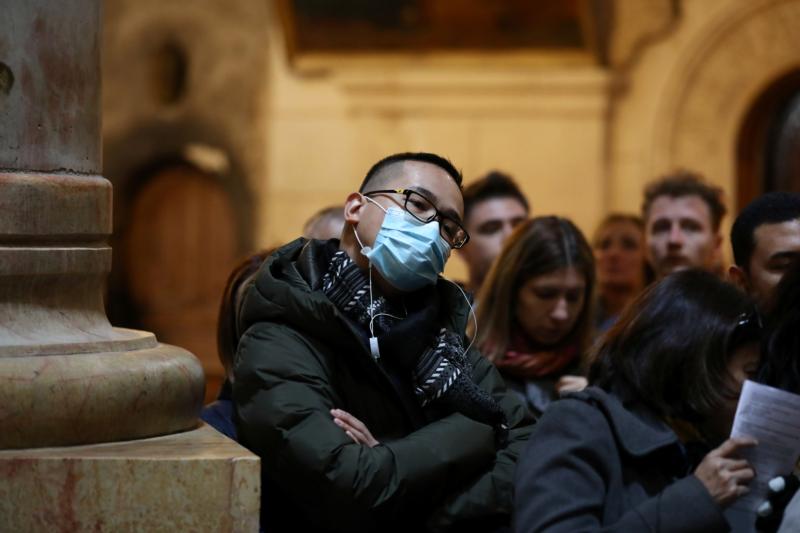 A man wears a protective mask during Mass at the Church of the Holy Sepulcher in Jerusalem's Old City March 1, 2020. With Holy Week celebrations closed to the public due to the coronavirus pandemic, Pope Francis postponed the traditional Good Friday collection for the Holy Land to September, the Vatican announced April 2. (CNS photo/Ammar Awad, Reuters)

VATICAN CITY (CNS) — With Holy Week celebrations closed to the public due to the coronavirus pandemic, Pope Francis postponed the traditional Good Friday collection for the Holy Land to September.

The Vatican announced April 2 that the pope approved a proposal to hold the collection in churches worldwide Sept. 13.

“The Christian communities in the Holy Land, while exposed to the risk of contagion and often living in very trying circumstances, benefit every year from the generous solidarity of the faithful throughout the world, to be able to continue their evangelical presence, as well as to maintain schools and welfare structures open to all citizens for education, peaceful coexistence and care, especially for the smallest and poorest ones,” the Vatican said.

The Franciscan Custody of the Holy Land, an administratively autonomous province of the Franciscan order, uses the collection to carry out its mission of preserving most of the shrines connected with the life of Jesus as well as for providing pastoral care to the region’s Catholics, running schools, operating charitable institutions and training future priests and religious.

The collection, taken up at the request of the pope, is administered by the Franciscan Custody and the Congregation for Eastern Churches, which uses it for the formation of candidates for the priesthood, the support of the clergy, educational activities, cultural formation and subsidies.

The Vatican press office released some details March 4 of how the money was used from the 2019 collection, which totaled more than $8.2 million.

The congregation spent more than $3.2 million on academic, spiritual and human formation of seminarians and priests of churches under their jurisdiction as well as men and women religious; more than $3 million went for subsidizing schooling and educational activities for young people, including at Bethlehem University; nearly $2 million was used to provide emergency assistance and support to people in 10 countries.

The Vatican said that the date of the collection, which takes place on the eve of the feast of the Exaltation of the Cross, “will be a sign of rediscovered hope and of salvation after the Passion that many people now participate in, as well as solidarity with those who continue to live the Gospel of Jesus in the land where ‘it all began.'”

NEXT: Asian cardinal says Communist Party to blame for covering up COVID-19