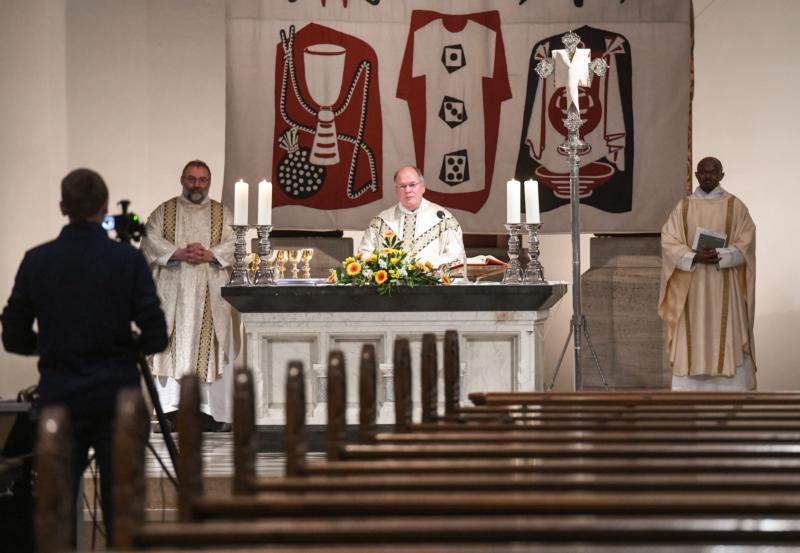 A priest celebrates Holy Thursday Mass via livestream April 9, 2020, at a nearly empty church in Bonn, Germany. The head of the German bishops' conference voiced disappointment that the government decided April 15 the ban on public church services should remain until further notice because of the COVID-19 pandemic. (CNS photo/Harald Oppitz, KNA)

BONN, Germany (CNS) — Catholic and Protestant churches in Germany have responded differently to the federal government’s decision not to lift the ban on public church services.

The Catholic German bishops’ conference voiced disappointment at Chancellor Angela Merkel’s announcement April 15, while the Protestant Church in Germany — a federation of the Lutheran, Reformed and United churches — stressed its support for the government’s measures to combat the COVID-19 pandemic, reported the German Catholic news agency KNA.

After talks with regional government leaders, Merkel said the ban on public church services should remain until further notice, while thousands of shops were being allowed to reopen.

She also announced that a state secretary of the interior ministry would talk with religious communities about the future of public services. Catholic and Protestant leaders were to meet with government officials April 17, and religious representatives said they would propose ways to practice religion while safeguarding worshippers from infection, KNA reported.

Speaking in Bonn April 15, Bishop Georg Batzing, president of the German Catholic bishops’ conference, said he could not understand why the ban should remain in place while restrictions were being eased in other parts of public life, especially given a recent decision by the Federal Constitutional Court on the matter. The court had ruled that the ban constituted a serious encroachment on the fundamental right to religious freedom and should therefore be reviewed continuously.

Bishop Batzing added that Easter had shown that church services gave millions of people guidance and support in the difficult circumstances caused by the coronavirus crisis. He said the ban was a major impediment to the freedom of religious practice.

Separately, he told the newspaper Die Welt April 16 that he could speak for the Catholic Church in stating that it would be able to stick to hygiene standards and social distancing rules in churches.

Bishop Heinrich Bedford-Strohm, president of the Protestant council, said he “expressly supports the continuing need for efforts by society as a whole to limit as far as possible the suffering caused by the spread of the coronavirus.”

Merkel had “expressly acknowledged that the churches had found many ways of celebrating church services over the last Easter celebration without gathering in the churches and thus increasing the risk of infection,” said the Bavarian regional bishop. “We are grateful for this.”

He said he was confident that the discussions with the federal government “will very soon lead to a consensus that will make responsible forms of worship in our churches possible again.”

PREVIOUS: Migrant ministries call for end to deportations during pandemic

NEXT: Living faith without sacraments, community is dangerous, pope says