Migrant ministries call for end to deportations during pandemic 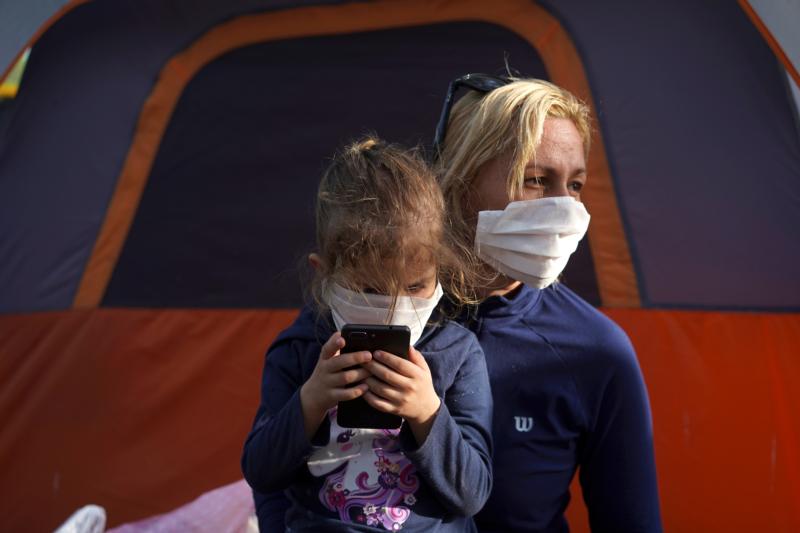 A mother and daughter wearing protective masks who are seeking asylum in the U.S. are seen at a migrant camp in Matamoros, Mexico, April 1, 2020, during the COVID-19 pandemic. (CNS photo/Go Nakamura, Reuters)

MEXICO CITY (CNS) — Catholic migrant ministries of Mexico, Guatemala and Honduras have called for an end to deportations during the COVID-19 crisis, saying the practice exposes an already vulnerable group to health and security risks — especially those sent summarily to countries of which they are not citizens.

In a statement issued over the April 11-12 Easter weekend, the ministries called for the release of migrants held in detention centers while their cases were being processed, citing health and humanitarian reasons. They also asked that governments “promote concrete actions to protect the rights of migrants and refugees” and “not politicize” the coronavirus crisis.

“We observe with worry that Mexico … is allowing its neighbor to the north to deport citizens of any country into its territory, including many without (having received) due process and without offering them the protections necessary,” the statement said, adding that “entire families” were being sent to dangerous Mexican border towns “at all hours of the night, making them easy prey for organized crime.”

“It’s worrisome, the deportation of non-Mexican citizens from the United States, whom Mexico receives without offering a visa to be legally in the country,” the statement continued.

Prior to the COVID-19 crisis, countries to the south of the United States had already implemented stricter immigration enforcement, often at the urging of the U.S. government. The United States, meanwhile, had toughened the process for seeking asylum and had started flying Central Americans, who had arrived at U.S. ports of entry to Guatemala, to apply for asylum there.

Catholic organizations working on migration matters say movement has diminished during the coronavirus pandemic, but also say they have been unable to tend to migrants already on the road or who have been deported.

Migrant shelters have closed their doors due to health concerns, but are allowing those already inside to self-isolate there, said Alberto Xicotencatl, director of the diocesan shelter in Saltillo, some 190 miles from the U.S. border with Texas.

“People arrive at the U.S. border and realize there is a lot security and that it’s impossible to approach it, so they want to return,” Xicotencatl said, explaining that many people who have tried to reach the United States return and knock on the shelter door.

Those arriving at the shelter are provided food and advice, but are not allowed to enter, Xicotencatl said.

The Scalabrinian migrant shelter in Guatemala City said in a March statement it would stop receiving migrants sent back from the United States to seek asylum in Guatemala, saying it lacked the resources to handle potential health problems.

“More than 1,000 migrants have passed through the migrant attention center in San Pedro Sula and often don’t have any way to get home to their families,” said Sister Donde, one of six signatories to the migrant ministries’ statement.

“It’s putting the migrants at risk along with those working with them,” she said.