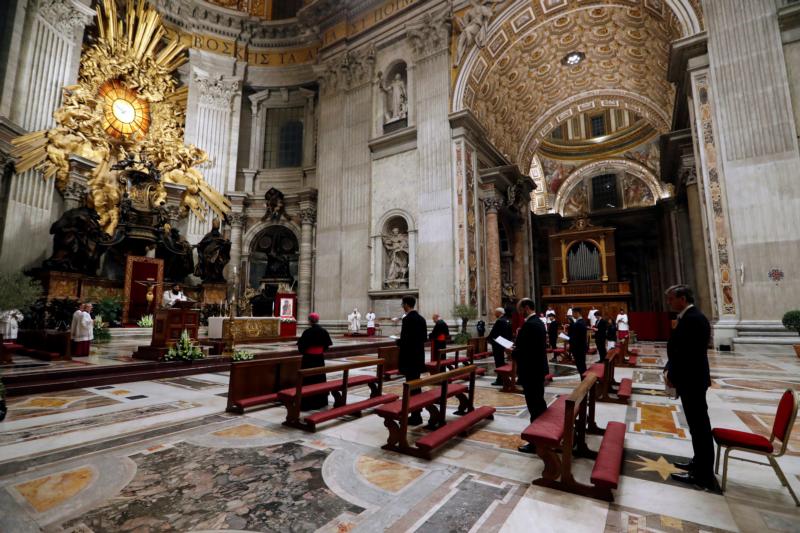 Pope Francis celebrates the Easter vigil in St. Peter's Basilica at the Vatican April 11, 2020. The Mass was celebrated without the presence of the public due to the coronavirus crisis. (CNS photo/Remo Casilli, Reuters)

VATICAN CITY (CNS) — In a dark and nearly empty St. Peter’s Basilica, Pope Francis blessed a fire, lit the Easter candle and called Christians to keep kindling sparks of hope, knowing that Jesus has risen and death will not have the last word.

Easter is a reminder that “God is able to make everything work unto good, because even from the grave he brings life,” the pope said in his homily April 11 during the Easter Vigil Mass.

Like at the earlier liturgies of the Easter triduum, the pope celebrated a pared-down Easter Vigil at the Altar of the Chair in the back of the basilica. With fewer than 20 people in the congregation and just a handful of singers from the Sistine Choir, the gradual lighting of the basilica came from the electric lights overhead and not from the progressive lighting of candles held by the faithful.

Just as in many basilicas, cathedrals and parishes churches operating under pandemic restrictions around the world, there also were no catechumens being baptized, confirmed and receiving their first Communion.

In addition to a few Easter flowers, two strong symbols of praying for God’s deliverance were again present near the altar: The “Salus Populi Romani” (health of the Roman people) icon, usually kept at Rome’s Basilica of St. Mary Major, and the “Miraculous Crucifix,” which usually is housed in the city’s Church of St. Marcellus. 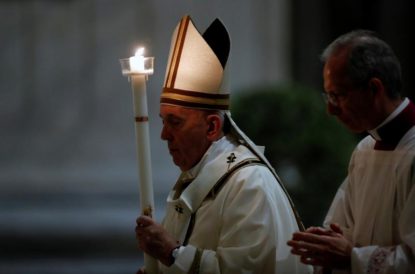 Pope Francis carries a candle at the start of the Easter vigil in St. Peter’s Basilica at the Vatican April 11, 2020. The Mass was celebrated without the presence of the public due to the coronavirus crisis. (CNS photo/Remo Casilli, Reuters)

In his homily, Pope Francis echoed the sentiments of many people mourning the deaths of loved ones because of COVID-19 and facing the tensions of living in prolonged lockdowns.

Even after the Gospel proclamation of the Resurrection, Pope Francis spoke of how, for many people, “we are experiencing, more than ever, the great silence of Holy Saturday.”

“We can imagine ourselves” like the women disciples preparing to go to Jesus’ tomb, he said. “They, like us, had before their eyes the drama of suffering, of an unexpected tragedy that happened all too suddenly. They had seen death and it weighed on their hearts.”

“Then, too, there was fear about the future and all that would need to be rebuilt. A painful memory, a hope cut short,” the pope said. “For them, as for us, it was the darkest hour.”

Still, he said, the women were not “paralyzed” by fear. “They did not give in to the gloom of sorrow and regret; they did not morosely close in on themselves or flee from reality.”

Instead, they prepared spices to anoint Jesus’ body, he said. “They did not stop loving; in the darkness of their hearts, they lit a flame of mercy.”

“Jesus, like a seed buried in the ground, was about to make new life blossom in the world,” the pope said, “and these women, by prayer and love, were helping to make that hope flower.”

“How many people, in these sad days, have done and are still doing what those women did, sowing seeds of hope! With small gestures of care, affection and prayer,” Pope Francis said.

But when they went to the tomb, he said, an angel was there and told them not to be afraid because their beloved Lord had risen from the dead.

Easter, the pope said, gives believers “a fundamental right that can never be taken away from us: the right to hope.”

Easter hope is not simply optimism, rather “it is a gift from heaven, which we could not have earned on our own,” he said.

“Over these weeks, we have kept repeating, ‘All will be well,'” the phrase children wrote on banners and posters hung from windows and balconies all over Italy as the lockdown began a month ago, he said. “But as the days go by and fears grow, even the boldest hope can dissipate.”

But Easter proves that “Jesus’ hope is different,” he said. “He plants in our hearts the conviction that God is able to make everything work unto good, because even from the grave he brings life.”

“Dear sister, dear brother, even if in your heart you have buried hope, do not give up: God is greater,” Pope Francis said. “Darkness and death do not have the last word. Be strong, for with God nothing is lost!”

The pope encouraged all Catholics to open their hearts to the hope and courage that is God’s gift.

And, he said, remember that all Jesus’ disciples, those of his time and Christians today, are given a mission after the resurrection to share that hope with everyone, “for everyone is in need of reassurance.”

“How beautiful it is to be Christians who offer consolation, who bear the burdens of others and who offer encouragement: messengers of life in a time of death,” he said.

“Let us silence the cries of death, no more wars! May we stop the production and trade of weapons, since we need bread, not guns,” Pope Francis said. “Let the abortion and killing of innocent lives end. May the hearts of those who have enough be open to filling the empty hands of those who do not have the bare necessities.”

PREVIOUS: Pope calls for a ‘contagion’ of Easter hope, peace, care for poor

NEXT: Pope prays for women, especially those facing domestic violence