Pope calls for a ‘contagion’ of Easter hope, peace, care for poor 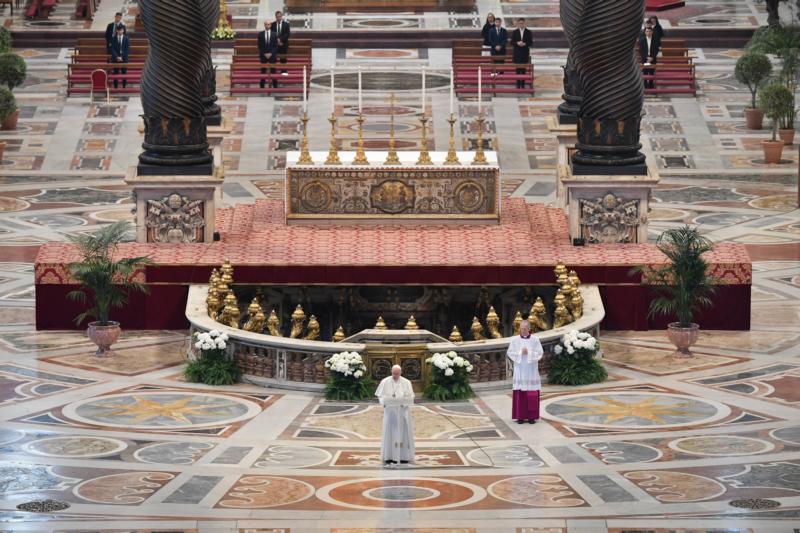 Pope Francis delivers his Easter message “urbi et orbi” (to the city and the world) after celebrating Easter Mass in St. Peter’s Basilica at the Vatican April 12, 2020. The Mass was celebrated without the presence of the public due to the coronavirus pandemic. (CNS photo/Vatican Media)

VATICAN CITY (CNS) — In an Easter celebration like no other, Pope Francis prayed that Christ, “who has already defeated death and opened for us the way to eternal salvation,” would “dispel the darkness of our suffering humanity and lead us into the light of his glorious day, a day that knows no end.”

The pope’s traditional Easter message before his blessing “urbi et orbi” (to the city and the world) still mentioned countries yearning for peace, migrants and refugees in need of a welcoming home and the poor deserving of assistance.

But his Easter prayers April 12 were mostly in the context of the suffering and death caused by the coronavirus and the economic difficulties the pandemic already has triggered.

The pope’s Easter morning Mass was unique; missing were dozens of cardinals concelebrating and tens of thousands of pilgrims from around the world packing St. Peter’s Square. Instead one cardinal — Cardinal Angelo Comastri, archpriest of St. Peter’s Basilica — and a dozen faithful sat inside, one in each pew, before the Altar of the Chair where the pope celebrated the liturgy.

Also missing were the more than 50,000 tulips, daffodils and flowering shrubs that growers in the Netherlands donate each year to turn into a garden the steps leading up to the basilica.

Yet millions followed on television, by radio and by livestream as the Easter “Alleluia” was repeated and the Gospel account of the disciples finding the empty tomb was proclaimed both in Latin and in Greek. 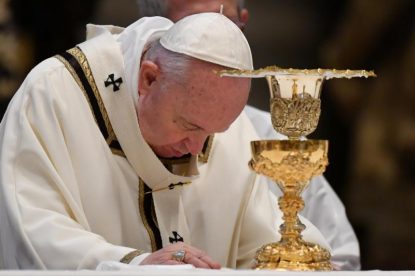 Pope Francis celebrates the Eucharist during Easter Mass in St. Peter’s Basilica at the Vatican April 12, 2020. The Mass was celebrated without the presence of the public due to the coronavirus pandemic. (CNS photo/Andreas Solaro, Reuters pool)

In a clear sign of continuing prayers to God for the end of the pandemic, the sanctuary around the altar again was dominated by symbols of Romans’ faith in divine intervention: the icon “Salus Populi Romani” (health of the Roman people) and the “Miraculous Crucifix,” both of which were carried through the city centuries ago in times of plague.

As is customary, Pope Francis did not give a homily during the Mass but offered his reflections before the “urbi et orbi” blessing.

Instead of standing on the central balcony of the basilica overlooking the square, he delivered the address from the gates leading to the tomb of St. Peter under the basilica’s main altar.

The Easter proclamation “Jesus Christ is risen! He is truly risen!” goes forth from “the night of a world already faced with epochal challenges and now oppressed by a pandemic severely testing our whole human family,” the pope said. “In this night, the church’s voice rings out: ‘Christ, my hope, is risen!'”

The proclamation of hope, new life and victory over death, he said, should be “a different ‘contagion,’ a message transmitted from heart to heart, for every human heart awaits this good news,” he said.

“This is no magic formula that makes problems vanish,” the pope said. “No, the resurrection of Christ is not that. Instead, it is the victory of love over the root of evil, a victory that does not bypass suffering and death, but passes through them, opening a path in the abyss, transforming evil into good: this is the unique hallmark of the power of God.”

The risen Jesus, he said, came forth from the grave still bearing the marks of his crucifixion, he said. “Let us turn our gaze to him that he may heal the wounds of an afflicted humanity.”

Pope Francis prayed first of all for those directly affected by the coronavirus, especially the sick, those who have died and those mourning loved ones after not being able to say goodbye.

“May the Lord of life welcome the departed into his kingdom and grant comfort and hope to those still suffering, especially the elderly and those who are alone,” he said. “May he never withdraw his consolation and help from those who are especially vulnerable, such as persons who work in nursing homes or live in barracks and prisons.”

Pope Francis also prayed for those suffering from solitude because of the pandemic, for those who have lost their jobs, for doctors and nurses treating the sick and for members of law enforcement, who are helping keep people safe.

“In these weeks, the lives of millions of people have suddenly changed,” he said. Some people have found it an opportunity to slow down, reflect and spend time with their families.

But, he said, for many others “this is also a time of worry about an uncertain future, about jobs that are at risk and about other consequences of the current crisis.”

The pope asked political leaders “to work actively for the common good, to provide the means and resources needed to enable everyone to lead a dignified life and, when circumstances allow, to assist them in resuming their normal daily activities.”

When the whole world is suffering, he said, people must pay special attention to the poor, the homeless and refugees.

Pope Francis also called for the lifting of international sanctions imposed on certain countries to put pressure on them, but which now make the suffering of their people unbearable, and for a forgiveness, or at least reduction, of the foreign debt of the world’s poorest nations.

“May Christ our peace enlighten all who have responsibility in conflicts, that they may have the courage to support the appeal for an immediate global cease-fire in all corners of the world,” he prayed. The pope specifically mentioned Syria, Yemen, Iraq, Lebanon, Israel and the Palestinian territories and Ukraine.

“Indifference, self-centeredness, division and forgetfulness are not words we want to hear at this time,” he said. Yet, “they seem to prevail when fear and death overwhelm us, that is, when we do not let the Lord Jesus triumph in our hearts and lives.”

“We want to ban these words forever,” he said, and Easter is the time to start.

NEXT: In time of pandemic, Easter proclaims victory of life, pope says