Italian bishops in talks with government on post-lockdown liturgies 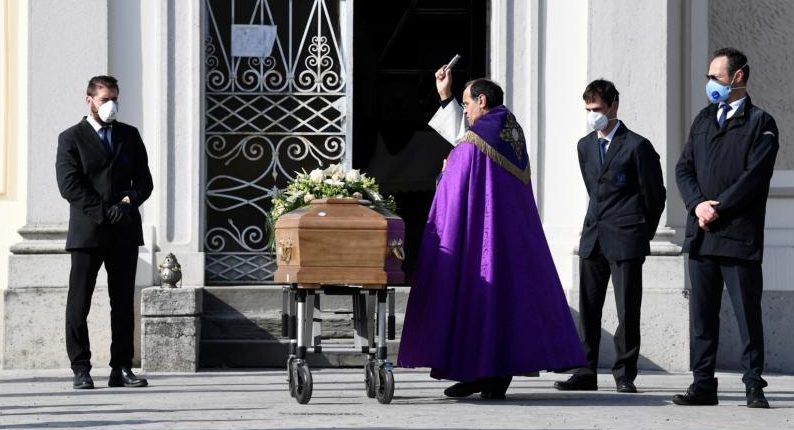 A priest blesses the coffin of a woman who died from COVID-19 in Seriate, Italy, March 28, 2020. The Italian bishops' conference is in discussion with Italy's Ministry of Internal Affairs about a resumption of public Masses, and especially of funerals. (CNS photo/Flavio Lo Scalzo, Reuters)

ROME (CNS) — As the Italian government makes plans for a gradual return to normality after the COVID-19 pandemic, representatives of the country’s bishops’ conference are meeting with the Ministry of Internal Affairs to discuss a resumption of public Masses and, especially, of funerals.

“Too many people are suffering because the death of a loved one today is like a kidnapping” with the body simply being taken away for burial or cremation, said Father Ivan Maffeis, undersecretary of the bishops’ conference.

“Certainly, there are good reasons for this, but we must take on this pain from a human as well as a Christian point of view,” he told Avvenire, the Italian Catholic newspaper, April 17.

Referring to the high toll the coronavirus has taken among people over the age of 75, the priest said, “we cannot let an entire generation — and their families — be deprived of the sacraments and affection, disappearing from life and suddenly becoming invisible.”

The Italian Ministry of Health, in a study based on the 18,641 deaths registered in the country as of April 13, said the median age of the deceased was 79. Less than 2% of people whose deaths were attributed to COVID-19 were under the age of 50.

“There must be a possibility for celebrating funerals, maybe just with close family members, but we cannot not be close to those who suffer,” Father Maffeis said.

The Italian government has extended the country’s lockdown through May 3. Under the lockdown, churches are open for private prayer by individuals who pass that church on their way to or from a valid excuse for being out of their homes, such as going to the grocery store or the pharmacy.

The faithful are not allowed to attend Mass, but the small number of people necessary for a livestreamed liturgy are allowed to join the priest: one deacon, one altar server, one lector, an organist, a cantor and two camera operators, if necessary.

Church funerals have been banned, although a priest and the deceased person’s immediate family may go to the cemetery or funeral home for prayers and a blessing.

Weddings are permitted, but the only people allowed to attend are the celebrant, the bride and groom and two witnesses.

Moving toward the resumption of a full church life would contribute to “social cohesion in the country,” even knowing that a return to normal is still a far-off goal, Father Maffeis said.

The next steps were still under study as of April 17, Father Maffeis told Avvenire, but it is clear that members of the faithful would be able to gather for Mass only on the condition that social distancing could be respected, and the churches are thoroughly cleaned. It is possible that initially people will be asked to wear masks and gloves.

NEXT: Pope pens editorial on joy in the time of coronavirus