Pope pens editorial on joy in the time of coronavirus 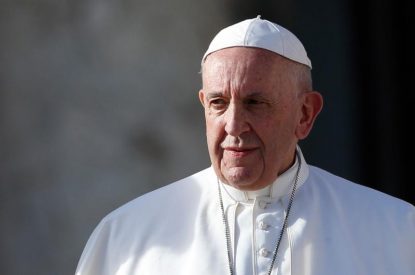 In an editorial published April 17, 2020, by the Spanish magazine Vida Nueva, Pope Francis said Christians are called to be joyful witnesses to Christ’s victory over death during the coronavirus pandemic. (CNS file photo/Paul Haring)

VATICAN CITY (CNS) — Like the women at the tomb whose sorrow turned to joy after the Resurrection, Christians also are called to be joyful witnesses to Christ’s victory over death amid the coronavirus pandemic, Pope Francis said.

In an editorial published April 17 by the Spanish magazine, Vida Nueva, the pope said that those who take part in “the Lord’s passion, the passion of our brothers and sisters, even living our own passion, our ears will hear the newness of the Resurrection: we are not alone, the Lord precedes us on our journey by removing the stones that paralyze us.”

“If there’s one thing we’ve been able to learn in all this time, it’s that no one is saved alone,” he wrote. “Borders are falling, walls are crumbling and all fundamentalist discourses are dissolving before an almost imperceptible presence that shows the fragility of which we are made.”

In his editorial, titled “Un plan para resucitar” (“A plan to resurrect”), the pope also acknowledged that an invitation to be joyful “may seem like a provocation or a bad joke in front of the grave consequences we are suffering due to COVID-19.”

“Like the first women disciples who went to the tomb, we live surrounded by an atmosphere of sorrow and uncertainty that makes us ask, ‘Who will roll back the stone from the entrance to the tomb for us?’ How will we deal with this situation that has completely overtaken us?” he asked.

In today’s precarious era, the pope said, the stone in front of the tomb symbolizes the worry and anguish that “buries hope,” especially for the elderly, disabled people, families struggling financially, as well as health care workers and public servants who feel “exhausted and overwhelmed.”

The weight of that stone, he added, “seems to have the last word.”

Continuing his reflection on the women disciples, the pope said that despite their suffering and fear, they still went out to the tomb and did “not allow themselves to be paralyzed by what was happening.”

While many of the apostles fled, the women carried their spices and oils to anoint Jesus’ body, much like the many men and women today who try to bring “the ointment of co-responsibility to care for and not risk the lives of others.”

“We saw the anointing poured out by doctors, nurses, warehouse workers, cleaners, caretakers, transporters, security forces, volunteers, priests, nuns, grandparents and educators and so many others who were encouraged to give everything they had to bring a little healing, calm and soul to the situation,” the pope wrote.

The good news of Christ’s resurrection, he continued, is what brings hope and joy to all and shows that “our actions — our anointing, our giving, our vigilance and accompanying in all possible ways in this time — are not and will not be in vain.”

“God never abandons his people; he is always close to them, especially when sorrow is most present,” the pope wrote.

Pope Francis said that the current pandemic also has highlighted the need “to unite the entire human family” and that the only way to conquer the coronavirus is through “the antibodies of solidarity.”

“We cannot afford to write the present and future history with our backs turned to the suffering of so many,” the pope wrote. “It is the Lord who will ask us again, ‘Where is your brother?’ and, in our ability to respond, may the soul of our peoples be revealed, that reservoir of hope, faith and charity in which we were begotten and which, for so long, we have anaesthetized or silenced.”

PREVIOUS: Italian bishops in talks with government on post-lockdown liturgies

NEXT: Vatican donates ventilators to hospitals in Syria, sets up emergency fund