On Holy Thursday, pope thanks God for world’s priests 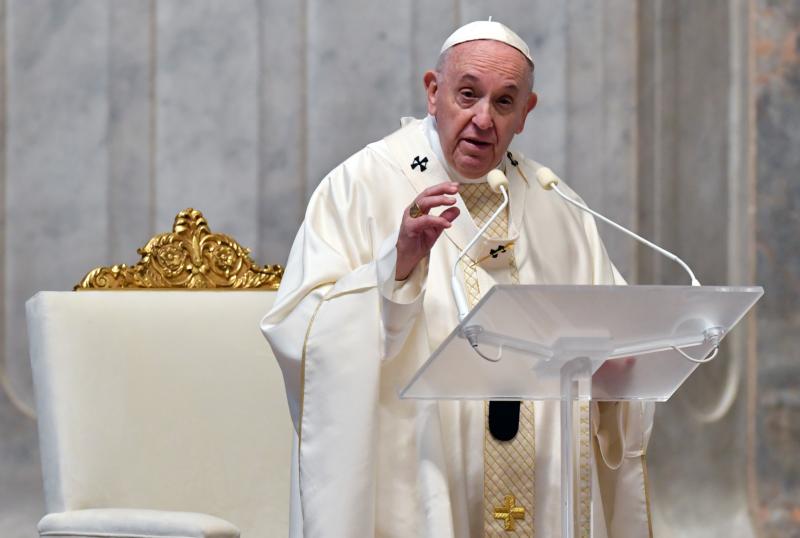 Pope Francis delivers the homily as he celebrates the Mass of the Lord's Supper April 9, 2020, in St. Peter's Basilica at the Vatican. (CNS photo/Vatican Media via Reuters)

VATICAN CITY (CNS) — Unable to invite Rome’s priests to mark Holy Thursday in St. Peter’s Basilica, Pope Francis thanked all priests for their service and called those who died ministering to the sick and health care workers part of the community of “saints next door.”

More than 60 priests have died of COVID-19 in Italy after contracting the coronavirus while carrying out their ministry helping others, he said during the Mass of the Lord’s Supper, broadcast on Vatican media April 9.

Because of the pandemic, liturgical celebrations with the pope have been pared down to the essential, eliminating or postponing optional rites and celebrations.

For Holy Thursday, the usual morning chrism Mass with Rome’s priests was postponed to a later unspecified date; the optional foot-washing ritual was omitted; and the traditional procession with the Blessed Sacrament at the end of the Mass was also omitted, with the Eucharist placed directly in the tabernacle.

In the past, Pope Francis celebrated the Holy Thursday Mass in detention facilities, rehabilitation centers and with refugees.

This year, the pope presided over the Mass in a vast and empty basilica with a handful of assisting deacons and priests, a reduced choir and a small congregation of about a dozen people, including Cardinal Angelo Comastri, archpriest of the basilica.

Because Holy Thursday is usually the day priests renew their priestly vows at the morning chrism Mass, Pope Francis said he could not let the Mass of the Lord’s Supper go by without remembering the world’s priests.

“Today, all of you, brother priests, are here with me at the altar,” he said, speaking off-the-cuff in his homily.

The pope said he wished to hold close to his heart every priest, starting with those who offer their lives for the Lord; those who are servants; and those who are missionaries, taking the Gospel to far-off lands, where some will die.

The pope said he was thinking of those priests who minister to people in small villages, taking the time to get to know everyone. He said one priest he knew was so close to his people, he even knew the dogs’ names.

Others he was holding close in his heart, he said, were all those priests who must bear insults when they are in public because of the “terrible things” other priests have done.

He said he was thinking of all those priests who are experiencing a personal crisis and are in a place of “darkness,” not knowing what to do.

Speaking to all priests, Pope Francis said, “I have one thing to say: Do not be hard-headed like Peter. Let him wash your feet. The Lord is your servant. He is near you to give you strength, to wash your feet.”

When one understands the need to be washed by the Lord, one will become “a great forgiver. Forgive people,” have a big heart, don’t be afraid, he said.

If there are any doubts, “look at Christ,” who offers forgiveness for everyone. “As you have forgiven, you will be forgiven,” he told priests.

“I thank God for you, priests. Jesus loves you. He only asks you to let him wash your feet,” he said.

During the prayers of the faithful, one petition asked God to sustain all those who are suffering and to help “governing leaders seek the true good and people rediscover hope and peace.”

Another petition asked God to “console an afflicted humanity with the certainty of your victory over evil, to heal the sick, console the poor and free everyone from epidemics, violence and selfishness.”

On display, like previous ceremonies, were the “Salus Populi Romani” (health of the Roman people) icon and the “Miraculous Crucifix,” normally housed in the Church of St. Marcellus. Over the centuries, the icon and crucifix have been associated with miraculous interventions to save the city and its people.

NEXT: Citing risks, English bishops tell chaplains not to give last rites