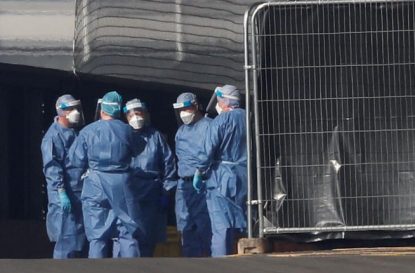 Medical staff are seen wearing protective clothing outside the Nightingale Hospital in London April 9, 2020. The Bishops’ Conference of England and Wales recommended that, because of the lack of personal protective equipment, during the COVID-19 pandemic priests should counsel patients by telephone rather than give them last rites. (CNS photo/Matthew Childs, Reuters)

MANCHESTER, England (CNS) — Because of the lack of personal protective equipment, priests are being told to counsel dying COVID-19 patients by telephone rather than give them last rites.

The new advice from the Bishops’ Conference of England and Wales came amid a surge in the rates of infection of COVID-19 in the U.K., with nearly 1,000 people dying each day.

Bishop Paul Mason of the Bishopric of the Forces, the lead bishop for health issues, said in the April 5 guidance that “it is becoming increasingly clear that giving access to chaplains is difficult due to the scarcity of PPE (personal protective equipment).”

This meant there was a higher risk of a hospital chaplain infecting other chaplains as well as “becoming another link in the chain of infection,” he said.

“Our advice, therefore, is for all Catholic chaplaincy coordinators to ensure that they are in constant liaison with hospital … authorities so that these bodies are aware of the availability of priests,” he said.

“They should ensure that contact details of chaplains and priests are available for telephone support of those who need it,” he said.

Priests and chaplains, he continued, must follow the instructions of the hospitals in which they serve.

Bishop Mason said while “this runs counter to our instinct to provide personal end-of-life sacramental and pastoral care, in the current circumstances, minimizing the spread of the virus must be the priority of all.”

Earlier, chaplains were told they could give last rites if the oil was “applied using a cotton bud, which can be burned afterward” and the priest “suspends his hands over the sick person for laying on of hands.”

Access to the other sacraments already has been halted. Public Masses and most confessions are suspended and baptisms, confirmations and weddings have also been deferred until after the pandemic.

Churches are closed even to private prayer as part of the three-week-old national lockdown.

Similar restrictions exist elsewhere, prompting Pope Francis to suggest a liberal interpretation of canon law to an Italian bishop frustrated because he was unable to gain direct contact with patients to give them absolution.

The pope told British journalist Austen Ivereigh that he advised that bishop to fulfill his priestly duty and “found out later that he was giving absolution all around the place.”

“This is the freedom of the Spirit in the midst of a crisis,” said Pope Francis in the interview published in The Tablet April 8.

“That doesn’t mean that canon law is not important: It is,” the pope said. “But the final canon says that the whole of canon law is for the salvation of souls, and that’s what opens the door for us to go out in times of difficulty to bring the consolation of God.”

PREVIOUS: On Holy Thursday, pope thanks God for world’s priests

NEXT: Pope calls for a ‘contagion’ of Easter hope, peace, care for poor