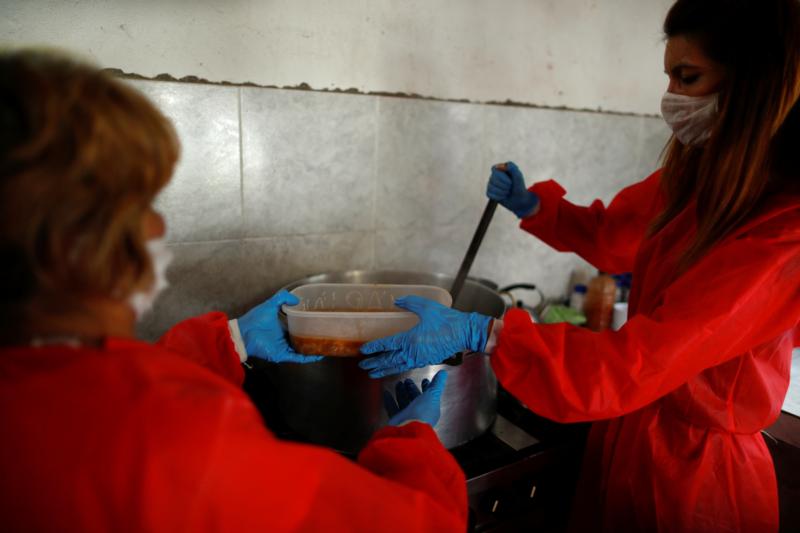 MEXICO CITY (CNS) — The soup kitchen at Father Nicolas Angelotti’s parish in the rough outskirts of Buenos Aires, Argentina, was feeding 1,500 residents daily in recent months, with demand driven by a weak economy and unemployment.

But the demand more than doubled to 4,000 people per day after a coronavirus quarantine was imposed March 20, prohibiting residents from leaving the Puerta de Hierro barrio, served by Father Angelotti, known locally as Padre Tano.

Father Angelotti and this fellow “curas villeros” — the priests serving the shanties of Buenos Aires — work on the front lines of social and economic crises in Argentina, tending to marginalized populations often living without state services.

With the coronavirus pandemic threatening the South American country, the “curas villeros” are once again mobilizing parish communities to tend to the needy. The villas where they serve often were founded as informal settlements and populated by immigrants from neighboring countries.

Parishes in the villas have expanded soup kitchens, giving people their food to go, and turned their churches and other buildings into shelters for the elderly and homeless to self-isolate. They’ve also established places for infected individuals to receive care.

“The message is: Stay in your home, stay in your barrio,” Father Angelotti said. Often, though, “It’s impossible that people stay in their homes due to their social situation.

“These homes are precarious. They don’t have potable water … and there are a lot of people crowded into them. That’s why people are staying in their barrio” as opposed to strictly indoors.

Some of the “curas villeros” met March 25 with President Alberto Fernandez at his residence to discuss the COVID-19 crisis and how to help a population that tended to work in the informal economy, where jobs have dried up and working from home is impossible.

“We were asked if we could work on providing food through soup kitchens and if we could take on the health issue in these barrios,” Father Angelotti said.

“People are staying put in their barrios,” he said. “But parishes in the villas along with the state must attend to these people so they can stay where they are.”

For his part, Fernandez thanked the “curas villeros,” saying in a tweet, “I enormously thank the ‘curas villeros’ for contributing at this difficult time and for making parishes available for isolation for those without a roof over their heads. They’re an example of the solidarity in Argentina we should be building.”

The meeting with Fernandez ended with the priests leading the president in prayer.

Fernandez took office Dec. 10, 2019, amid an economic crisis. Observers say he has looked to the Catholic Church as an ally in setting the country on the right course. He has clashed with some in the church, however, by announcing he will send legislation to congress to decriminalize abortion.

“Now is not the time to talk about abortion,” Father Angelotti said. “We’re all preoccupying ourselves with this serious coronavirus crisis and poverty. We’ll work together.”

NEXT: Catholic leaders urge protection of indigenous during pandemic